WTF Are Paul Ryan and Mitch McConnell Waiting For? 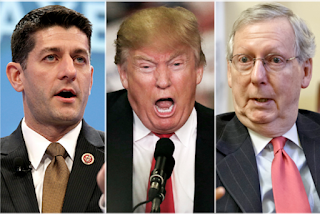 The Founding Fathers created the greatest democracy in the history of civilization consisting of checks and balances through three equal branches of government. But what happens when one of those branches inexplicably abdicates its responsibility? When one branch, in this case Congress, so utterly fails in its oversight capacity to provide the necessary check on another branch which has the nation teetering on the verge of a Constitutional crisis?

What happens when the executive branch, in this case President Donald Trump, is on a clear mission to consolidate power and push us to the brink of authoritarian rule? When there's a complete breakdown in the rule of law. A total assault on our free and open press. A relentless campaign to discredit and undermine the nation's independent judiciary and intelligence community. To turn his base of fiercely loyal supporters into an army in waiting, ready to wage civil war should an effort to stop him materialize.

What happens when there's simply no one willing to step up to stop a self-serving oligarch tyrant from threatening to turn our 242-year-old Democracy into an autocracy.

It's a chilling scenario The Founding Fathers never envisioned. And it's knocking at our door.

Just because it's never happened before is no reason for Americans to think it can't happen now. All bets are off if we experience a true breakdown in the system. Unless something changes very soon--including impeachment, indictment, invoking of the 25th Amendment and/or Democratic control of Congress--House Speaker Paul Ryan and Senate Majority Mitch McConnell might just be responsible for the fall of our great nation.

Defying conventional wisdom, the Republican Party has cast aside every principle it's professed to hold dear--patriotism, national security, faith & family values--in it's unwavering loyalty to and defense of Trump. It doesn't matter that he's an admitted sexual abuser, accused rapist, pathological liar, shameless bully, a perennial sinner, a racist and most likely a traitor. He's their guy, and for better or worse, they've hitched their wagons to him even as they appear headed off a cliff in his vortex of chaos.

No matter that such pathetic sycophantism makes zero sense. No matter that they most likely hate him as much as Democrats do. No matter that they'd prefer a real conservative like Mike Pence. No matter that in this meager trade-off all they have so far to show for it is a suicidal tax reform bill and a stolen Supreme Court seat...a prize they'd have assuredly received from Pence with a lot less heartache and cringe-worthy embarrassment.

So what are Ryan and McConnell waiting for? Are they simply terrified of the base? Not sure how it'll react if they turn on Dear Leader and seek to remove him? Perhaps they're waiting for special prosecutor Robert Mueller's ultimate findings? If Mueller can prove collusion, a cover-up, obstruction of justice and/or money laundering, might that be the moment the party can go to the base and appeal to its traditional sense of of patriotism? Can they, more importantly, will they, make the case at that time that no one, not even the Unites States president, is above the law?

They may not get their chance. Fed-up voters, including those who voted for Trump and now experience buyers' remorse, appear ready to send Republicans packing this November in a blue tsunami. It may ultimately take Democrats to right this wrong and get America back on track...

Posted by The Ostroy Report at 1:58 PM