Confessions of a Hypothetical Trump Supporter 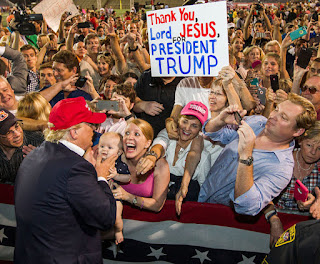 Let's call me "Joe." I love Trump. I voted for him. And I'll do it again in a heartbeat. Because it's time we have someone in the White House who speaks my language and wants to bring America back to the good ole days for white guys like me.

I'm a veteran. A family man. A God-fearing patriot who goes to church every Sunday. But I'm ok ignoring every principle I believe in when it comes to Trump. That's how much I love the man. But let's face it, the only real thing that matters to me is making sure those black and brown people don't overrun our great nation. White is right. And Trump is the country's first president for white people.

I don't make much money at my factory job. And I don't care that Trump's a billionaire who passed that shitty tax bill which makes him and his rich pals richer and ain't gonna put any money in my pocket. Or that he's full of shit about bringing back coal, steel and manufacturing plants. I know that ain't gonna happen. And I don't care.

And I don't care that we're not gonna get a wall. Or that Mexico's not paying for it even if we did get one. I don't even care of I'm gonna end up paying for it with my taxes.

I also don't care that he lies to me non-stop about everything else. That's ok. We all lie. Fake news, right?

I have three daughters. And, man, if someone laid a finger on them I'd kill 'em. Same with my wife and two sisters. And of course my dear mother. I'll kill you if you hurt them. But if ya wanna grab someone else's pussy, go ahead.

I'm 100% military. Three tours in Iraq. My daddy was US Army too. Vietnam. And my gramps fought the Nazi's in WW II. I love my country. But I'm ok with Trump letting Russia attack us. No problem if Putin meddled in our election and is undermining our democracy. You'd think I'd be really upset with that, right? But that's the beauty of being a Trumpster. Nothing upsets us (except black and brown people).

So do you get what I'm talkin' about? I really don't care about any of this bullshit. Not the sexual assaults, the lying, the name-calling, the staff chaos, the bogus tax cuts, the trade war, the cheating on Melania, hush money payoffs, the money laundering, collusion, obstruction of justice, treason...none of it.

I don't care what you find on Trump. Fuck Mueller. It don't matter. Trump's my guy. He's one of us. Remember...he can shoot someone in the middle of....yeah...I think you remember that.

The only thing I do care about is white. And making sure my America, white America, stays that way. The White House is finally white again. Just like it's supposed to be.

Call me a 'racist' if that makes ya feel better. Whatever. Just keep those immigrants and minorities away from me and my America...

Why no comments? Do people read your blog? Just curious? So much vitriol for Trump. And you box all the people who voted for him as racist morons. I beg to differ. I voted for him and I am a far cry from what was written on this post. I’m a white Jewish female who grew up in NYC. My parents were survivors of Nazi Germany. My father survived Auschwitz and Dachau. I was brought up as a democrat. I voted democrat most of my life, but ever quite understood why the welfare system never seemed to get the blacks out of the ghetto, or affirmative action get them out of the ghetto. I never understood why the increase of unwed mothers went up since 1965 and not down. I also hated unions. The NYC teachers Union was a sham. They went on strike for 8 weeks when I was in high school. The teachers never cared about the students. The transit strikes affected my working class parents who both worked. That bothered me. We paid our taxes, yet these city workers would go on strike and get what they wanted and still treat us like dirt. Ever go to the DMV or Post Office? Yet, I continued to be the good democrat and vote for my party, because republicans were bad people andhated blacks. I never thought back that FDR Put the American Japanese in interment camps. Or allow the European Jews in. He basically was an anti Semite. But, I was a good Jewish Democratic lemming and kept voting for democrats. I was brought up to treat people the same no matter what color they are or what religion they are. I was against the war in Vietnam. But, The Weatherman? The Black Panthers? They were murderers. You have to draw the line somewhere. I was brought up to be a free thinker. My mom told me about Herbert Marcuse and his influence on Angela Davis. So even though my mom was a democrat, she knew that going too far to the Left can be very very dangerous. Marcuse is a disciple of The Frankfurt School. And it’s taken them 80 years to change this country . You seem to be a product of it and you are not even aware of it. After 9/11 this country took a turn to the far Left. And you voted in Obama, a man you knew nothing about and gave him carte Blanche to change this country into something that my parents are now rolling over in their graves. You honestly think that people like myself, who have an above average IQ, college educated would have voted for Trump if we thought he was some sort of racist? What I see happening is your side trying to take our 1st Amendment rights away. FB ,Google, You Tube censor any conservative View point. This is quite scary. This is exactly what Hitler had Joseph Goebbels do starting in 1933. I get attacked if I say I voted for Trump. This is like the Brown Shirts attacking the Jews. Illegals had no right entering this country. No one is saying they are all criminals. But, they broke the law. My parents had to come here the legal way. And if you want your11 million to get Amnesty? Then they have to pay a price. They are not allowed to vote. The dreamers are not allowed to vote. Only the dreamers kids will be
Allowed to vote when they become of age. I just love how you think it’s just a bunch of ignorant red necks that voted for Trump. You need to do some more research and meet up with the real people that voted for Trump. I was very familiar with your wife’s work. I had seen her movies. I was so shocked when I had heard about her murder. But, I was not surprised to read who had done it, just as when we have a terrorist attack in Europe, it’s done by a Muslim. Not by an Asian, or Christian, or Asian or a Jew as you have written. And let’s face it, most of the attacks here have been done either by Muslim males or young white men who were registered democrats. Not one of them were republicans or members of the NRA. So before casting that first stone, I suggest some civil discourse. I’ll be curious if this will be posted.