It's Time to End the Daily White House Press Briefings 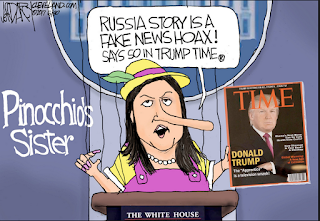 It's been roughly 130 years since the establishment of White House "beat" reporters. The practice of the administration giving these correspondents daily briefings dates back to 1910.  In 1995 Bill Clinton's press secretary Mike McCurry started televising the daily briefings. Today, 23 years later, these gatherings have unfortunately become an embarrassing travesty; a total waste of time and they should end.

Under Trump's media narrative, if the coverage is positive he embraces and retweets it. If it's negative it's attacked as "fake." He doesn't care about the optics of praising the Washington Post and NY Times one day as reporting the 'truth' while shredding them the next day as "failing" and "fake news." He knows his loyal 30% base will lap it up like stray cats with a bowl of milk.

Trump's attack on the media is a direct attack on free speech and freedom of the press. But more importantly, it links to his direct attacks on the Department of Justice and the FBI, and thus the rule of law. The linkage continues with "fake news" as the basis for the "witch hunts" he claims are perpetrated by these law enforcement agencies. And it's led to the firings of perceived opponents including Sally Yates, Preet Bharara, Andrew McCabe and James Comey...while leaving others like Attorney General Jeff Sessions and Assistant AG Rod Rosenstein on thin ice over 'disloyalty.' The ultimate link is to Special Prosecutor Robert Mueller, who's wearing the biggest bullseye of all as the main protagonist in Trump's existential crisis. A+B+C+D=E.

Nowhere is Trump's dysfunctional relationship to the truth more on display than at Sarah Huckabee Sanders' daily press briefings. These sessions have become a cesspool of misrepresentation, deceit and shameless lying.

"No. “You'll have to ask Michael Cohen. Michael is my attorney.”

Contradicting that denial, Trump's new attorney Rudy Giuliani dropped a bombshell Wednesday night when he told Sean Hannity that the president obviously knew about the payoff because he in fact paid Cohen back the $130K.

Giuliani then opened mouth and changed feet the following morning on Fox & Friends:

"Cohen made it go away?" No, this is not an episode of The Sopranos we're watching. This is the Unites States presidency in action. That's way scarier than a gaggle of brooding mobsters. And it certainly did help Trump that his new attorney essentially called him and his former lawyer liars (not for nothin', but if Trump and his lawyers can't make it through Fox & Friends and Sean Hannity without committing political and legal suicide...imagine what Mueller & Co's gonna do to them...).

On Thursday, and again today, Trump tripled-down on the original denial, even claiming that, while "Rudy is a great guy who started a day ago" (it's actually been two weeks), "he needs to get his facts straight."

When asked at Thursday's briefing when she first learned that Trump paid back Cohen, Sanders stated it was during Giuliani's interview with Hannity. She looked foolish. And it certainly didn't instill confidence in a press corp already convinced that everything told them daily is a misrepresentation or a lie.


At the briefings themselves, there's been an unprecedented bankruptcy of facts and truth since Trump took office...starting with former press secretary Sean Spicer's now-infamous anger-management-worthy insistence (and the birthing of Melissa McCarthy's brilliant season-long SNL spoof) that Trump's inaugural crowd was the largest ever. And now Sanders has lost whatever microscopic morsel of credibility she had left. Honesty with the press, and by extension the American public, is sacrosanct in her ability to perform her duties.

Going forward, Sanders is either going to willfully and unapologetically (almost gleefully) regurgitate her boss's lies every day, or continue to look foolish when caught unknowingly in a web of his blatant deception. Either way she's screwed, and so are Americans. America deserves so much more than the 2003-style propaganda of Saddam Hussein and Baghdad Bob.

If Sanders can no longer do her job, which appears to be the case, these briefings should be shut down. Or, reporters need to get tougher. They need to call out the lies more directly and aggressively. They need to demand the truth from this White House. And if they can't get the truth, they should get up, walk out and not return until the next administration moves in.

Posted by The Ostroy Report at 1:47 PM

Nailed it! I’ll save this one for my future grandchildren because one day
they wonder & ask when America made the sharp right turn into trumpland.