The North Korea Debacle: How Trump Put the "No" in Nobel 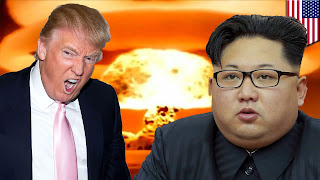 "Everyone thinks so, but I would never say it."

That's how president Donald Trump two weeks ago answered the question, "Do you think you deserve a Nobel Peace Prize?"

Clearly, 14 days is a lifetime in politics. Two weeks, one Nobel and a now-obsolete commemorative coin later Trump, on the global stage, is the sad clown. An ignorant, erratic, diplomacy-bankrupt megalomaniac buffoon who was predictably outplayed by North Korea's Kim Jong Un.

So what went wrong? Why did the June 12th Singapore summit-to-end-all-summits get cancelled? What went wrong is that on one side of the table is a ridiculously-coiffed bloated sociopath dictator with the discipline, maturity and impulse-control of a 10-year-old. And Kim's no better.

Trump, the self-proclaimed King of Negotiation, had convinced himself that, despite the failed efforts of his much smarter diplomatic predecessors, he had the recipe for success: shoot off some nasty tweets; meet with "short, fat Little Rocket Man," (but get him to agree to totally de-nuke beforehand...thus rendering the meeting, and all subsequent negotiating, completely unnecessary), shake hands; stuff face with Bibimbap; and then hop back on Air Force One and Google "How to Apply For a Nobel Peace Prize."

And just like that, 70 years of conflict would end.

(note to Trump: it's never a good thing to call yourself the "king" of anything. It never ends well. Just ask Elvis, Charles I or Michael Cohen's business partner Evgeny "Taxi King" Friedman)

Did anyone with even half a brain really believe this summit would take place? And even if it did, that somehow an inept dictator-wannabe with a bad temper was going to tame his hero who has an even worse temper? That Kim, whose sanction-ravaged, economically destitute country, which has nothing to brag about except nuclear weapons, was suddenly going to totally capitulate to a bloviating bully who has no plan, no vision and no concept of the foreign policy process?

Trump certainly talked tough, made "fire and fury" threats to destroy Kim and his people and had most Americans believing the United States was teetering on nuclear war. But the MAGAsturbators loved it. And that's the only thing that matters to Trump: make the base happy. It was pure Trump performance art.

But unfortunately in the end, Trump gave Kim exactly what he's been craving. He's legitimized him as a world power; mitigated his brutality by calling him "honorable"& "excellent;" and let him play him for a fool. America and the presidency have been gravely weakened as a result.

And the only real impact of fire and fury is that it gave Michael Wolff a great title for a book that made him a fortune. And thanks in no small part to Trump, whose relentless attacks and threats to sue to stop its publication, helped sell bigly bazillions of copies.


So now the big question is, are talks with North Korea really dead? Just one day after news of the summit's cancellation broke, Trump said the two nations are speaking again and that the historic meeting could still happen.

"It could even be the 12th," he suggested this morning.

Trump then fondly referred to the "warm" statement Kim released yesterday (which came after his own romantic overture: "If you change your mind...call me or write"), continuing to sound more like a pathetic jilted lover than the U.S. president.
Posted by The Ostroy Report at 12:08 PM