Dear America: Wake the Fuck Up! 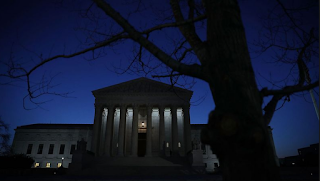 The sudden announcement by Supreme Court Justice Anthony Kennedy of his retirement next month sent terrifying shock waves through democratic circles. But make no mistake: the almost certainty that President Trump will replace the swing-voting Kennedy with a hard-line conservative like Neil Gorsuch, thus giving the court a solidly right-wing majority for the next 30-40 years, should terrify everyone except wealthy, white Christian men.

Those on the about-to-be-royally-screwed list include women, seniors, immigrants, Muslims, blacks, Hispanics, Jews, LGBTQ, students, workers, unions, the sick (especially those with preexisting medical conditions), the poor, the middle class, the environment, small business, campaign finance, our free and open press, the intelligence community, our national security and the rule of law.

Strap yourselves in. It's about to get crazy. The first hot-button issues a newly constituted conservative court will seek to reverse are abortion, same-sex marriage and affirmative action.

At least two dozen red states will assuredly move immediately to ban all abortions given this new judicial landscape. They'll be betting that when these laws are ultimately challenged in the Supreme Court, the 5-4 right-wing tilt will make their Draconian dreams come true in finally overturning Roe v Wade, the 1973 landmark ruling which currently protects a woman's right to have an abortion.

With regard to LGBTQ rights, Kennedy was either the swing vote, one of the swing votes and/or wrote the majority opinion in many critical rulings protecting LGBTQ people's basic human/civil rights and freedom to marry whom they choose: Romer v. Evans, 1996; Lawrence v. Texas, 2003; United States v. Windsor, 2013; Obergefell v. Hodges, 2015. Kennedy's loss in this evolution is devastating.

Kennedy has also been a moderate voice regarding affirmative action. In 2016's Fisher v University of Texas ruling, he was the swing vote in upholding the school's affirmative action policy which considered race as a factor in the admissions process.

To be sure, it's been a lot of fun and games so far for Trumpsters, who've basked in Dear Leader's braggadocious, bulling bluster. You guys love the tough talk, the "un-PC" behavior and the exciting circus-like rallies. But Kennedy's retirement is a game changer. You now need to decide if you want to be one of the gazillion people who'll get hit by the wrong end of the shit-stick from a staunchly conservative court.

And you Trump women: his macho sexist rhetoric, for example, isn't a big deal until you can no longer buy contraception. Or get an abortion. Or have healthcare which covers your reproductive rights. Remember when Trump said women should be "punished" for getting abortions? Think about that. Think about being arrested and jailed for it. Think about sitting in cages, without rights, like those defenseless immigrant kids at the border.

What about your mother, father, sister, brother, son, daughter, aunt, uncle, cousin or best friend who's gay? People you love. Do you want them stripped of their rights? To be discriminated in the courts, in the workplace and by healthcare & insurance companies? To not be able to marry whomever they want?

And to you Log Cabin Republicans... I never understood how, as members of the LGBTQ community, you could support a party that hates you for who you are. Well guess what? It's 100 times worse now. The judicial safety-net you've come to rely on of late, as you comfortably pursue your conservative agenda, will be gone. You will be shamed and scared back into the closet by the party you've dedicated yourselves to and who, in return, systematically demeans you and discriminates against you.

And if you're black or Hispanic and support Trump? It's serious reality-check time. If you haven't gotten this by now, Trump doesn't give a shit about you. Nor does your party. Your world is about to change as this court becomes a 5-4 right-wing majority.

'But the court won't change existing law' you say? No one should feel comforted by the 'doctrine of precedent' known as stare decisis (Latin for “to stand by things decided”). This assumes that the Supreme Court would be compelled to uphold the settled law of the land (i.e Roe v Wade). But Kennedy himself said “stare decisis is not an inexorable command” in his recent South Dakota v. Wayfair majority opinion, a ruling which overturned the landmark 1992 Quill Corp. v. North Dakota use-tax ruling.  And the court just this week reversed the 40-year-old Janus v. AFSCME decision, ruling that nonunion workers cannot be forced to pay fees to public sector unions.

But perhaps the most significant reason to fear a right-wing court is with special prosecutor Robert Mueller's RussiaGate investigation. It's almost certain that the decision on whether Trump can be subpoenaed to testify will come before the Supreme Court. Fill in the blanks. It's chilling to think that, as it did with 2000's decidedly non-Federalist Bush v. Gore ruling which essentially handed the presidency to George W. Bush, the highest court in the land will put partisan politics before national security and the law....especially over an issue with such critical foundational consequences.

Even more alarming, what happens when and if Mueller hands Congress incontrovertible, beyond-a-reasonable-doubt proof that Trump conspired with Russia to steal the election, and has since been engaged in a 24/7 campaign to cover up his high crimes and misdemeanors? What happens if this heretofore complicit GOP continues to turn a blind eye to The Manchurian President's dirty deeds?

The Senate cannot allow Trump to appoint anyone other than another moderate, swing vote justice. And it will come down to Republicans such as Jeff Flake (AZ), Susan Collins (ME) and Lisa Murkowski (AK) to vote their conscience and principles, not their party. With a 51-49 chamber, democrats must pull out all stops to convince at least two Republicans to vote with them. Maybe even dangle the border wall in exchange for a moderate jurist. Or even put Merrick Garland's name back in play for the wall. In the past, Garland had bi-partisan support. If Trump were truly smart and politically calculating, he'd consider how such a nomination would provide a  tremendous boost to his popularity beyond the base; how it would quickly move to repair the divisiveness in the country; and the coup it'd be legacy-wise. But that's not Trump, so don't hold your breath.

Complicating matters for democrats is that Senate incumbents such as Jon Tester (MT), Joe Manchin (WVA), Claire McCaskill (MO), Joe Donnelly (IN) and Heidi Heitkamp (ND) face tough re-election campaigns in states Trump won. For these moderates, they're forced to choose between political self-survival and satisfying their liberal constituents. Won't be a surprise if at least one opts for job-security.

So what to do?

The time is now for mass protests in the streets. Like the 1960's. Non-stop. Voters must demand that politicians vote in a manner that's consistent with the moderate views of an overwhelming majority of Americans...while demanding that Senate Majority Leader Mitch McConnell abide by his own rule of not allowing presidents to appoint Supreme Court justices in an election year (which is how he robbed Barack Obama of Garland's seat). Voters must make this a central tenet of every protest between now and the November midterms. To shame McConnell and Republicans with their own hypocrisy, duplicity and shameless partisanship at the expense of America's national security and best interests. Democrats must give voters a clear choice in the election: country vs party.

The most critical election in U.S. history is four months away. At stake? Everything. Checks and balances. Co-equal branches of government.  Congressional oversight. The rule of law. Democrats must take the House. And hopefully the Senate. Every democrat must get out and vote. The same is true for independents and even Republicans, who staunch conservative George Will implored last week to vote for democrats as a crucial check on Trump.

The U.S. Constitution, and our 242-year-old democracy, is facing it's first true existential crisis. It's being tested like never before in history by the very tyrant the system was designed to prevent from taking control. But if one or even both co-equal branches of government abdicate their Constitutional responsibilities, American democracy as we know it is officially over.

Autocracy is at our doorstep.

America, wake the fuck up!
Posted by The Ostroy Report at 6:45 PM