Dear Democrats: WTF Are You Waiting For? 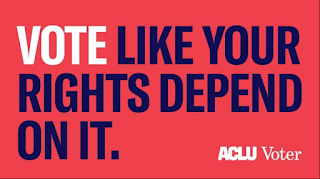 I was talking the other day with someone who's active in the Congressional midterm elections. A Democrat. I asked her how she thinks it looks for the party on Election Day.

"Feeling good," she sheepishly said. "But it really all depends if our people get out and vote."

Yes. The concern is always about turnout. But it shouldn't be now. Given all that's at stake, you'd think Democrats would be so fired up that they'd camp out at the polls the night before as if Led Zeppelin reunion-concert tickets were going on sale at 6am. Because the truth is, if they're not fired up enough to vote now, what...the...fuck...are...they...waiting...for?

Let me be perfectly clear: America is on the verge of autocracy. We are led by a sociopath. A malignant narcissist. A dangerous demagogue. A rabble-rousing, race-baiting dictator-wannabe bully who's shattered all norms, boundaries and any sense of decorum and decency in his rapacious quest to consolidate power and self-enrich. A sick, twisted, reincarnated Morton Downey Jr who derives a creepy masturbatory thrill from instigating and dividing people.

Which is why the upcoming midterm elections are everything. Everything.

Does your vote matter? Yes.

Can you change the course of history with your vote? Yes.

Election Day is the one day in the year when the billionaire and the janitor have the exact same power. That any democrat wouldn't exercise this power during Trump's reign of terror is mind-numbing.

Do democrats really need a reason to vote? Consider how Trump and the Republican Party have turned America into a rancid cesspool:

For the first time in our nation's 242-year history our democracy is having an existential crisis. Checks and balances only works if the checks do their job. So what happens when Congress is complicit and allows a kleptocrat despotic traitor to consolidate power? What happens when the Supreme Court has a tie-breaking justice who believes the president is above the law and should be insulated from subpoena and indictment? Tyranny happens, that's what.

Is Trump a tyrant? Yes. Is Mitch McConnell a tyrant? Yes. Has the GOP-led Congress cravenly abdicated its oversight role in exchange for tax cuts, deregulation and a conservative judiciary? Yes.

The only way to stop this terrifying spiral into fascism is for democrats to vote. And vote en masse. To break records. To win the House with a huge enough margin to scare the shit out of Republicans that 2020 will be an even bigger bloodbath...where both the Senate and White House will be in major play.

But make no mistake: the main reason to take back the House is to give Democrats the ability to conduct investigations into Trump's corruption and treason. To have subpoena power. To protect special counsel Robert Mueller and his RussiaGate investigation. To return law and order back into the political landscape. To protect democracy. To impeach if necessary. And to provide the check that's so desperately missing right now.

Because the alternative is chillingly unthinkable...

Posted by The Ostroy Report at 1:07 PM

While Justin Trudeau may be biting his tongue when it comes to his dealings with President Donald Trump, one of his predecessors is not. Jean Chrétien, who served for 10 years as Canada’s Prime Minister and was elected in the majority three times, isn’t holding back on the Trump criticism in his new book, My Stories, My Times.

The book — due out October 23 — is full of anecdotes from the former PM’s time in office as well as his political musings about the current world order. Naturally, his views on Trump stand out.

“It’s been very sad to observe the monumental error our neighbours to the south made in November 2016,” he writes.

“I fear that Hillary‘s defeat, and the arrival of the fanatical Trump, mark the true end of the American Empire. You can understand why Aline [his wife] and I are so happy to have the Clintons as friends, and almost as proud to be removed as far as possible from the unspeakable Donald Trump.”

The friendship between the Clintons and the Chrétiens is well documented since the majority of Bill and Jean’s terms overlapped and they remained close in the years following. The former Canadian leader clearly has another beef as well when it comes to bonds formed while he was in office — NAFTA, which he was instrumental in renegotiating and ratifying in 1993. Now the USMCA, Chrétien calls the new trade agreement “a lot of talk for nothing.”

“He [Trump] changed the name and not much else,” Chrétien told The Canadian Press in a book interview. “[The USMCA is] a little bit of an adjustment but basically we still have a free trade agreement with them that will work about the same way that it was working before.”

“I feel that their influence is going down very rapidly … If you want to be in isolation, that’s fine. But you have less influence,” he said, adding that in his travels he’s noticed a distinct shift in the way other people view the U.S. He told CTV that there’s “a lot of laughter” which is something “you have to worry about.”

“You know, empires disappear,” he adds. “A lot of people are nostalgic about the British empire. A lot of people in France still dream of Napoleon; he’s dead since a long time. Life is like that.”

I will vote in November. I may even vote a straight Democrat Party ticket, just because it seems like the right thing to do. However, based on the gap between their rhetoric and their actions over the last forty years, I have no great expectations of a Democrat Congressional majority, made up largely of neo-liberals with a smattering of actual progressives standing by in numbers too small to matter, to do anything to significantly change the game.