Dear Trump Supporters: WTF Is Wrong With You? 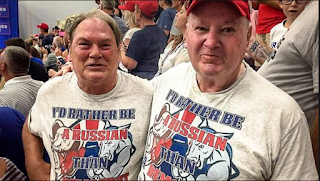 Donald Trump once famously boasted that no matter what he did you'd still support him. Even if he shot someone in the middle of NYC's 5th Avenue. Not for nothing, but that outrageous claim could only have been made if Trump thinks you're all a bunch of fucking morons who are simply too stupid, loyal or both to ever hold him accountable for anything...even murder.

Are you that stupid and loyal? So far you're proving him right. With flying colors. And bells and whistles.

Ok, so Trump hasn't committed murder...yet. But he has:

*defended neo-Nazis and white nationalists
*caged children
*promised to build the wall and have Mexico pay for it...then demanded YOU pay for it
*disrespected and attacked war heroes like John McCain (even as he lay on his death bed)
*conspired with Russia to steal the election
*obstructed justice to cover up the conspiracy
*put an accused sexual-abuser and rapist on the Supreme Court
*refused to believe sexual-assault victims while defending and protecting the accused
*lied to the middle-class about getting huge tax cuts (remember "You'll see it in your paychecks starting Feb 1!"?)
*lied to you about giving you better and more affordable healthcare than Obamacare
*lied to you that coverage for preexisting conditions will be protected

*increased the deficit to $797-billion, the highest in 6 years
*increased the national debt to $25 trillion
*started trade wars which has negatively impacted farming, manufacturing & automobile industries
*violated the Emoluments Clause and has enriched himself since day-one
*created unparalleled chaos and turnover (70%+) in the White House
*called the Mueller probe a "witch hunt" despite 30+ indictments & 6 convictions including his top aides
*stood on a stage with Putin and defended him while calling our intelligence community liars
*said he's "in love" with Kim Jong Un
*lied to you that there is "no longer a nuclear threat from North Korea"
*allowed Saudi Arabia to murder and dismember a journalist and U.S. resident without consequence
*repeatedly disrespected and attacked the FBI, Department of Justice, the intelligence community and our independent judiciary
*claimed the media is "the enemy of the people"
*incited violence at his rallies
*praised a convicted criminal for body-slamming a reporter
*cursed like a pimp and allowed Kanye West to say "motherfucker" in the Oval Office
*lied to you over 4000 times (according to Washington Post fact-checker)
*treated you as if you're all a bunch of brainwashed ignorant fools

That's quite an impressive resume.

So can you please explain how you still support this crooked, corrupt treasonous monster after all these unconscionable offenses? How you could stand behind him at rallies as he disrespects and undermines democracy and the Constitution? How you could let him lie to you about his undying support of veterans, the military, the police and law & order as he attacks war heroes, POW's and Gold Star families while praising convicted criminals for violent acts? Worse, how you could stand behind him and laugh and cheer like pathetic sheep as he does it?

What kind of Americans are you? Why kind of humans are you? What kind of parents are you? What do you tell your children when you come home from these rallies? Are you proud of your president and what he says and does? More so, are you you proud of how you've acted at these mob-like events? Do you teach your kids to behave like Trump? Do you encourage them to lie, cheat, steal, bully, assault women and mock those less fortunate? Do you teach them to 'respect the law' by treating convicted criminals like heroes? Do you tell them violent men are "your guys?"

And how about all the pussy-grabbing, sexual assaults, rapes and the "boys will be boys" culture? Do you have daughters? Wives? Girlfriends? Mothers? You ok with them having their pussies grabbed by rich, powerful, famous men who think they're entitled to it? You ok with them being sexually-assaulted and raped? Or is it ok only when it's someone else's kid or spouse who's attacked, discredited and degraded?

Lastly, are you religious? Do you go to church and synagogue? Is this what they preach there? Is this what they tell you God wants? That this is the way to behave? That this is how you treat your fellow man and woman? Do you go to church on Sunday and pretend to be compassionate, tolerant, God-fearing faith-based Christians only to head to the Trump rally the next day to engage in angry, hateful unholy behavior like complicit frauds as he demonically breaks every sin in the bible?

And...would you really rather be Russian than Democrat?

So I ask you yet again: what the fuck is wrong with you? Because for the life of me I cannot figure you out.