Donald Trump is a Coward 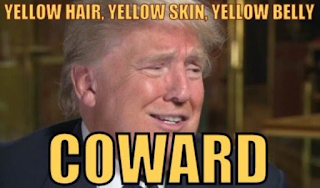 My neighbors' sons were the kids who went off to fight and die in Vietnam. Trump and his pals used their rich daddies' connections to dodge the draft...so they could stay home and wage their own 'personal Vietnam' against STD's.

This backdrop explains Donald Trump. He's the proverbial rich entitled brat born on 3rd base who thinks he hit a triple. The son of an unemotional, affection-adverse but hugely wealthy real-estate tycoon who filled his son's wallet but left his heart empty.

Trump is often called a bully. But like most bullies, he is a weak, feckless coward. He's been a coward his whole life. And he'll be a coward till the day he dies. He fears confrontation. He's a self-proclaimed "counter-puncher" who talks a tough game on Twitter and at rallies of his brainwashed base, but who folds like a $2 lawn chair when face-to-face with his opponents and America's enemies.

Trump is on a perpetual mission to prove himself. Thus the constant bragging, exaggerated self-promotion and outright lying to embellish his accomplishments. The result is an ethical, moral and truth-bankruptcy which fuels this dysfunction. He's a shell of a adult human who craves the attention, praise and credit he never received growing up. And he's terrified. Always. Like a frightened little child. So he lashes out, at anything and anyone, in order to feel even the slightest kernel of self-worth.

Which is why it's never enough for Trump to merely state an accomplishment. He must also claim it's 'the biggest, the best and that everyone before him is stupid and inept and could never have done what he just did.' The hole in his soul is so large that nothing can ever fill it....not even the fact that he's one of only 45 people in America's 242-year history to hold this revered position. He constantly swirls in a dizzying vortex of self-loathing, put-downs and an insatiable quest for validation. He's a prisoner of his rapacious Id. I'm sure it's as exhausting for him as it is for us.

But most of all, Trump is a coward. A shameful, despicable coward.

A coward who cages children.

A coward who bullies and degrades women.

A coward who's used his power to sexually-assault women.

A coward who belittles and name-calls his opponents.

A coward who mocks disabled people.

A coward who pathologically lies like a terrified cornered rat.

A coward who scapegoats people of color to divide the country.

A coward who boasts that "body-slammers" are "his guys."

A coward who calls the media "the enemy of the people" to distract from his personal scandals.

A coward who incites violence and chants of "lock her up" at his rallies.

A coward who shares a stage with and defends Putin while publicly disrespecting and undermining our intelligence community.


A coward who sits by and does nothing after Saudi Arabia savagely murders and dismembers a journalist and U.S. resident.

A coward who's filled his staff and cabinet with generals because he thinks that surrounding himself with military men projects the true strength and bravery he's never had.

A coward who's in awe of dictators and strongmen because he sees them as the "tough guy" he never was but so desperately wants to be.

A coward who's compelled to mock and disparage war heroes like John McCain (even as he lay dying) to compensate for his own lack of military valor and heroism.

A coward who's selfish, self-serving and puts his own personal interests before those of America.

A coward who's traded America's reputation, values and defense of human rights for money.

To be sure, Donald Trump has many truly repulsive, reprehensible qualities. But his cowardice, as president of the United States, Commander-in-Chief and Leader of the Free World, reigns supreme.