Stick a Fork in Trump. It's Over 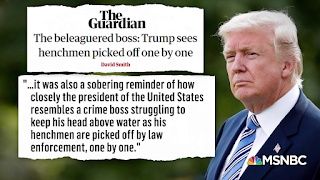 Not even two years into Donald Trump's presidency, every aspect of his personal, political and business life is currently under massive Federal criminal investigation. Let that sink in for a moment.

Trump's family, Foundation (which was dissolved Tuesday morning by the New York Attorney General), business, campaign, inauguration, transition and administration are all facing the long arm of the law.

Trump's demise has been long overdue. We've longed for it from the early days of his reprehensible birther campaign against Barack Obama, to his June 2015 'Mexicans are rapists' explosion into the race, to his relentless attacks since on civility, decency, humanity, the rule of law, our democracy and everything America stands for.

Throughout his entire life Trump has escaped accountability. Born with a silver spoon, he was handed everything by his rich daddy. He then spent decades at the helm of his grossly over-hyped 'real-estate development empire' (in reality just a small licensing business which threw it's name on everything including office buildings, hotels, casinos, airplanes, steaks, vodka, water, games, mortgages and magazines"...virtually all of which have been bankrupted and shut). It is a 40+ year-old family-run enterprise that, as we're now learning, more resembles a crime family. And The Donald answered to no one.

Trump now has special counsel Robert Mueller, NY's Southern District, attorneys general in NY, DC, Virginia and elsewhere hot on his trail and a Nancy Pelosi-led House about to subpoena and investigate the shit out of him. For the first time in his life, when Trump barks "JUMP!" he's hearing "sit down and shut the fuck up." If his relentless manic, desperate"WITCH HUNT! HOAX! NO COLLUSION!" tweet-storms are an indication, it's driving him insane. As the one person who knows more than anyone the extent of his High Crimes and Misdemeanors,  Trump surely knows the end is near.

If you think Tuesday's dissolution of the Foundation doesn't signal the beginning of Trump's presidency ultimately dissolving...I have some time-shares in Trump Hotel Moscow to sell ya...
Posted by The Ostroy Report at 1:53 PM