A Preview of Trump's State of the Union Speech 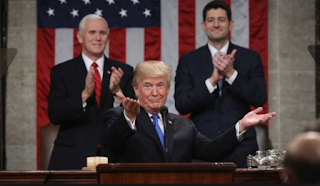 My fellow Americans...esteemed Republican members of Congress, Democrats, the five good Supreme Court Justices, any generals who still like me, and the fake-news enemy-of-the-people media. I'm excited to be here tonight to tell you, quite frankly, of all the amazing things I'm doing. And believe me...there's many bigly accomplishments. More than any president ever. Especially Obama.

Let's start with the government shutdown. Or, as many people are calling it, and this is true, and they're right,..the Schumer/Pelosi shutdown. It's all the Democrats' fault. Now when I said weeks ago that I would "own" the shutdown"...that I'd take the "mantle"...that I wouldn't blame "Chuck" and the Dems...that's not what I meant.

Look, I'm a builder...and, everyone knows this, but nobody likes to talk about it, I'm the biggest most successful builder...nobody builds buildings like Trump...everyone loves my buildings...the Chinese, the Saudi's...the Russians...and by the way, there was NO COLLUSION!...the real collusion is with Hillary and the Dems...and so I build things. I 'own' things. And, Mickey Mantle was always my favorite baseball player. The Mick! Ya gotta admit, they don't make 'em like The Mick anymore, am I right! A bit of an ugly drinker though...but we won't talk about that. Lastly, when I said I wouldn't blame Chuck, I actually meant that I would blame Chuck.

We need a wall, people. And I'm not talking about the one between me and Melania. I'm talking about a big beautiful wall. A barrier. Or steel slats. Or Levolor blinds, beaded curtains, Roman shades. Maybe some hanging bamboo. I love bamboo! I love the way it sounds...bam-BOO! Those brown people from Mexico, Honduras, El Salvador...and many people don't like using this word...invading America. They're thugs, gang members, terrorists. Millions and millions of terrorists. They're BAD HOMBRES! They dress like hungry women and children to fool us. It's gotta stop. And it's gonna stop right here and right NOW! It's a national emergency!

This emergency is so strong, so severe, so dangerous that I'm willing to wait days, weeks, months even years to stand firm against Nancy on this. Gonna wait to see what she does. Then I'll see what Mexico does. Then I'll see what Rush, Laura, Ann and Sean think. Then I'll read Breitbart. Then maybe see what Bobby Knight and Kimye think. Then I'll wait some more. And then, if everything else fails, I'll declare a national emergency. I can totally do it. Totally legal. I maybe definitely think I can probably do it for sure. And Brett and the SCOTUS boys will back me up, believe me.

Shall we talk about the stock market? It's the greatest market ever. It's done so well since I became president...if you don't count last year, which was all the Fed's fault. But I think it's already up 7,000 points in January.

How about Syria, huh!? We won! We beat ISIS! Don't believe the fake news disgusting fake awful fake FAKE FAKE FAKE news when they tell you ISIS just killed US troops in a suicide bombing. It's all fake. Fake fake fake. What was it that George Bush said..."Mission accomplished!"

And let's not forget that North Korea is no longer a nuclear threat.

And how I got MBS to admit he had nothing to do with Khashoggi's murder.

And how I strong-armed Putin into his very strong, powerful denial of election meddling.

I so got this shit, people!

Lastly, let's talk about the 800-lb orangutan in the room. No, not me... the big fat witch-hunt. The hoax. Let me tell you, and this is the truth, and nobody knows the truth like me...everyone is lying! All of them! The Department of Justice, the FBI, the CIA, Mueller and his 49 angry Dems, the Southern District of NY, the local state AG's, the courts, the media, Democrats, Flynn, Cohen, Manafort, Comey, everyone else...they're all just part of a very bigly massive conspiracy to take down your president. They're just angry that we beat Hillary so badly...by 8-million popular votes I think. I am the only one telling the truth, believe me...

Our standing in the world is great.

We made America great again!

Posted by The Ostroy Report at 6:19 PM