What Trump Will REALLY Be Saying Tonight 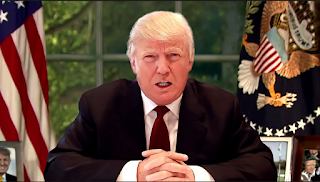 Everyone but Donald Trump's brainwashed base knows that his "address" to the nation Tuesday evening regarding the "crisis at the border" will be a reprehensible performance piece of lies, deception, misinformation and fascist propaganda. Here's what he'll really be saying...

My fellow Americans. Three years ago I launched my campaign for the presidency. I never thought I had a chance, believe me. I'm a 4th-rate real estate "developer", former realty tv host and fake billionaire. I have no political experience, no vision or core beliefs and all I care about is myself and money. And, I have the temperament of a 5-year-old. To say I was unfit for the job is a gross understatement. But what I quickly understood, that my 16 opponents didn't, was that millions of Americans are stupid and racist. And I used that to my advantage. Bigly.

Let's face it: my base doesn't give a shit about politics. They'd rather watch paint dry than listen to a discussion on infrastructure, the economy or foreign policy. They're Jerry Springer fans. Adrenaline junkies. They like drama and excitement. They go to hockey games just for the fights. They're small-minded, and like watching bullies taunt the weak and helpless. Especially if they're black, brown, Muslim and Mexican. They're angry white people who believe minorities and immigrants have taken away their American dream. Bingo!

Welcome to "Make America Great Again." Which of course means "Make America White Again." I turned these racist fools into an army of red-MAGA-hat-wearing mental zombies.

So I promised to build a wall. A "big beautiful wall" which would keep out those horrible criminals. And I promised them that Mexico would pay for it. It became our mantra. I whipped 'em into a frenzy like Freddie Mercury at Live Aid. I'd say "Who's gonna pay for the wall?" And like pathetic sheep they'd scream "MEXICO!!"  I did this over and over and over again at all my rallies. And when I'd see them getting bored or ready to leave I'd whip 'em up again with it.

Of course, it was all just a lie. I knew there'd be no way Mexico was gonna pay for it. But I knew somebody would ultimately have to.

Which brings us to tonight. My big "crisis at the border" address. Obviously, there's no crisis. Not now, and not before the midterms when I fear-mongered non-stop about the "dangerous caravan" about to "invade America." It's all bullshit. But you already know that. But like I said, somebody's gotta pay for that wall.

Yes. I bullshitted the base. Now I'm fucked. My legacy, and hopes for a 2020 reelection, are flushed down my gold-plated toilet if I don't build that damn wall. So I need to lie again about "thousands of terrorists crashing through the Mexican border"...blah blah blah. You know the drill: MS-13 gang members, thugs and terrorists coming to kill your kids and rape your women. IT'S A CRISIS I tell ya!

And if Congress doesn't give me the money to fulfill this idiotic campaign promise then I'm gonna declare a "national emergency" and just take money from the military and use it for the wall. An abuse of power? You bet. A Constitutional crisis? I really don't care, do you? Let them sue me. It'll go to the Supreme Court...where Brett and the boys will cover my ass.

No one's gonna tell me what to do. No one. I am above the law. I am the fucking law. I'm Trump, dammit, and I'm gonna run America like I run my businesses: sloppy, chaotic, incompetent, dysfunctional, dishonest, drowning in debt, bankrupt, law-breaking and dictatorial.

(breaks out into loud, uproarious maniacal laughter)
Posted by The Ostroy Report at 11:41 AM