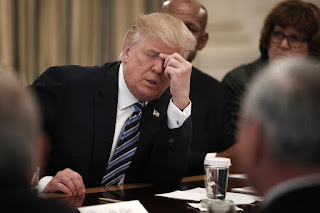 As I first wrote over a year ago, Donald Trump will resign before his term is up.

Trump’s political and legal problems are mounting. And no amount of Tweeting will make them go away. He is now just the third president in history to be impeached. And despite what he and his defenders would like to believe, he’s facing a punishing Senate trial which likely won’t end in conviction and removal, but will be a campaign and PR nightmare.

The evidence against Trump is beyond incriminating. It’s devastating. And while he and Senate Leader Mitch McConnell continue to push for a quick trial with its shameful predetermined verdict, the public keenly sees one party desperately fighting to expose the truth while the other fights like animals to hide it and obstruct justice in a massive coverup. In the court of public opinion, Trump’s a goner.

In a new poll released this week a record-high 55% of Americans now want Trump removed from office…an increase from 48% just last week. Voters aren’t stupid. They’re paying attention. They care. And this number’s going to keep rising until McConnell can no longer ignore it.

Trump the narcissist has spent decades crafting and protecting his image. He will stop at nothing in doing so. This includes pretending to be his own publicist to leak exaggerated claims of his wealth and sexual prowess to pathological-lying and gaslighting reality. He hates being perceived on any level as a failure and loser, and is obsessed with boasting of massive success and “winning.”

Since his impeachment earlier this month we’ve witnessed Trump’s colossal emotional meltdown on TV and on Twitter, where he’s been breaking his all-time highs (as much as 125 tweets in one day) with attacks on House Speaker Nancy Pelosi, Senate Minority Leader Chuck Schumer and the ‘validity” of his very impeachment…a ludicrous charge he’s been leveling since Pelosi’s brilliantly withheld the Articles of Impeachment until McConnell agrees to conducting a fair trial with direct evidence and witnesses.

Trump also knows he’s lost much of his base (defined as everyone who voted for him in 2016). Gone are moderate Republicans, independents, college educated women, suburban women, minorities and many youth and seniors. His math and path to re-election no longer adds up.

Trump also lives in mortal fear of conviction in various states for his many financial crimes. He still fears the Mueller probe’s criminal referrals to the Southern District of NY, Eastern District of VA and elsewhere. And, he knows better than anyone that so much more evidence of his High Crimes and Misdemeanors will inevitably come out between now and the election.

Furthermore, Trump, the most immature, undisciplined, impulse-control-bankrupt, chaotic, self-destructive president to ever occupy the Oval Office, is sure to continue breaking laws. His hole will get deeper and deeper. He simply cannot help himself.

Which is why he will resign. He knows he’s going to lose. And lose big. Perhaps even in the largest, most humiliating landslide in American political history. And he will not subject himself to that.
Here’s how it’ll go down: When it’s become abundantly clear that he’s going to be a loser, and as the long arm of the law comes marching down the hall with threats of indictment, and more importantly when McConnell and the party abandons him, Trump will do what he always does: lie and gaslight. He’ll cut a deal (generously afforded out of respect to the office) and will craft a narrative that feeds his ego and allows himself a sensational, grandiose, self-soothing out. It won’t matter one bit that’ll be all bullshit.

And here’s what he’ll likely say: “Many people are saying, but nobody’s taking about it…and you all know it better than me…that I’m gonna win this election bigly…the polls show it, even the fake-news media’s predicting it….probably gonna be the biggest win ever in the history of elections. Democrats, Crazy Nancy, Cryin‘ Chuck…they all know it and fear me winning again. But ya know what? Even though I’d win YUGE by millions and millions of votes… I don’t want it. Washington is a swamp and I’m tired of fighting these animals who are destroying America. I got what I wanted. I won the biggest victory ever in ’16 and we all know I’d do it again. I’ve proven what a winner I am! But now I’m gonna go back to my business where I’ll make $100-billion next year. And play a lot of golf…because, as you know, I never got to play much while I was working non-stop so hard for you! So, I’m outta here, suckas! You can have this crappy job and old, small shitty house! Politics is for losers! Nobody wins like Trump! Believe me…”
Posted by The Ostroy Report at 12:01 PM

Interesting take! I actually had a very similar train of thought when President Obama was elected. His terms were a struggle for different reasons, of course, but I would have bet a large sum that he wasn't going to run for re-election due to the difficulties of operating effectively in such a position. Much as you have described how Trump may react, I felt that Obama didn't have what it would take to persevere. Much to my surprise - he managed to not only make it through one term, he made it through two quite effectively!