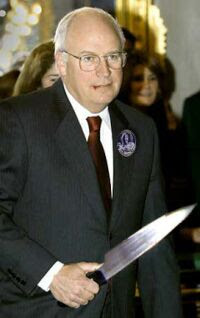 Moments after President Bush on Saturday transferred his presidential power temporarily to Vice President Dick Cheney just before undergoing a routine colonoscopy, Cheney took control of the military and declared that he is the new president of The United States. He then immediately ordered the military police to arrest Bush once he came out of sedation. This is the first time in our nation's history that a president has been overthrown.

Cheney, who's been in a veritable power grab with Bush ever since they won the 2000 election, said in a statement released to reporters that under the "unitary executive" theory he has the power to interpret Constitutional law as it pertains to the executive branch; that the Constitution creates a "hierarchical, unified executive department under the direct control of the President."

"So, I guess that makes me the top dog around here, the boss-man" Cheney snarled, with that familiar dastardly laugh out of the side of his mouth. "Hey, possession is 9/10's of the law, right? Nobody told him to go get his ass probed, did they? Cheney's in charge now!," he sniveled.

"Look, everyone knows who's really been running this country since 2000, so just expect more of the same great leadership...just more brutal and much faster...muh ha ha...MUH HA HA...." Cheney maniacally shrieked from the balcony overlooking the White House lawn.

When asked if there was any truth to the rumors that Senate Majority Leader Harry Reid, House Speaker Nancy Pelosi and Sen. Ted Kennedy were about to be arrested and that the US was planning to invade Finland, Cheney just stared and let out his trademarked smirk.
Posted by The Ostroy Report at 10:41 AM

GODDAMMIT. I choked my morning coffee reading the first couple of lines. Don't do this on a Saturday morning, when these bastards usually pull their dirtiest tricks! This is too serious!

"Hey, possession is 9/10's of the law, right? Nobody told him to go get his ass probed, did they? Cheney's in charge now!," he sniveled.


Not a good fraction to use--
9/11's much more appropriate for Cheney, don't you think?

I don't understand the Dark Lord's need to formally seize power like this, since everyone knows he's been the "power behind the throne" and has been calling the shots for the past six years. Where is Luke Skywalker now that we need him?

Ostroy,
Is this your best attempt to freshen this place up ? lame, at best.

If Cheney really made these comments it just goes to show you what a sick sob he is. Even in jest - it is sick.

He thinks it's a joke that they can do whatever they want and we can't stop them.

WELL, IT'S TIME TO STOP THIS BUNCH OF
CRIMINALS!

Keep up the good work. I visit your site regularly and enjoy reading your posts. Thanks for your effort.

Dick is such a DICK!