"The Devil Came on Horseback:" A Must-See Documentary on the Crisis in Darfur 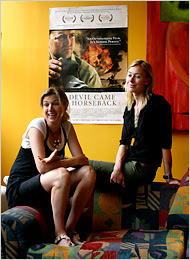 The Genocide in Darfur in the Western region of Sudan rages on. Since 2003, hundreds of thousands have been killed at the hands of the Sudanese-sponsored Janjaweed militia. Millions have been displaced, fleeing their beloved homeland for a presumably safe haven in neighboring Chad and elsewhere. Those who remain have been systematically raped, beaten, tortured and brutally murdered. Clearly learning little or no lessons from the Holocaust, the Western world has done little to stop the carnage. But a new documentary released this week, "The Devil Came on Horseback," hopes to serve as a call to action, raising awareness of the atrocities so that they might be prevented from ever happening again.

In it's review this week, the NY Times wrote: "Brutal, urgent, devastating — the documentary “The Devil Came on Horseback” demands to be seen as soon as possible and by as many viewers as possible. An up-close, acutely painful call to action, the movie pivots on a young American, a former Marine captain named Brian Steidle, who for six months beginning in the fall of 2004 worked for the African Union as an unarmed monitor in Darfur. What he saw in Darfur was unspeakable. And then he returned home, his arms, heart and head filled with the images of the dead."

"The Devil Came on Horseback" is indeed an extremely important film; incredibly powerful and necessary. And it will bring tears to your eyes. And hopefully those tears will lead to action.

The film has special meaning to me on another level. The film's directors, Annie Sundberg and Ricki Stern, with whom I just had the pleasure of meeting over lunch in Manhattan, were the recipients of the inaugural "Adrienne Shelly Excellence in Filmmaking Award" and financial grant presented by the Adrienne Shelly Foundation at the Nantucket Film Festival in June. We at ASF commend Annie and Ricki for what they've accomplished with "Devil" and look forward to more prolific works from them in the future.

"The Devil Came on Horseback" is currently playing in Manhattan, Philadelphia, Rochester, MN and is rolling out to cities across America.

We urge you to get involved and support any one or more of the many organizations making an impact in Darfur. Here are a few we recommend:


About the Adrienne Shelly Foundation:
The The Adrienne Shelly Foundation is a tax-exempt, non-profit organization dedicated in my wife's honor to help carry out her spirit and passion, with the goal of assisting women filmmakers. Adrienne was brutally killed in NYC on November 1, 2006. Through the Foundation, her commitment to filmmaking lives on. We've established scholarships, grants, finishing funds and living stipends at NYU's Tisch School of the Arts/Kanbar Institute of Film; Columbia University; American Film Institute; NY Women in Film and Television; the Independent Feature Project; the Nantucket Film Festival; and the Sundance Institute. To learn more, and to support the mission, please visit our website. Thank you.
Posted by The Ostroy Report at 9:05 AM

Darfur is another place where the US and others have dithered about helplessly as thousands suffer genocide. A disgrace!
Pity they have no oil.

While I support instituting a no-fly-zone in the Sudan, perhaps under NATO auspices, more boots on the ground cannot be sustained. I support Barack Obama's Friday statement. I am linking your post to a Darfur-centric blogging friend to make sure he knows about The Devil Came on Horseback.

I'll be sure to watch for this documentary, and I hope it will help pressure our government into taking some sort of action, instead of the pathetic lip service the present administration has been offering.