A Few More Words About the iTard Nation 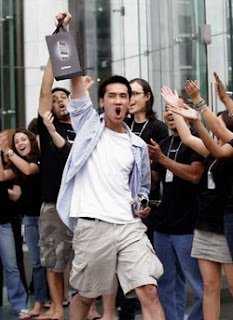 A point of clarity is obviously needed on my piece from yesterday. Apparently, some have completely misinterpreted my central point. Let me be very clear about one thing in particular: my issue is not with Apple, Inc. Many who've posted comments are indeed correct. Steven Jobs is a brilliant entrepreneur. A true visionary who's created revolutionary products that have had tremendous positive impact on society and have literally changed the way we live, work and communicate. Products that I myself are in awe of and use every day. On this point we clearly agree.

But Apple and Jobs are not what's wrong with our culture today. It's the people who seem to care more about high-tech toys and gadgetry than what really matters in the world. Next time you walk down the street observe how many people have a cell phones stuck to their heads or iPod earphones in their ears or Blackberrys between their fingers. We've become a society of people who seem lost in the technology. Go into a cell store and see just how much time our youth devotes to choosing the right phone. Yet, in the 2006 election just 25% of them felt it was worth choosing a new Congress. Go into a coffee house and see how many people are talking to each other versus being alone with their laptops.

Our young people today are Instant Messaging and texting their way through life. Email has become the new "relationship-building" technique. Teenagers who haven't a clue about the Iraq war know about the battle between Apple/iTunes and Universal/Vivendi. The point is, that gleeful young man in the photo represents much of our disaffected, disillusioned, disconnected and disinterested youth. How do we get these young people inspired to show as much enthusiasm for global warming and politics as they have for their iPods? Say what you want about the 60's generation, but back then their relentless protesting brought an end to war. And the media back then focused on truth and justice and brought down a president. Today, our media is fixated more on Paris Hilton, Anna Nicole Smith and who's on line to buy iPhones. Just think: what if the media obsessed on Iraq and the Bushevik crimes and corruption. Might our youth become less indifferent? Might they become as outraged as they are when they learn iTunes may lose a third of its music content?

No, it's not Apple's fault, nor Jobs'. I hope I'm now making that very clear. But the main point is still that until our society takes as much interest in world affairs as in its precious tech-toys, leaders like Bush and Cheney will continue to misuse and abuse the nation's trust and piss on the Constitution.
Posted by The Ostroy Report at 7:30 AM

As you said so well, "until our society takes as much interest in world affairs as in its precious tech-toys," governmental abuses--like those of the current administration--will continue. I recall from my education that an informed citizenry is necessary for a democracy to function. But how do you create interest in abstract, difficult-to-grasp political and social ideas (like the role of the World Bank in economic development, for example) when a shiny, new, flashy gadget commands so much more publicity and attention? I wish I knew.

i am with you in your observation that our society is in love with technology and possibly missing the bigger picture.

i am as guilty of it as anyone to be honest.

but i take hope when i read stuff like this

like everything, there are pros and cons to this new world.

like it or not, we should embrace it and steer it in the right direction.

because it's too ingrained and too powerful a movement in our society to stop.

Bush/Cheney & Clinton/Gore are perfect examples of corruption taking advantage of their power while Americans are sleeping.

If you are tired of the corruption in politics, stop voting for Democrats and Republicans. Don't give your vote away to a party that will take advantage of it. If you think one party is better than the other, you are a fool. Both are made of liars, both are corrupt, neither will bring America to its fullest potential.

Democrats and Republicans are taking advantage of the fact that most Americans rather watch Paris Hilton, Hollywood movies, and the latest 'reality show'. We are sleeping at the wheel while both parties steer us into a brick wall.

If every American threw away their phony allegiance to Democrats and Republicans and actually researched candidates, things could change. Candidates for the DNC and RNC are the same...wolves in sheep clothing.

We are almost at another anniversary of 9/11, except this one is slightly different.

What will the Democrats have accomplished in the same amount of time that liberals will claim Bush should have prevented 9/11 without the patriot act, without wiretapping, without infringing on illegal aliens 'right' to stay in America?

The knife cuts both ways. Democrats claim Bush should have stopped 9/11 in 8 months, yet the Democrats will have accomplished absolutely nothing in the same amount of time. Of course, liberals will blame the Republicans because its an easy excuse. Just like Patti and Marty who refuse to cite any sources for their claims...the phony excuse is as good as any. Perception is reality.

Well, your headline in the original piece read, "Apple is Creating a Generation of iTards". I think those of us who interpreted your comments as implying that you had an issue with Apple weren't misinterpreting. I think we just read what you actually wrote.

If that wasn't what you meant to say, you should offer a correction. But accusing us of misinterpreting your words is, hm, how shall I put it? "Bush-esque"?

In the authorization for the Iraq war how many legislators stood against it? How many legislators voted against the PATRIOT act? How many, before or after 9/11, said anything about the GOP’s the mantra of “Wag the Dog like the movie” to attack Clinton after he sent missiles into Afghanistan on 8/20/98?

By and large, silicon valley has supported democrats, yet, according to you, their consumers are responsible for Bush.

What courage to blame your own supporters. Keep it up, maybe you can leverage their brand loyalty to the GOP.

PS. Don’t you find it ironic that W has such low support and all the GOP candidates still cater to the hard right and declare W infallible, yet you attack your own supporters.

PPS. Don’t you find it ironic that yesterday’s piece was titled “Apple is Creating a Generation of iTards” yet, now you say it was not about Apple or its fans.

PPPPS. Don’t you find it ironic that Fake Steve now has more credibility and interest in the political arena than you do.

PPPPPS. PS I am not a crackpot.

so you admit you were merely using the iphones hype to draw attention to yourslef. So long as were clear on that...

Your post was titled Apple is Creating a Generation of iTards

You went on to say, We have become the iTard nation. A subculture of bazillions of disciples of their guru and chief Tard Steve Jobs, who've become fallen-down drunk on the "i" kool-aid. iMac, iPod and iPhone is their religion.

In the same post you made a link to your wife's movie trailer on apple.com.

Now you are redacting with my issue is not with Apple, Inc. ... Steven Jobs is a brilliant entrepreneur. A true visionary who's created revolutionary products that have had tremendous positive impact on society and have literally changed the way we live, work and communicate. Products that I myself are in awe of and use every day.

Andy, I think you should pack up your report since you obviously don't understand the power of public writing, especially one that criticizes others while falling short of the same principle that you use to criticize.

No one would have figured out from your original report that you were critical of Sony or Microsoft or BMG or Tommy Hilfiger or FCUK or DKNY or Abercrombie Fitch or McDonald's or Burger King or Universal Pictures or Disney or General Motors. Your post was targeted at Apple, its products, its CEO, its advertising, and its users. You used a pejorative iTard in the same way that Apple uses its trademarks, and you indulged in blog-whoring that devalued and diluted what you stand for and your message.

Your subsequent follow-up comment does nothing to show that you realize and learn from your mistake.

I just now read your articles after returning from my vacation.

iTard!! Did you make that up? Really?? It is perfect. My grandson is one.

How can you say that? When supposed "iTards" go to cnn.com or turn on MSNBC to hear the latest breaking news about Paris Hilton, they are also pummeled with actual news. I think you are underestimating the American public.

We are always telling our kids to pick up the phone and call their friends. Instead they send a text message and wait for a response. Perhaps I'd be the same if I were a teen today but I have my doubts.