Bush Says "We're Kicking Ass" in Iraq. This Maniac is More Delusional Than Ever 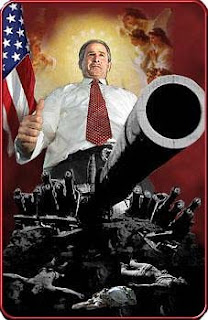 The long-awaited, but highly predictable Iraq war assessment from Gen. David Petraeus arrived in Washington Monday in his 6 1/2 hours of testimony before Congress. And guess what? We need to stay in Iraq, indefinitely. And President Bush's troop "surge" is a success despite being "uneven" (whatever the heck that contradiction means). Surprise, surprise. The major takeaway: he recommended a pullback of 30,000 troops by next Summer, but warned that a quicker, more extensive troop withdrawal would have grave consequences.

Let's give the General a bit of credit. His testimony could've been a helluva lot more partisan and one-sided. While trying to support his boss's mission, his testimony was somewhat "uneven" in and of itself. Yet groups like Moveon.org, which took a $70,000 full-page NY Times ad yesterday with the header "Gen. Betray Us," charge that Petraeus' testimony is laden with inaccuracies, lies and calculated cherry-picking of statistics (remind me again....if an Iraqi gets shot in the front of the head it is counted as a sectarian-related death or not?)

But the facts on the ground in Iraq, and the testimony of Petraeus, did not stop our maniacal, war-mongering president from taking his Lies and Delusion Tour to Australia:

Can you believe that? Kicking Ass? What is this fool smoking? Bush is a pathological liar, whose lack of intelligence and curiosity, and whose mounting lies, deceptions and delusions, make him more of a threat to our security and to world peace than any terrorist. He is an embarrassment to our great nation, and is woefully unprepared and ill-equipped to lead. He should be impeached. Where are the Democrats!??

So, while Petraeus confuses lawmakers this week with warnings and progress reports, we can now add "We're kicking Ass" to "Mission Accomplished" and "Bring it On" in Bush's "Greatest Bloopers & Blunders" collection.

By the way, it should be noted, ever since the surge strategy was hatched in January, it was always the plan to draw down the 30,000 troops by next Summer. For Petraues and the Busheviks to now be portraying this pullback as a sign of progress is an absolute misrepresentation of the facts.

On another note, we could use your help at The The Adrienne Shelly Foundation. We are a tax-exempt, non-profit organization dedicated in my wife's honor to help carry out her spirit and passion, with the goal of assisting women filmmakers. Adrienne was brutally killed in NYC on November 1, 2006. Through the Foundation, her commitment to filmmaking lives on. We've established scholarships, grants, finishing funds and living stipends at NYU's Tisch School of the Arts/Kanbar Institute of Film; Columbia University; American Film Institute; Women in Film; the Independent Feature Project; the Nantucket Film Festival; and the Sundance Institute.

http://www.apple.com/trailers/fox_searchlight/waitress/trailer/
Posted by The Ostroy Report at 7:11 AM

One of the facts not mentioned in the news reports I've read and seen yesterday and today is that, even if the "surge" is continued and the 30,000 troops leave Iraq next year under the best possible scenario, the number of troops still there will be the SAME as before the surge.

Would someone who is obviously more enlightened than I please explain to me exactly how this misbegotten effort reduces the overall number of US troops in Iraq? All it will do is pull the "surge" troops out of Iraq and leave the same number there before the "surge" began! Doesn't this seem like a giant shell game?