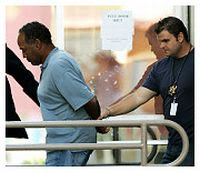 On June 12, 1994 football legend O.J. Simpson's wife Nicole and her friend Ronald Goldman were brutally murdered in the entrance way to her Brentwood, CA condo. Simpson was subsequently arrested and charged with the double-homicide, in one of the most sensational, highly publicized murder trials in American history. And in what is now a legendary case of prosecutorial ineptitude, juxtaposed with sheer defense-team brilliance, Simpson was astonishingly found not-guilty in the biggest travesty of justice ever.

I don't typically write about subjects non-political, but I am compelled to do so today. The brutal, savage murder of a spouse is, sadly, something I know all about first-hand. Back in '95, I remember watching tv in a crowded bar as the verdict was delivered. And I stood with about 150 people in stunned silence as the words "not-guilty" were read twice. I remember feeling sick to my stomach. Physical ill. And I will never forget the look on the other patrons' faces as we all quietly stared at each other in utter disbelief. A murderous beast had just been given a free ticket back into society. This monster, O.J. Simpson, had literally gotten away with murder. It was appalling. He was later found guilty of wrongful death in a civil trial.

In the years since, this animal flaunted his freedom in our collective faces as he travelled, played golf and relished in life's pleasures that Nicole and Ron can no longer enjoy thanks to his murderous hands. And through bizarre statements and interviews, he would frequently maintain his innocence with bravado and arrogance. He would also go on to write a book, "If I Did It," in which he brazenly describes the murders in chilling detail from the eyes and mind of someone who we're told didn't do it but who is creative enough to image how the real killer did . Could this cretin be any more offensive?

And now the former athlete, actor and still-savage murderer has been arrested again on multiple felony charges in yet another bizarre, twisted crime: an alleged armed robbery of sports memorabilia collectors in a Las Vegas hotel room. Witnesses say an enraged Simpson barged into the room with a posse of thugs, guns ablaze, and made off with both O.J. and non-O.J-related merchandise. He's being held without bail and charged with two counts of robbery with use of a deadly weapon, conspiracy to commit robbery, burglary with a deadly weapon, two counts of assault with a deadly weapon and coercion. He faces three to 35 years for each count.

O.J.'s new arrest touches many raw nerves. I for one am tired of his arrogance and his assumption that he gets to commit violent acts with impunity. I'm angry that this homicidal maniac got off Scot-free 13 years ago. I'm angry that his brutish, selfish, senseless actions took two children away from their mother, and a wonderful, loving son away from his family. I'm angry that our criminal justice system failed us miserably back then and allowed a murderous monster to live amongst us. And mock us. I'm not shocked though of his latest outburst. The criminal beast that is O.J. Simpson is O.J. at the core. Nicole and Ron's murder simply brought to light his violent history and the criminality that raged in him his whole life. The many 911 calls and photos over the years of a battered Nicole prior to her senseless death is proof of that. But he was smart. He had us duped with his big friendly grin, his Hertz commercials, his heroic movie roles and of course his iconic football career. But once a monster, always a monster.

And now we have that familiar image of the fallen star being lead away in handcuffs for yet another crime for which he'd like us to believe he is once again the victim. He was merely conducting "a self-imposed sting operation," he claims. Just like he was going to hunt down and find the "real" killers after the 1994 murders. The latest defense is just more of the same delusion from this crazed assassin.

There's a lot at stake here for society now. Will Simpson merely hire another Johhny Cochran-like genius to confuse the hell out of a jury so he can get back to the golf course? Will the prosecution be able to find a jury that can be impartial given Simpson's monumental infamy? Will Simpson face an Al Capone-like fate and spend the rest of his life in jail for something not nearly as heinous as his notorious master crimes? But does it all matter? Aren't we all just simply damned lucky to have this second chance at justice, which could result in the Goldmans and the Browns and the rest of us getting to see this vicious animal rot in prison until his own death? Let's hope justice gets served this time around.

http://www.apple.com/trailers/fox_searchlight/waitress/trailer/
Posted by The Ostroy Report at 6:58 AM

I agree with you, but I hate the fact that we were fed OJ crap once again 24/7 while there are so many other important things going on in our government. The tv stations spent way too much time on this story as usual.

You'd think that after his acquittal in the criminal trial and his loss in the civil trial, Simpson would have the discretion to quietly fade into the background. Instead, he puts himself in the glare of the spotlight again and again with his "fictional" book, and now with his crimes in Las Vegas. I'd hope that the Las Vegas prosecutors are far more adept at their job than were the LA prosecutors!

great article--but a minor correction. the verdict was read in 1995, not 1994. As for the Goldmans---they SUPPORT the "if I did it" book because of the money. Isnt this a case where money shouldnt matter and they should go strictly from principle? I hate this mother fucker. Ive wished for the last 13 years someone would kill him, but our society only kills people who strive for peace...John Lennon, Martin Luther King Jr, Medger Evers, etc... but this murdering son of a bitch is still living, still committing crimes. Either lock him up or end his life PLEASE so I can celebrate!

This murderous thug is behind bars. Oh Happy Day!

I have always thought the LA prosecutors "took a dive" and let OJ go free because they did not want any riots. Marcia Clark and Christopher Darden went way beyond incompetence, as Vincent Bugliosi has pointed out.
"Try really hard to put these gloves on so you can go to prison for life."

How as it all gone so wrong. Today, without question, important people, celebrities like OJ, corporations, et al, are getting away with all sorts of crimes and autrocities, while innocent people are held in jail for years and some eventually executed although not guilty. What has gone so wrong? And, now the new appointee as Attorney General recently wrote an article saying he did not believe habeas corpus should be restored. Of course habeas corpus is the basis of our freedom and democracy. And, at a Kerry meeting at a Florida University, a young man asking Kerry a difficult question about his quick "cave in" after the election, was attacked and "tazed" (sp?) by five or more burly cops and then jailed. Kerry, our hero, stood on stage and watched without saying a word. Justice has lost its way. HELP.

Anon at 9:00 pm, it appears you are the only sane person posting thus far (other than myself).

The O.J. trial was a purpose-driven media frenzy created to throw another road block toward racial and ethnic reconciliation in this country. By engendering racial/ethnic strife, the NWO can continue to work its machinations while the American masses involve themselves in such trivialities as the so-called "Trial of the Century." The biggest injustice ever, Andy? That's comical - it probably wasn't the worse thing that month. Lastly, how many of you cowards would call O.J. a nigger to his face? Thought so . . . .

It is so rare that I get to quote Thomas DeQuincy, but this is the moment. "If once a man indulges himself in murder, very soon he comes to think little of robbery, and from robbing he next comes to drinking and Sabbath-breaking, and from that to incivility and procrastination."

hey fact checker(journalist) you might want to know Al Capone did not die in prison as you compare your hopes for OJ. Al died in Florida a free man, free from the law anyway, but dying in the end stage of his syphilis disease. Almost certainly insane, but not dead in prison as you allude to.

I appreciate your view. We have heard so much about this particular case, have become disgusted and also desensitized to the entirety of it all.

Ostroy,
Please tell us about Britney Spears next.

He won't get away with it this time. He has a crummy lawyer. Plus, the savage idiot is on tape revealing himself for the criminal abuser he is. He can't deny anything. Well, he can, like the liar he is, but this audio tape will be more convincing than the DNA was to the star-struck imbeciles who let him off for double homicide.

I'm sure those people in that hotel room thought they were going to die. A murderer barges in screaming with thugs and guns and lines them up against a wall? No wonder that one guy had a heart attack. I'm sure they thought it was their last day on earth.

rot in prison then in hell, simpson. Both are too good for you. Savage throwback. Maybe he can get some schooling finally and learn to speak proper English instead of screaming things like, "Don't let nobody leave!" and "sh-t" and "mo----f-----r." Oh, yea, simpson, you're a real class act.