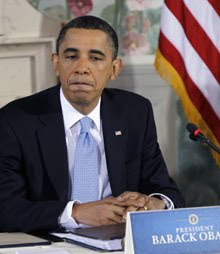 For an incredible, unprecedented six hours Thursday President Obama presided over a much ballyhooed health-care forum with Republican rivals who have as much intention of helping him pass his reform bill as I have of slicing off my own lips with a box-cutter. So why the effort then? Because for some apparently deeply-psychologically-rooted reason, Obama and the Democrats are on an embarrassing, futile quest for bi-partisanship that's starting to make them look about as emotionally needy as an insecure 5-year-old relentlessly seeking parental adulation and approval. But with Republicans, it's never going to come. Ever. Period. The only thing they are going to help him do is fail. So to the president and Democratic leaders I have three words: stop...kissing...ass. Just drop the nuclear option--reconciliation--on 'em and get this damned health-care bill passed already. Enough's enough.

Reconciliation is a parliamentary tactic which in essence allows the majority party to pass certain legislation--that which impacts the federal budget--with just 51 Senate votes instead of the filibuster-proof 60. With Democrats in control and threatening to use this weapon to ultimately pass reform, Republicans are outraged and crying foul. Yet 16 of the 22 bills passed this way since its adoption in 1974 came under Republican majorities, including former President Bush's tax cuts. Reconciliation is so popular among Republicans that New Hampshire Sen. Judd Gregg said in 2005, "Is there something wrong with 'majority rules'? I don't think so." He was referring to his support of the GOP using reconciliation to pass legislation allowing drilling in Alaska's Arctic Wildlife Refuge.

But Sen. Gregg now sings a different tune over health-care reform: "The purpose of the Senate on something this complex and this comprehensive is to be a place where you have debate and you have amendments. And if you have a decent bill you shouldn’t fear them." Sorry pal, can't have it both ways. If reconciliation was acceptable under Republican majorities, then so shall it be under Harry Reid's Democratic Senate. Can you say, colossal hypocrite?

Obama needs to stop pussyfooting around with The Party of No. He needs to stop seeking the Republicans' approval on everything he campaigned on and believes in. He needs to stop wasting precious time trying to convince the unconvincable that they should partner with him on his historic health-care legislation. He needs to grow some balls, quite frankly, and just get the job done, one way or another.


On another note, we could use your help at The The Adrienne Shelly Foundation. We're a 501 c 3 tax-exempt, non-profit organization dedicated in my late wife's honor, and with a simple mission: supporting women filmmakers. Adrienne, who wrote, directed and starred in the hit film WAITRESS, was killed November 1, 2006. Through the Foundation, her commitment to filmmaking lives on. We've established scholarships, grants, finishing funds, screenwriting fellowships and living stipends at NYU's Tisch School of the Arts/Kanbar Institute of Film; Columbia University; American Film Institute; Women in Film; IFP; the Nantucket Film Festival; the Tribeca Film Institute; and the Sundance Institute. Your generous contribution will go a long way towards helping us achieve this very important mission. Please click here to make a donation. Thank you.
Posted by The Ostroy Report at 7:48 AM

If they would pass it with a Public Option, their poll numbers would rise. They would be in a better position in November.

More important they will have done the moral thing for the American people. They would go down in history as standing up for us.
They must do this.

The problem here is that no one is willing to work together on BOTH sides of the aisle.

Yesterday's show was silly. It is clear that no one was going to change their position.

Disappointingly, Obama was disingenuous. He knows what the Republicans want - they want real tort reform to limit junk lawsuits, they want the ability to buy health insurance across state lines like just about any other type of insurance can be purchased.

Yet Obama has no intention of giving an inch on either of those things. So, he's really not looking for bi-partisan cooperation. His idea of bi-partisanship is picking off people like Olympia Snow or Susan Collins.

The Republicans similarly have no intention of working with Obama. Their constant repetition of ripping things up and starting from scratch makes that much clear.

The way to get this done would have been to have STARTED this as an open process, with both sides contributing. Sadly, Obama outsourced it to the radicals in his caucus who promptly violated his promise to make the process collaborative and open. It was neither.

Please stop pretending that you don't know what is going on.

You know damn well that K Street lobbyists working for the health insurance industry are paying off many Democrats. They in turn are using the filibuster rule as a convenient excuse for not allowing a credible HCR bill to get passed.

Another web site opined that Obama has been playing the bipartisan card because he's afraid of the the feedback coming from the Republicans if he doesn't. This is not a sign of a leader.

Now, a year late and trillions short, Obama wants to be the president. If Obama had any courage, health care reform (and not a health insurance mandate) would have been passed by last summer, a jobs bill would have long since gone through, new regulation of Wall Street would be on the books, and the environment would now be the topic of discussion. Instead, we got a fully wasted year which allowed the GOP to rebuild after their disastrous showing in November 2008.

I don't know for sure how things are going to go this fall, but I suspect that Obama has just about shot his wad. He's done little to retain the loyalty of the independent voter, and Wall Street has cut off the Democrats from the largess of their open bailout bonus purses. That have instead turned to the Republicans, holding out millions of the tax payers dollars toward them as if to say "what will YOU do for us now that the Dems have crossed with with threats of regulation?". With such bolstering, there is little doubt that the GOP will ruthlessly take advantage of these renewed strengths and clean Obama's clock. He will then spend the next two years kissing GOP ass just to keep them from impeaching him.