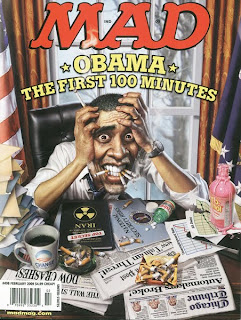 President Obama last Sunday had his first medical exam since becoming commander-in-Chief. The results? He's in great physical shape, albeit for high cholesterol and a continuing nicotine addiction. The president wants to quit smoking, but he simply can't.

Last June, Obama called himself a "former smoker" who occasionally "slips up" and has a cigarette. And on Monday Press Secretary Robert Gibbs admitted Obama "occasionally falls of the wagon when it comes to that," but added that the president "continues to chew nicotine gum."

I find the president's failure to quit smoking fascinating. Obama's a man who's seemingly been able to accomplish in life everything he's wanted, demonstrating unwavering discipline, resolve and ambition. Born of mixed race parents who divorced when he was young, Obama's defied the massive odds against him to become America's first black president. He was the first black president of the Harvard Law Review. He became a U.S. Senator at age 43 and almost immediately began campaigning for the most powerful job in the world. This is a guy who looks adversity in the face and says, bring it on. Someone who says, I can instead of I can't. So why the heck does he find it so hard to quit smoking?

Truth be told, I will never be president. I'm just not smart enough, and I lack the temperament and self-control needed. I would've called John McCain a dick in the opening minutes of the very first debate. Or when Republican Congressman Joe Wilson yelled "You're a liar!" at Obama during his health-care address to Congress last year, instead of mentaly counting to five and then responding with a sheepish "Not true" as the prez did, I'd have grabbed my nuts and yelled "Lie this, asshole!" But, I did quite smoking 18 years ago, and cold turkey no less. So why can't Obama, a guy who seemingly can do anything he sets his mind to?

The answer is simple: cigarettes are the glue that keeps Obama sane. It's his one major vice. It's how Mr. Cool-as-a-Cucumber keeps from losing it. When Obama lights up a butt, it's not just smoke that gets filtered, but an ungodly amount of negativity and stress heaped on him from two wars, a near economic depression, the burden of health care reform and the looming November midterms, where his far-reaching coattails will likely carry his party to success or failure at the polls. So when he exhales that smoke, he's also exhaling the monumental pressures of the job. Honestly, I think without smoking, this guy cracks.

If you dont think he hits the bong either, youre crazy.

If he's mixed-race, how is he black?

It took me 3 times to quit smoking cigarettes. It was one of the hardest things I ever did. I did it cold turkey too.

Obama should smoke the herb to relax. It is much better than cigs.

If he can't do it himself, Obama has at least helped my friend to stop smoking. My friend is unable to get a job and so can't afford cigarettes and the tax on them. Thank you, Mr. President, he says. My friend is suffering severe stres, however, without his cigarettes.

If Dubya Bush didn't prove the fallacy that one needs to be smart to be president, what does?

The only speedy antidote to anger is nicotine. I'm not surprised at his failure.
XO
WWW