SpitGate: It Was Just Projectile Drool, I Swear! 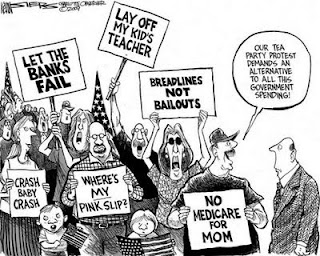 As the controversial healthcare reform bill was being debated in Washington two Sundays ago, Rep. Emanuel Cleaver, a black Democrat from Missouri, claims he was spit on outside the Capitol by an enraged white Tea Party protester. The accusation has sparked heated passions on both sides, with Democrats condemning the vile behavior while Republicans uniformly accuse Cleaver of lying. Right wing talking heads Sean Hannity and others have spent hours of radio and TV time mitigating the circumstances and denying the despicable act occurred. Tea Party groups have even offered cash rewards for evidence of said spitting. One conservative lightweight, Sirius Satellite Radio's Andrew Wilkow, arrogantly barked "This did not happen," as if he was there and witnessed the whole thing, and claimed it was more of a "say it don't spray it" fluke in which a "spit-like" fluid came out of the angry, screaming protester's mouth as the Congressman passed him on the Capitol steps. Yes, my Republican friends, this is nothing more than projectile drool, right?

Well, below is new video of the alleged spitting. I admit, it's pretty hard to tell if the enraged Tea Bagger intentionally spit on the Congressman. But some highly suspect circumstantial evidence clearly exists: (1) Cleaver obviously is either a great physical actor or some "spit-like" fluid definitely hit him in the face as he passed the protester, causing his entire body to jerk away from the accused; (2) the angry, visceral reaction from Cleaver to the protester clearly signals that something very bad had just happened. Something beyond simple partisan, anti-reform shouting; (3) notice how the protester's hands are strategically cupped over his mouth, which would conveniently conceal the act of spitting. Keep in mind that both men at this point are perhaps two feet away from each other, which would mean the rabid protester's vein-popping shouting at Cleaver would easily be heard sans hand-cupping, and that such distance might also make the "spray it" theory a bit of a stretch; (4) After he passes, Cleaver begins to wipe something off his face in disgust. Again, great acting?

Maybe, just maybe, this cretin actually did spit on Cleaver. And to be sure, he clearly did something highly offensive to the Congressman. Why can't Republicans then, out of simple human decency, just acknowledge and condemn this unacceptable behavior? They can't. It's not in their DNA. The vitriolic response from the right over SpitGate is therefore no surprise. The rush to unequivocally deny the occurrence, while simultaneously attacking Cleaver's credibility, reputation and motives, is despicable and shameful.
Posted by The Ostroy Report at 7:06 AM

This is what happens when the repubs have media control. They are masters at it. This was all part of their take over plan:
Control the media, control the government, control the courts, control education (ala Texas book company monopoly). The repubs have a huge media machine. They control 95% of the talk radio stations. The Dems need to take a look at this big time. How else do so many folks sound so stupid and ignorant?

The New York Times is widely regarded as setting the media template for the mainstream media. Check it out for yourself - read the paper in the AM, then watch the morning and evening news. Then check the websites of the "flyover" country newspapers.

Hardly a Republican control of the media.

Even with Fox having enormous viewership leads over it's cable competitors, it still pales in viewership to MSM over the air networks.

When you have guys like Stephanopoulous, Matthews (he has his NBC show), the late Russert (who worked for Cuomo and Moynihan) - all guys who were high level paid Democratic political operatives having high profile network positions, when you have a media that is composed of self identified Democratic voters by the order of 7 or 8 to 1, it's hard to say that the Republicans control the media.

And as to riots, what about Code Pink? What about all of those wing nuts who go crazy every time Ann Coulter shows up. I don't like hardly a word she says, but no one ever riots when, say wing nuts like Bill Maher gives campus speeches.

It is a fact that liberals cause disturbances, who actually engage in violence - just about every assassination and/or assassination attempt against a US president was done by leftists.

Look at what Code Pink did to Rove today. No one can justify that. And yet, Code Pinkerers were given tickets to congressional hearings when the GOP controlled Congress with the full expectation that they would do their typical disruption number.

They are the guys who constantly march in the streets with their "hey hey ho ho fill in the blank has got to go". They are the ones who fight to bar speech with physical acts as well as extreme verbal behavior, as they flock to attend guys like Iran's premier when they are invited to speak at places like Columbia U.

Say what you will, but this clip is nonsense as is the entire issue. You can't do what the Democratic party did without having people react. And they have been more or less peaceful about it even if an ocassional person yells out a bad word.

If the bad word of a single person can smear an entire group, then the Democrats hate Jews (see, Al Sharpton and Jesse Jackson). Now that's silly.

You've hit a nerve, Andy, if some RNC media control spinmeister has to show up anonymously (@ 1:52 PM) and attempt to deflect the blame away from the fascists who want to corporatize our government and toward those who want to conserve our freedoms and liberties. Tim Russert as a Democratic operative??? Please.

But to get back on the topic at hand, all we can go on is the reaction of the Congressman. I can't see clearly one way or the other what happened, as the probable expectorator had his hands up to his face. (about 0:18 of the video) when the reaction occurs. But what happens at about 1:24 to 1:54 of the video doesn't fill me with a lot of confidence in the Congressman's cognition. Clearly, something happened. But how does it make Cleaver look when he's standing with a member of the security force right in front of the alleged assailant and doesn't seem to recognize him? Then walks back up the stairs in a resigned manner having done nothing? He looks powerless.

I initially felt that the Congressman handled the assault with the sort of dignity that the original Freedom Marchers displayed when they suffered insult. But to act indecisively as he did afterward hurts his image. Either turn the other cheek and ignore the buffoon, or impose the consequence of the action upon the assailant. Either would have enhanced the respect due the Congressman. To stop in mid-stream and reverse his course of action will only encourage some other Tea Bagger idiot to do something similar to someone else.