What the Health Care Vote Says About the Parties 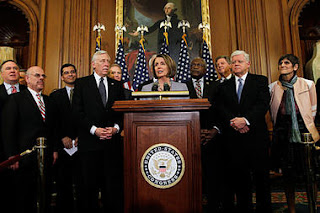 Let's face it, what the health care reform bill vote really boils down to is this: Democrats want to help people, Republicans only care about their personal wealth and keeping their taxes low. There's no other way to explain a 100% partisan vote on the historic legislation that passed in the House Sunday night.

I'll take it even an ugly step further: it's about racism. Bigotry. Anger over welfare, which is precisely how the anti-reformists and tea baggers see the measure. It's all about ignorant middle-class whites frothing at the mouth over the belief that they'll have to pay for someone else's coverage...in particular poor minorities.

It was horrifying to witness these protesting tea bag cretins spitting at and hurling vile racial and anti-gay slurs at Reps. Barney Frank (MA), Andre Carson (IN) and John Lewis (GA) as they entered "the people's House" to cast their votes. Carson reported hearing the N-word fifteen times. How surreal it must've been for Lewis who, forty-five years ago, was beaten and bloodied as he marched for civil rights. And while prominent Republicans like House Minority Leader John Boehner (OH) condemned Sunday's behavior as "reprehensible," it's been precisely their propaganda and incendiary rhetoric that's fueled the "grass roots" vitriol for the past year.

The healthcare debate is a lesson in fear-mongering. Chock full of GOP scare tactics from death panels to government takeovers and socialized medicine. I'm still waiting for one of these shameless distortionists to explain how handing 32-million new customers to private insurance companies constitutes socialized medicine, or a government takeover of anything. In fact, a convincing argument could be made that the health care bill is actually pro-business. Those who stand to gain the most are the insurance companies, the pharmaceuticals, hospitals and doctors. Not exactly what you'd call a Marxist revolution.

In the wake of defeat, Boehner and Company are whining over other objections as well. They say the bill defies public opinion, and that President Obama and Democrats are arrogantly and unilaterally deciding what's best for America. But these are the same pols who cheered and rallied when former president George W. Bush proudly boasted that he governs with his conscience and not according to public opinion polls.

The Boehner crowd also decries the parliamentary tactic known as budget reconciliation, where just 50 votes instead of the filibuster-proof 60 is needed, and how the healthcare bill will pass in the Senate this week. But it's been Republican majorities who've pushed through 16 of the 22 bills that have passed under this process. I guess reconciliation's a bitch when it's not your party doing the bomb-dropping.

There are other arguments as well, such as how the bill will lead to skyrocketing costs and massive debt. But the non-partisan Congressional Budget Office analysis made public last week concluded that the measure will actually reduce the deficit by $143-billion over 10 years. But why let facts spoil GOP opinion, right?

Look, we already have Medicare, Medicaid and government-funded health insurance for veterans. We also have government-mandated auto insurance. So there's nothing terribly ground-breaking or radical here. Which is why all the drivel about socialism and radicalism is equal parts despicable and laughable.

The message from Sunday night's vote is quite simple, and it should be aggressively and relentlessly pounded into Americans' heads at every possible turn by Obama and the party as it moves closer to November's election: "The Democratic Party once again is the party that cares about you, your children, your elderly parents, your health, your education and your overall welfare. Which is why it took 219 of us, without one single vote from Republicans, to ensure that you will never ever again have to worry about not having health insurance or being denied coverage. Americans owe Democrats a big Thank You." That's right, a big thank you. Obama and the Democrats must proudly take 100% credit for this historic piece of legislation and run with it all the way to the midterms. Let the GOP run on repealing it, as Boehner threatens. Let's see where that gets 'em.

Representing his sore-losing, crybaby party, Boehner Sunday night lamented, "The American people are angry. This body moves forward against their will. Shame on us." He's right. He and his party should be utterly ashamed of themselves for being a bunch of lying, deceiving, self-serving elitists who don't give a shit about anything but their pocketbooks. That's right John, shame on you.
Posted by The Ostroy Report at 7:16 AM

I do thank them humbly, and from the bottom of my heart. Not for me or my family (we are all covered thank God...) but for everyone else who gets to benefit out of this measure. And for removing the shame of letting 45,000 people die annually because they have no money.
Health coverage is a basic human right folks... what kind of perverted mentality has turned it into a privilege?

It should not come as a surprise that these hypocrites (i.e., Repuglicans) always raise the beacon of sacrifice and patriotism when speaking about war and death (our war, but "their" -- i.e., the soldiers' deaths), but are unwilling to sacrifice anything for the common good. Scavenging, greedy, self-centered hypocrites, these vermin think only of themselves and care only for their pocketbook.

I wonder not only what it says about the Republican Party, but what does it say about the people who support them? Watching the hateful, homophob, racist tea baggers screaming such disgusting words at our duly elected representatives was so embarrassing for the world to see. They sure look like they are in need of healthcare.
The Repubs encourage them until they say or put such things on their signs that are so out of it and then they act surprised and distance themselves.
Americans are not buying it.
No matter what happens next November, the Dems have history on their side. The Repubs are so out of it I keep thinking they are going to implode. They were on total insanity display last night.

From what I've been reading, Canada had a similar bill which then led to universal health care. Wouldn't it be too funny if all the lawsuits about it, led to Medicare for all?

Now if only the top federal tax bracket be raised from 38% back to pre 1964 level of 80% or better. The burden of school funding has to shift back to federal income taxes from local state property taxes so the inequity of poor districts and rich districts are equalized, andd real tax reform is possible.
Tax the rich.

I wish I could share in the celebration. Unfortunately, I have not forgotten how I have been sold to the insurance companies for the purpose of enhancing their bottom line. In addition to this involuntary servitude, I -being the employee beneficiary of a Cadillac plan- will get to pay additional taxes for this union contract "privilege".

Without serious modification and enhancement of the proper sort, this alleged victory is meaningless. The Congress is reported to be working on such changes, but I have yet to hear much about the specifics. I've been too busy with my personal health care issues to have time to perform the necessary research to understand this modification prospect better. I will do so as soon as that is possible. But without any meaningful restraints upon the ability of the insurance companies to raise rates and deny coverage, and a repeal of their antitrust exemption, all the hoopla is for naught. Without meaningful repairs, the Democrats will be in serious difficulties. See the mess Nikolas Sarkozy is in right now due to his pissing off the French voters if you doubt me.

I now hope for the best while expecting -with far too much much justification- the worst.

Jeanne C turned me onto your blog. Thank you for the welcome distraction from all non-sense in the media. Your article was well written and I totally agree with your analysis of the situation. In a lot of ways this should have been a Republican bill. The reality is everyone is paying for the uninsured already…

They would be more than willing to spend an extra few trillion, to liberate Iran from its oil.

Wow, Andy were you eavesdropping on me and my husband while we were getting ready this morning?? I promise you that this is what we said verbatim:) After reading a piece this morning about a right wing blogger telling their zombie followers to go break the windows of local democrats offices of course my first thought was krystalnacht anyone, and then what have these cynical republicans created??? The proverbial green jeanie is out of the bottle and this kind of hideous behavior only grows like a malignant tumor. I thought when will decency be a wake up call for republicans and then I realized that would be never; as there is no monetary profit on common decency and rational debate....

I have read and it seems very informative for me, Thanks for share..