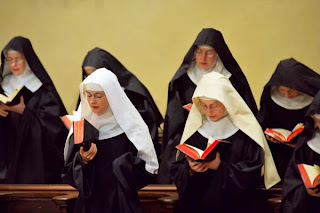 A coalition of Catholic nuns took a very brave stand this week by defying church hierarchy in support of the Senate's healthcare reform bill. In a letter to Congress, the leaders of more than fifty Catholic women's orders and organizations, including the Leadership Conference of Women Religious, which represents over 53,000 American Catholic nuns, urged lawmakers to pass the measure.

The bill is opposed by the U.S. Conference of Catholic Bishops, conservatives, and the Congressional Republican minority, mainly over whether government-funded/subsidized insurance policies should cover abortions.

In supporting the bill, the nuns have taken the controversial abortion issue, the subject of intense and often violent debate since 1973's Supreme Court passage of Roe v Wade, and are using the Catholic Church's "pro-life" stance as the very same justification for passage of healthcare reform.

But here's the truly incredible, groundbreaking part of Campbell's comments: "For us, first of all, tens of thousands of people are dying each year because they don't have access to healthcare, so that is a life issue."

Finally, a logical, practical interpretation from some in the religious community of what it truly means to be "pro-life." Kudos to Sister Campbell and the 53,000+ other nuns for focusing on the millions of uninsured Americans, and those who die each year as result of poor or no healthcare, and for considering what their lives are worth.
Posted by The Ostroy Report at 7:37 AM

We will now see just how little power Pope Ratz has. He's vulnerable over the latest pedophile priest scandal, and may not be able to force the nuns to submit to his authority like every other predecessor prelate has done when the nuns forgot their vow of obedience.

For once, I root for the nuns.

Let's hope that the Dems and President Obama get out starting today to sell the good in HCR. From what I have read in the past, this is how Canada eventually went on to get national health care coverage for all Canadians. Let's hope that down the road a public option will be voted in so folks can buy into it.

The nuns made me sooooooo proud!That's what religion is all about!