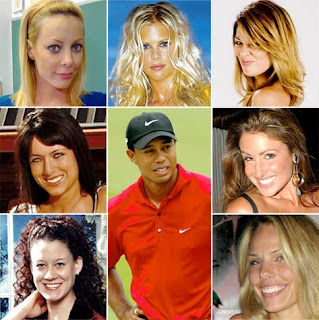 Isn't America great!? It's truly the land of Evelyn Wood-style public relations rehabilitation. In announcing his April 8th return to the Masters tournament Tuesday, golf legend Tiger Woods proved once again that, when it comes to money over morality, it's all about the Benjamin's, and always will be.

Americans have short memories, and debauching celebrities and politicians are all too happy to give the public what it wants. The scandal pages are littered with famous folk who've done the crime and seemingly not paid much time. Pervy back-biting sodomizing NBA announcer Marv Albert was "fired" by NBC yet back less than two years later. Uber-hypocrite slut-hound Eliot Spitzer, New York's former attorney general, returned to the spotlight after a two year absence and is now a broadcast political analyst and bizarre defender of hooker-cheating vs. cheating-cheating. And Woods' extramarital Olympics has taken infidelity to a whole new dimension. Yet, here he is, back after a measly four month self-imposed exile, ready for Main Street and Madison Avenue to fall in love all over again. What's next, John Edwards running for Congress this Summer?

I'm no PR guru, but it's become painfully clear that a high-profile fall-from-grace needs only to follow a very simple road to redemption: issue a quick website-based public acknowledgement of the scandal and ask for privacy for your family; stage a dramatic and controlled press conference a few weeks later to offer up your half-hearted mea culpa; spend a few weeks in rehab; tease the media-whores about a possible return; and then a few weeks later announce said return. Yes, Virginia, it's that easy.

So let's just stop all the dramatic death-knelling every time one of our beloved heroes is literally caught with his proverbial pants down. They'll come back. They always come back. Just ask the crack-smokin, hoe-bangin' Mr. 3-Hour-Motel-Room-Special himself, Marion Barry.
Posted by The Ostroy Report at 8:09 PM

I don't really care about Tiger Woods. Sports figures can pretty much do what they want.

Now Health Care Reform, I care very much about.

Pass it & Change it!

Was there any good reason to go here, Andy? As long as Tiger Woods remains the top story in the news, we won't hear -from among a huge list of vital reporting topics- very much about how Obama is protecting Bush administration war criminals from receiving justice. We also won't get to know about Obama's promoting the passage of John McCain and Joe Lieberman's bill to introduce legalized totalitarianism which could be used to revoke your citizenship, ship you off to some foreign hellhole for a little physical "therapy", and leave you there to rot until the end of your days.

But we'd rather hear about Tiger's performance issues, right?

Why should Tiger Woods not enjoy the same PR benefits as, for example, a Republican pol who went "hikeing the Appalachian Trail"...in Argentina and refuses to resign; or a Republican Senator who is embroiled in paying off his mistress's husband with a lucratave lobbying job that benefits the senator; or how about ex-representative Tom Delay (R)? He's not in jail, but dancing on TV. There's not enough room here to name more names, but I'm sure they will come to you. Why are you ragging on Tiger Woods, who is no different that our illustreous Republican pols, and HE didn't even break the law...just made some very bad decisions!