If Democrats Were Republican 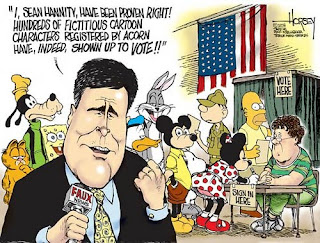 Bi-partisanship. In the current political climate, it's but a mere fantasy. While President Obama and the Democrats seemingly want it, Republicans would rather choke on their own vomit than support anything brought into the Beltway on a Donkey. Fortunately, the left controls much of the power these days, but if it took a page out of the GOP playbook, it might throw down a much tighter, more effective offense. In an age where fight fire with fire is needed more than ever, Democrats typically take the higher road.

The simple truth is, when Republican politicians want to get something done--be it pass or prevent legislation, defeat opposition candidates, or wage war--they march in lockstep down Pennsylvania Avenue, doing everything in their power to succeed including exaggerate, deceive, cheat, lie and character assassinate.

Republicans are masterful at labeling, framing debates, and creating catch phrases and crafty soundbytes that are quite effective and stick with voters. Some of their greatest hits: birthers, truthers, "death panels," cries of "socialism," "radical agendas," "healthcare rationing," "government takeovers," "Armageddon," "aiding the terrorists," WMD and "mushroom clouds."

The recent highly contentious battle over the health care bill is a prime example of this main difference between Republicans and Democrats. They've somehow convinced a majority of voters that the bill will force them to give up their preferred healthcare provider, switch doctors, pay more, kill Granny and have Obama dictate which procedures they can have. Of course, this is all pure, unadulterated GOP bullshit, but it works.

So I have an idea for Obama and the Dems as they embark on financial reform, the next mission on the progressive/liberal agenda: How about ramming home the following talking points:?

-"If financial reform fails, Republicans will succeed in doing away with the FDIC, and your savings will lose this guaranteed protection."

-"We need financial reform because Republicans want to allow Wall Street executives to put your bank savings into high-risk investments and you could lose your life savings."

-"Republicans allowed Wall Street executives to steal from the government and are now paying themselves big fat bonuses with YOUR money."

-"While you're struggling to make ends meet, or may even be out of work, Republicans and their fatcat Wall Street pals are making more money than ever...off of YOUR back."

-"Republicans want to allow banks to raise credit card interest rates to 30% if you're late with one payment."

-"Republicans want to raise the minimum down-payment on home purchases to 30% or higher."

-"Small businesses will suffer if Republicans have their way and allow banks to restrict credit lines to only the largest corporations."


On another note, we could use your help at The The Adrienne Shelly Foundation. We're a 501 c 3 tax-exempt, non-profit organization dedicated in my late wife's honor, and with a simple mission: supporting women filmmakers. Adrienne, who wrote, directed and starred in the hit film WAITRESS, was killed November 1, 2006. Through the Foundation, her commitment to filmmaking lives on. We've established scholarships, grants, finishing funds, screenwriting fellowships and living stipends at NYU's Tisch School of the Arts/Kanbar Institute of Film; Columbia University; American Film Institute; Women in Film; IFP; the Nantucket Film Festival; the Tribeca Film Institute; and the Sundance Institute. Your generous contribution will go a long way towards helping us achieve this very important mission. Please click here to make a donation. Thank you.
Posted by The Ostroy Report at 10:06 PM

The Repubs have a master message organization with Fox Lies and 95% of the talk radio stations. Isn't it time we do something about the radio air waves? This is a huge part of the Dems problems. They are shut out in many markets across the country.

The high road. Nice, diplomatic way of putting it. Myself, I prefer the word "spineless."

I agree with your points to the Republicans, but you cannot leave out the blame of the Democrats. They didn't insist on any governmental oversight of the Wall Street banks to prevent those outrageous bonuses. They allowed the credit card "reform" which allows those 30% interest rates to pass with barely a whimper. They pushed through new mortgage regulations without any leverage to see to it that the banks acted honestly and in a timely manner. They have done almost nothing to aid the unemployed. China is eating our Green Revolution lunch. Etc, Etc. Etc.

Had Obama taken up this aggressive stance at this time last year, this would be a very different nation right now. He would likely have surpassed FDR's Hundred Days. But stifling the Republicans as he is now willing to do strikes me only as a strategic desperation move intended to keep the Wall Street donations bearing "DNC" on the envelope instead of "RNC". It's a year too late, and $24 trillion too short.

Let's be clear. The current health care bill is constructed to deny most Americans their free choice of health care providers. It is a very artful scheme, crafted in a way that provides deniability. But it is there and clearly so.

The heart of the scheme is the requirement that health insurance providers will be required to pay out 85% of the premiums they take in as claims to policy holders.

Anyone in the insurance business - and I was for several years - knows that 15% for claims administration, overhead such as rent, the paper that policies are printed on, and the wages of those who run a company is clearly inadequate.

No company would be able to survive on 15% of their gross revenue for costs - and it's not even close. State insurance commissioners will quickly come to see that these institutions are or will be financially unsound and they will not be able to stay in the business and Americans will be denied their current health care provider.

That is only one way that the program is crafted to intentionally deny Americans their choice of providers.

The second way is that the penalty for not provided coverage was purposely set way too low. Employers will purposely pay the fine, which is far cheaper than it would cost to provide the coverage. And then the American worker will lose his existing health care provider.

What will happen is all these government run exchanges will own the business - or, they will be replaced with a single payer system.

Many people will cheer for that, and I'm not commenting on it one way or another.

But it's fair to say that the bill Obama signed is crafted in such a way as to, over time, and not necessarily a short time, deny people their ability to keep their existing coverage in favor of government controlled options.