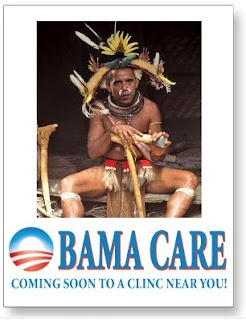 Can it really be that health care reform in and of itself is the true cause of the massive vitriolic rage spewing from conservatives today? Is the Tea Party movement really about runaway government spending? Have the chilling faces of hate seen at protests across America truly been about a public option? If you ask me, it has way more to do with an ugly truth that few are willing to acknowledge: it's about a bunch of angry, bigoted white racists who see reform as little more than a black president doling out more welfare to other blacks and minorities (as the photo above, which is all over the 'net, suggests).

It's shocking to me to witness this rage over health care reform when not a peep's been uttered by these right-wing loons for the past seven years over an unjust war in Iraq that's killed thousands of U.S. soldiers, wounded and maimed tens of thousands of others, and squandered nearly a trillion dollars. Health care reform is what's heatedly brought these heretofore silent Americans into the political ring? I'm not buyin' it, sorry. Once again, racism is rearing its ugly head. Have you seen these protesters? The things they do and say? Shouting racial epithets and anti-gay slurs, and spitting at lawmakers. So angry that blood vessels are popping in their necks. Faces contorted in hatred. Screaming like animals and calling for the deaths of elected Democrats. All over health care? Really? Have we become so politically correct as a nation as to be so afraid to call this shameful behavior exactly what it is? Not me. This blatant racism makes me sick, and I'm not afraid to call it out.

The grass roots bigotry mobs first surfaced during the 2008 presidential campaign, and included the birthers/truthers (denying President Obama's citizenship) and those who attacked him and Michelle on every conceivable despicable level. The post-election movement picked up steam during last Summer's Town Hall meetings where the flames of intense anger and hatred were recklessly stoked. Almost one year and the passage of the reform bill later, and things have sadly and shamefully gotten much worse.

Former Alaska Governor and GOP presidential running-mate Sarah Palin has become perhaps the biggest perpetrator of rabble-rousing hate-speak more than anyone save for media blowhard Rush Limbaugh. She started this campaign during the election when she relentlessly incited her ignorant lemming base with claims that Obama was a radical socialist who palled around with terrorists. This week she announced her "target list" of vulnerable Democrats, marking a U.S. map with reprehensible rifle-scope bulls eyes of the districts she believes are in play. "Don't retreat, re-load," she urges. Is she speaking in code to the psychos who showed up at Obama rallies last year with rifles and machine guns?

This ruthless campaign of disrespect and hate continued and built momentum last fall when Rep. Joe Wilson (SC) barked "You lie" during Obama's address to Congress when he assured that the health care bill would not cover illegal aliens.

More recently, in the House Chamber during last week's health care debate, Texas Rep. Randy Neugebauer shouted "baby killer" as Michigan Rep. Bart Stupak, who reversed his vote on the measure after receiving a compromise over the controversial abortion-funding issue, took the podium.

This week alone, in the wake of the reform bill's passage, there've been numerous verbal attacks, acts of vandalism and death threats aimed at Democrats. A caller to Stupak's office left this outrageously offensive message in the lawmaker's office:

A female caller left this voicemail on Arizona Rep. Harry Mitchell's machine: "Hi Mr. Mitchell. For the rest of your life, with the vote that you cast, you are going to have to look over your shoulder for as long as you live in this district. You are always going to have to look over your fucking shoulder because people in your district hate your fucking face. And don't you forget it. You have riled up peoples' rage. We are filled with rage and hate, today, towards you, hate like we have never, ever felt. I love my insurance company, and to have you come in between me and my fucking doctor. I cannot tell you how much I wish a panty bomber would come, would come in and just blow your fucking place up." Listen to her venomous rage. It'd perhaps be 1/10th understandable if she had a fucking clue what the hell she was talking about, which makes these attacks even more infuriating and shocking.

And what does ubiquitous House Minority Whip Eric Cantor (VA) have to say about these despicable acts waged against the opposition? "It is reckless to use these incidents as media vehicles for political gain....By ratcheting up the rhetoric, some will only inflame these situations to dangerous levels." So let's get this straight: Cantor's chosen to condemn what he believes is the left's exploitation of these heinous acts, not the actual acts themselves. Talk about posturing for political gain.

Adding insult to injury, Fox's resident wackjob Glen Beck accused Nancy Pelosi and other Democrats of trying to get themselves killed for political expediency's sake: "I can guarantee you they walked out and said...what the hell do you have to do to these people to get them to kill us?"

Jeez Louise, what the hell is wrong with these people? Have they all gone mad? It's become abundantly clear that the Republican Party has been utterly hijacked by its far, far, far right-wing fringe lunatic faction. And the only notable voice of reason on the right to highlight this dangerous, suicidal behavior is former George W. Bush speechwriter David Frum, who was fired Thursday from conservative think tank American Enterprise Institute a day after he had the balls to criticize his own party in an op-ed piece for CNN: "We went the radical way looking for Waterloo and it looks like we arrived at Waterloo." There's obviously no room in the party for voices of reason.

When will the madness stop, when the incendiary rhetoric and violent metaphors turn to actual horrific violence? Before the unthinkable occurs, the leaders of the Republican Party--Cantor, Rep. John Boehner, Sen. Mitch McConnell, RNC Chair Michael Steele, etc--have a moral obligation and civic duty to put an end to the hate speak flame-fanning amongst the electorate and within its own ranks. Enough's enough.


On another note, we could use your help at The The Adrienne Shelly Foundation. We're a 501 c 3 tax-exempt, non-profit organization dedicated in my late wife's honor, and with a simple mission: supporting women filmmakers. Adrienne, who wrote, directed and starred in the hit film WAITRESS, was killed November 1, 2006. Through the Foundation, her commitment to filmmaking lives on. We've established scholarships, grants, finishing funds, screenwriting fellowships and living stipends at NYU's Tisch School of the Arts/Kanbar Institute of Film; Columbia University; American Film Institute; Women in Film; IFP; the Nantucket Film Festival; the Tribeca Film Institute; and the Sundance Institute. Your generous contribution will go a long way towards helping us achieve this very important mission. Please click here to make a donation. Thank you.
Posted by The Ostroy Report at 7:09 AM

We've tried to ignore it going back to before the election, but it is so out in the open now. This has more to do with RACISM and how our country is now more diverse than anything else.

I sure hope the Feds are on top of all this as pockets of armed folks join together all over the country. I was told by an extreme right winger in Tennessee, that this is about a revolution and that our US military will join them!

Wake up folks. If they get their way and the Feds don't clamp it down before it gets out of hand, we are in for a second Civil War.

Vote in November so they don't gain many seats. That's our only hope.

The GOP party plank for '10? "...wide-eyed hate and vitriol is no vice in the face of defending the rights of the insurance companies..."

I wonder why the Tea party can't seem to consider zeroing in on the government-provided health insurance for veterans as a particular target for them venom.

If the GOP's lawsuits against health insurance reform succeed as well as their lawsuit against election funding controls, then a sweeping away of all government heath insurance - including veterans, for the elderly, and handicapped - must logically follow.

Wouldn't that be an interested placard for a tri-corner and breeches wearing Tea partier?

Thanks, as always Andy for putting my thoughts into words. You are the MAN.This is the subject a few but Chris Mathews has dared mention.

"It's shocking to me to witness this rage over health care reform when not a peep's been uttered by these right-wing loons for the past seven years over an unjust war in Iraq..."

Allow me to expand. War Abroad Is Peace At Home. Send them over there to fight so that we don't have to fight them over here!

War is where one send those uppity blacks and browns and poor whites who don't know their place in a wealthy white supremacist society - and a poor white is anyone who makes less then you do. The fear of becoming one of those poor whites who are eligible only for membership in the Cannon Fodder Society is the target of Republican fear-mongering.

The shame of it all is that the nefarious scheme is working very well despite all of the economic reasons forcing these people themselves to take up military slavery as the means of survival.

No matter what anyone says, the righties own the media. They are such masters of slogans. For 30 years we have heard how the mainstream media is liberal. All you have to do is watch the nightly news to see that this isn't true. The tea baggers get way more attention than they deserve. And if we who lean left do not get out and vote like we did in 2008, it really will be over. The white haters will have won. I am white, but I find the repubs and tea baggers a total embarrassment.