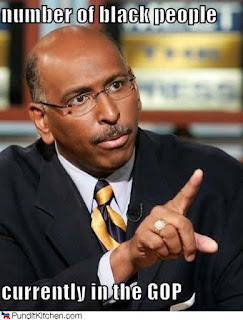 I'm willing to bet my life's savings that, back in 2008 when Michael Steele was elected head of the RNC, many people on both sides of the aisle were as incredulous as I in seeing a black man leading this almost entirely white political party. A party that seemingly cares about the struggles and needs of blacks and other minorities about as much as Saddam did Shiites.

At the time, it was painfully clear that Republican officials focused not on Steele's qualifications and overall merit in putting him in charge, but rather their sense of urgency and political expediency in having a black face of the party as they battled fiercely with the Democrats and then-candidate Barack Obama. It was, and embarrassingly/shamefully so, their proud "see, we have black folks too!" moment. But they couldve put rapper Jay-Z atop the RNC and it still wouldn't have attracted black voters, which was clearly their goal with Steele's dubious appointment.

And now, in the wake of the RNC's new sex club scandal, these rueful conservatives are calling for Steele's head, all too happy to throw him under the bus and effectively reversing a decision that no one truly liked in the first place. I mean, a black man running the RNC?! A party with not one elected black U.S. Congressman or Senator? A party which received just 4% of the black vote in '08's presidential election? Gosh darnit, what were these crazy whiteys thinking!? What kind of boneheaded 'hopey-changey' thing was that?!

So now the Voyeur club scandal--where party officials expensed thousands of dollars at this Los Angeles sex and "bondage" emporium--is conservatives' chance to fire the black dude nobody ever really wanted anyway, and who had a bulls eye on his back from day-one. And this campaign, like the ridiculously disproportionate Tea Party vitriol over healthcare reform, is no doubt heavily rooted in racism.

Now of course, in their defense, Republicans will say, "How can we be racist in axing Steele if he was black when when we elected him?!" Normally, that would be a fairly plausible argument. But in Steele's case, his appointment was just as racist, for he was handed the reins not because of his overwhelming qualifications, but because of his skin color, which was a cheap, calculated ploy in seeking minority voters. The intended message was clear: "We'll put this unqualified black man in charge of an all-white party and you dumb minority folk will be duped into our make-believe 'big tent' and magically come out Republican." That's not racist, you say?


On another note, we could use your help at The The Adrienne Shelly Foundation. We're a 501 c 3 tax-exempt, non-profit organization dedicated in my late wife's honor, and with a simple mission: supporting women filmmakers. Adrienne, who wrote, directed and starred in the hit film WAITRESS, was killed November 1, 2006. Through the Foundation, her commitment to filmmaking lives on. We've established scholarships, grants, finishing funds, screenwriting fellowships and living stipends at NYU's Tisch School of the Arts/Kanbar Institute of Film; Columbia University; American Film Institute; Women in Film; IFP; the Nantucket Film Festival; the Tribeca Film Institute; and the Sundance Institute. Your generous contribution will go a long way towards helping us achieve this very important mission. Please click here to make a donation. Thank you.
Posted by The Ostroy Report at 7:27 AM

Andy,
You nailed the Steele situation precisely. The all-white GOP has awaited a moment to throw Steele under the bus, and wheels are rolling.

They shall be known by their policies. They have sown hate since Reagan and I hope they continue to reap what they have sown.

Conservatives always wanted Representation without Democracy, the US is a Republic so therefore it isnt Democratic, now they get a taste of Appointed Representation - Representation selected by their betters just the way they said they liked it, just get that rabble out of here so us know-everythings can make an affirmative action choice how BEST to represent you, Conservatives, so now you dont like it??

While there is a racial factor, it's really about the money. I'm amazed that the GOP has allowed Steele to remain as long as he now has. His usefulness was limited from the beginning, and now he's shown that he's going to do what he's going to do and the Party can like it! Such independence of action has never gone without retribution from the Party (ask Ron Paul, for example), and now that major contributors are balking at making new donations, his days are numbered.