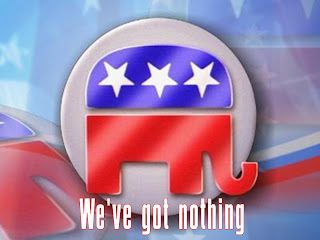 In a hotly contested election year where the stakes are huge, how will Republicans fight financial reform without appearing to defend Wall Street's interests at the expense of Main Street? The answer is simple: lie. And lie big, as always. Craft a disingenuous campaign to convince voters that regulating big banks--and thus the GOP's rich fatcat pals--will hurt the little guy. Brilliant. Turn financial reform into a populist movement. Convince the Average Joes to get all fired up, march in the streets, and fight against the very reforms that will in fact help them considerably. Turn them, once again, against their own self-interests by lying to them. As Lenin said, "A lie told often enough becomes the truth."

And where have we seen this before? If you said health care reform, you're right. The Republicans may be the Party of No, and may not have a lick of ideas of their own, but they are very effective liars, highly adept at framing issues to turn public sentiment their way. The recent health care battle is a stunning example of this. How else do you explain all the Tea Bagger rage over legislation that truly protects them and their families?

A perfect illustration of this duplicity is the "death panel" lie, where the "government takeover" of health care, according to the GOP, would result in President Obama getting to decide whether Granny lives or dies. Makes a great soundbyte. Republicans are masterful at creating devastatingly effective talking points.

Which brings us to financial reform and the Senate bill proposed by Democrats. A bill which seeks to place further regulations on Wall Street and aimed at the sort of high-risk trading practices that caused the meltdown of 2008. Here's the lie which we can bet will become the new ad nauseum "death panel" talking point:

"We cannot allow endless taxpayer-funded bailouts," said Senate Minority Leader Mitch McConnell this week. "That’s why we must not pass the financial reform bill that’s about to hit the floor. The fact is this bill wouldn’t solve the problems that led to the financial crisis. It would make them worse."

That's right. Get out there and fight, Mr. and Mrs. Average American. Fight for your Wall Street executives! We need to protect them. We need to make sure they stay rich, fat and happy, because if we attempt to rein in their reckless cowboy investment activities, that'll be bad for you and bad for America! It'll cost you in taxes! No! We must let them do whatever the hell they want, without restriction! No more 'big government' intervention! Power to the people! The Wall Street people! Financial reform, like health care reform, is terrible for you! No more death panels and bailouts! Don't let Democrats hurt you. We Republicans are looking out for you. Have your best interests at heart. And by helping us protect the insurance industry, the big banks and corporate America...we're really protecting you. God bless America!

A note of interest: McConnell himself supported President Bush's emergency $700-billion Wall Street bailout back in the Fall of 2008. Oh, how quickly those pesky little Republicans forget...
Posted by The Ostroy Report at 7:38 AM

It's great that journalists are finally calling Republican lies lies.

It would have been good 10 years ago, but better late than never.

The Klanbaggers were a much bigger deal in the MSM than they ever were in actuality. And that's how the Rushpubliscums are so able to effectively sell their lies; the MSM acts largely as their Izvestiya and Pravda.

Andy----Obama hasnt lied and is not tied in with Wall Street?

Does anyone have any ideas on how we can gain control of the media so there is a balance?
What is going on was the Repub plan all along: Control the media, control the courts, control the government, demonize those who are not on your side (Democrats), dumb down the people through lack of public education support

What they didn't count on was the election of Democrats (Clinton & Obama). Knowing all this, why would average folks (tea baggers) align themselves with the repubs?

It would be nice if the MSM bothered to give viewers facts instead of talking heads from opposing sides. Then maybe the average uniformed American would have a clue about why this country is in the toilet.

Allow me to offer a personal example of how Obama's middle-class tax breaks may yet prove beneficial to his political prospects. Based on the additional write-off options that he has included in his program, this unionized hourly worker actually saved over $3000 in taxes due this year.

Let the Republicans lie about that!

Now, if only Obama wasn't continuing to follow a plan advancing the agenda of the New World Order, advocating assassination, robotic international attacks in nations allegedly our allies, and promoting the interests of the corporate sector over the people who elected him just to mention a few items. He would otherwise be a shoo-in for re-election, dragging the undeserving Democrats behind him in 2012.

As it stands now, the Republicans can still take Obama down this November over the continuing unemployment crisis - an issue more important to economic recovery than allowing me a few thousand more dollars to pay down my credit cards before the banks clean me out - and that's no lie!