Ya Wanna Talk "Radical" Behavior Newt? How About Looking in the Mirror? 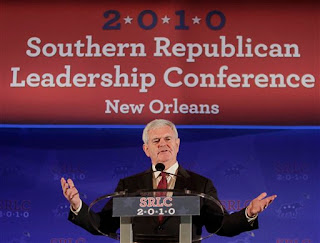 Former House Speaker Newt Gingrich is out spreading the GOP gospel with the most outlandish, false and incendiary accusations about President Obama. At the Southern Republican Leadership Conference in New Orleans Thursday, Gingrich gravely, and with quite the dramatic flair of Sir Laurence Olivier, warned the staunchly conservative crowd:

To be sure, Republicans are lock-stepping all over the "radical" talking points right now as if Karl "Turd Blossom" Rove is still emailing missives from the West Wing. But exactly where does this unconscionable, unpatriotic, unfounded claim come from? Just what exactly has Obama done that merits such an outrageously inflammatory label?

The truth is, the right has been on a racism-fueled campaign since January 2009 to deligitimize Obama's presidency. They've employed every dirty, shameful trick in the book in an attempt to undermine his reputation, his patriotism and his ability to lead. The latest vitriolic salvo, over health care reform, is simply another ruse manifested from this intense racial hatred. And they will not stop as long as they believe they can succeed.

Gingrich's "radical" histrionics are to be expected, no matter how offensive or patently false his claims. As we get closer to November's midterms, we're sure to witness a ratcheting up of this sort of dangerous rhetoric. Strap your seatbelts on, because the political landscape is going to get even much uglier.

But as long as we're on the subject of "radical" behavior, perhaps we should remind Gingrich, and the good old fashioned Tea Baggin' American patriots he preaches to, that it was he, not Obama, who is a thrice-married serial philanderer who cheated on his cancer-stricken wife; was investigated and reprimanded by the House Ethics Committee; and was shamed out of office by his Republican brethren. Sounds like pretty "radical" behavior to me. I'll take Obama any day...


On another note, we could use your help at The The Adrienne Shelly Foundation. We're a 501 c 3 tax-exempt, non-profit organization dedicated in my late wife's honor, and with a simple mission: supporting women filmmakers. Adrienne, who wrote, directed and starred in the hit film WAITRESS, was killed November 1, 2006. Through the Foundation, her commitment to filmmaking lives on. We've established scholarships, grants, finishing funds, screenwriting fellowships and living stipends at NYU's Tisch School of the Arts/Kanbar Institute of Film; Columbia University; American Film Institute; Women in Film; IFP; the Nantucket Film Festival; the Tribeca Film Institute; and the Sundance Institute. Your generous contribution will go a long way towards helping us achieve this very important mission. Please click here to make a donation. Thank you.
Posted by The Ostroy Report at 9:21 PM

"Is Obama "radical" because he's still fighting George W. Bush's Iraq war? [...] etc."
No, he is a radical because he is the best Republican ever, but elected as a Democrat! Now that's radical.
It actually shows how spineless the Democrats actually are to co-opt the Republican platform.

If the current Commander-in-Chief is so "radical," why has the DOW gone from 6K to 11K on his watch?

The GOP "radical" strategy is scaring their followers out of the markets. As the typical individual investor moves into bonds willy-nilly, the rational, large institutional smart money has been moving into equities for over a year.

You think the Tea Partiers are angry now? Wait until interest rates rise and their bond's value gets whacked.

I wish the Obama apologists would all just STFU! They have done more damage to the Democratic Party than the radical rabid right!

But the real blames lies with the demoralized progressive voters who have chosen to sulk and stop fighting.

Progressives, take a lesson from radical teabaggers! Get angry and start fighting, metaphorically speaking, of course!

That goes for you too Howard Dean. Bring back the bat!

If Obama is such a radical, how come he's extended the long-desired reach of the Pentagon into Africa? Corporatists drool at the thought of millions of undeveloped hectares of natural resources "going to waste" beneath the feet of primitive societies when it could be making more Don Blankenships. No better way to get it cheap than to corrupt the local military!

Obama is no progressive, and if he's truly radical in any way, it's in the wrong way he's been taking the nation ever since he was handed the reins. What could have been a great presidency is "going to waste" servicing corporatist globalism.

We Americans are going to regret allowing him to rule. His malfeasance makes it possible for the likes of Newtie-Pewtie to return to power to finish the job they started on us in 1980.