Dangerous Right Wing Rhetoric: There Will be Blood 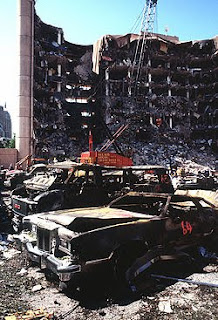 Republicans are angry. Bitter. Hostile. Resentful. Desperate. Hungry for power. And ratcheting up the hate-speak to such irresponsible and reprehensible levels that one day soon they may have blood on their hands if they don't stop.

We can blame the Tea Party and its de facto leaders--Sarah Palin, Glenn Beck, Newt Gingrich, Michelle Bachmann, Sean Hannity, Rush Limbaugh and Rep. Eric Cantor to name a few--for riling up Republicans with relentless attacks on President Obama and Democrats using code language and euphemisms like "take our country back,""reload," and "gangster government." We've witnessed racial and sexual slurs, threats, intimidation, violence, Democrats hanging in effigy...all in an attempt to delegitimize Obama's presidency through accusations of radicalism and socialism. As Cantor disingenuously claims, Obama wants "to remake America in the image of Europe."

Palin opens every speech by shouting to her audience, "Do you love your Freedom?," as if those very freedoms are truly at risk of being taken away. She force-feeds her misguided groupies with propaganda that Obama's "un-American" policies make America "less free." One Tea Party organizer over last weekend threatened: "To the elites....we're not going to be worried so much about shooting the folks who come to shoot us. We will skip several levels and go straight for their throats." The rhetoric has intensified to the point where a new poll shows that 74% of Republicans fear that their rights and freedoms are under imminent threat, vs 52% in 1996, after the Oklahoma City bombing of 1995.

"There can be real consequences when what you say animates people who do things you would never do," warned Clinton, adding that monsters like McVeigh and those like him "were profoundly alienated, disconnected people who bought into this militant anti government line." And in a NY Times op-ed Monday Clinton urged those in power to consider the potentially grave consequences of their inciting rhetoric: "...We must all assume responsibility for our words and actions before they enter a vast echo chamber and reach those both serious and delirious, connected and unhinged."

In response, right wing radio blowhard Limbaugh over the weekend attacked Clinton and warned, "You have just set the stage for violence in this country. Any future acts of violence are on your shoulders, Mr. Clinton." So what we have here is a righteous condemnation not of the despicable acts of rabble-rousing conservatives, but of Clinton's warning of their consequences. Classic case of shoot the messenger.

Make no mistake: the political landscape is an arid tinderbox that could ignite at any moment. Those like Palin, Bachmann and Limbaugh who are stoking the flames of hate will be the ones responsible if this relentless instigating turns into a heinous act of violence. It's hard to imagine how this reckless inciting of the disaffected, using the lowest common denominator, will not result in tragedy; how one of these brainwashed "patriotic" loons is not gonna pick up a gun one day and do something horrible, just like McVeigh did, for love or hate of country.

And it's a damned shame that not one legit Republican in power is willing to publicly condemn this dangerously over-the-top rhetoric. But why should they, I guess. They hope to benefit by it come November.


On another note, we could use your help at The The Adrienne Shelly Foundation. We're a 501 c 3 tax-exempt, non-profit organization dedicated in my late wife's honor, and with a simple mission: supporting women filmmakers. Adrienne, who wrote, directed and starred in the hit film WAITRESS, was killed November 1, 2006. Through the Foundation, her commitment to filmmaking lives on. We've established scholarships, grants, finishing funds, screenwriting fellowships and living stipends at NYU's Tisch School of the Arts/Kanbar Institute of Film; Columbia University; American Film Institute; Women in Film; IFP; the Nantucket Film Festival; the Tribeca Film Institute; and the Sundance Institute. Your generous contribution will go a long way towards helping us achieve this very important mission. Please click here to make a donation. Thank you.
Posted by The Ostroy Report at 7:34 AM

Yes I do believe we are heading for someone to be shot at or killed. What country is it that they want back? Is it the racist/sexist country of the 1950s and early 1960s? They want a country that is not ever going to happen again. I am white and I am a Baby Boomer. I find these folks disgusting and embarrassing. We all know this is more about a black man as president. Boy do I feel like my generation has betrayed all we protested for in the late 1960s and 1970s. I am ashamed of my generation.

Sad to say, the Repub Party is what it is. Tea Baggers are just Repubs wanting us to think otherwise. The Repubs we badly need to step forward, no longer exist. They were kicked out of the party as it became more and more extreme. If we who believe in the progressive message, do not vote in November, we are giving these folks permission to destroy our country.

Well-written and powerful, Andy -- keep up the important work!

Cantor and company want to remake the country in the image of Somalia.

It is not just prominent Democrats who are in danger from the lunatics. There could also be a Rwanda style roundup of anyone considered "liberal" in certain communities. If they receive any indication of a green light from local law enforcement that they will look the other way, anyone is in danger of violence. There will be blood in the streets and it will be the fault of Fox News and the other broadcast news organizations who are not challenging Fox directly on their Tea Party propaganda.

If Obama and the Blue Dog DINOs weren't a bunch of fascists, there wouldn't be a need for the Teabaggers. Too bad the Teabaggers are fighting the wrong battle and are on the wrong side, which is ironically with the fascists.

Since we lost most of our constitutional rights under Dubya/dick, the Teabaggers should feel paranoid, and so should the rest of us! Our remaining rights can be taken away with the passing of just one more law. The bill was recently submitted to the Senate. But it was submitted by traitors John McCain and Joe Lieberman, neither of who are Democrats.

Yes folks, we are indeed on the verge of loosing all of our freedoms, just like democratic Germany did in 1934.

With easily hackable voting machines now in place throughout the country. My guess is the winner of the next election will not be Republicans or Democrats, but Fascists who belong to both parties and hold their loyalty to the upper 1% plutocracy.

I think a 1-10 million strong sit-in surrounding the White House, Congress, Supreme Court and Pentagon for about a week should do the trick.

WE THE PEOPLE are the sovereignty, not our government employees who just represent us.

Good analogy to Rwanda. Any right-wing violence will occur in the rural areas of the West and South. There are plenty of right-wing sheriffs who may support this. I don't think the major cities would be affected since the police departments will quickly contain any crazy rednecks with guns. People in rural areas who are vocal anti-war activists or promote progressive causes would be targets. Something the big-mouth teabaggers seem to forget is that there are plenty of war veterans with left-wing political leanings who know how to use guns too. And would blacks in the South sit quietely when the teabagger bufoons take over the local courthouse? Bottom line here is the Limbaugh dittoheads would find out very quickly they will not get far. But there could be some violent episodes before it is over.

I declare that Obama shares a portion of the blame for these foul developments.

Had Obama focused last year on putting Americans back to work and stimulating the economy through those who directly affect it by spending in it for their daily requirements, the recession may well be over now. Those people who lost everything they had to pay off the very people who collapsed the economy, and being inspired to become Tea Baggers, would instead be loudly cheering their rescue by a brave and bold Obama. His goal of expanded health care coverage wouldn't have been held hostage by the base minions of the insurance industry and would now be available to follow-up the early employment triumph. Millions of people would have been released from economic servitude as the banks saw invigorated economic activity and eased up on their panic-based greed.

The Democrats should have been shoo-ins this November, like they were in November 1962 as Kennedy's programs began showing direct benefits to the people. Instead, Obama frittered away his political capital on a deluded impression that America is a rational nation filled with people of goodwill. The Republicans wouldn't have been reprieved as the blade was about to drop, revitalized by Obama's incompetence. He is about the only one who doesn't yet get this.

Maybe seeing his close aide defecting to Goldman Sachs to aid their effort to block expanded governmental regulation will do the trick? I have my doubts.

I'm no Tea Bagger, but I do have to point out that Obama has kept Bush's policies to a large extent and made some things worse. He's claiming the right to assasinate US citizens without a trial. He supported the Patriot Act and increased the bloated military budget.

Joe Lieberman was Obama's "mentor" and he campaigned for Lieberman against Ned Lamont-an anti-war candidate. Lieberman was Al Gore's running mate-he is a Democrat and that's why he got to keep his committee chair.

The only thing that's as scary as brainwashed Teabag Republicans are Corporate Democrats.