An Open Letter to Sarah Palin 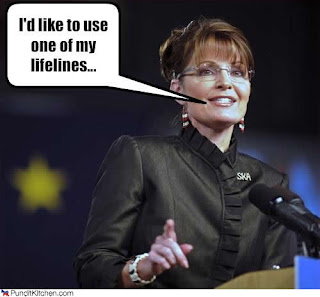 Dear Sarah:
Let me start off by saying I am not a fan. Quite the contrary. In fact, I think you're terribly misinformed, misguided, intellectually deficient, woefully unprepared, sarcastic and mean-spirited... and with a voice that is a gazillion times more grating than nails on a chalkboard. There is absolutely nothing I like, admire, or respect about you. Nada. Zippo. And I am not alone. Even most Republicans agree with me, judging from how your stint as John McCain's ill-fated running-mate was the kiss of death for the majority of conservative voters. The idea of you running for president in 2012 is laughable. A joke. A Fairbanks fantasy. You are beyond ill-equipped for the job. You stand as much chance of winning the presidency as I do. Which is exactly why I am begging you to run. Please. Run for president. And somehow also brainwash enough of your fellow misguided Tea Baggers that folks like me are dead wrong about you so they'll vote for you in the GOP primary. This is my fantasy.

In a perfect political world, you'd be President Obama's Republican challenger in the 2012 election. I'm soiling myself just thinking about it. Because you would make history. And not in a good way. Not in any way that would make Michelle Bachman proud.

No, the truth is, you would become the GOP's debacle heard 'round the world. It would be the sort of landslide they'd be talking about in Poli Sci classes for years to come. You'd become an American political case-study. Because outside of a half-dozen wacko Tea Baggers, no one would vote for you. And then you'd be a universal laughingstock and maybe then you'd finally go away for good.

So Sarah, please run. Do it for America. Give us the kind of hopey-changey stuff we're truly longing for....
Posted by The Ostroy Report at 10:46 PM

I would hope that if she gets the nomination that she would not win. I say this because so many Americans believe the lies fed to them by rightie hate radio and Fox News. (this was part of the plan all along to take over the media & courts)

I find all those pancing tea baggers rolling through the country screaming ignorant hate very scary. Why are the tea baggers 99.9% white? I am white and find them a total embarrassment.

Palin was the gift that kept on giving in 2008. Every day a new sign that she was totally inexperienced, totally ignorant, a moonbat. SHE is the reason for this new wave of hate filled racists out there, pretending they are protesting taxation, when they are merely too afraid to come out and say they are against blacks ! I get a kick out of these religious fanatics who belong to a religion that bases itself on What Would Jesus Do, and then they are out there with such Hate in their hearts ! Wonder how Palin's sarcasm will work, when she stands in front of her maker !

The fear that fills the Tea Partiers and Their "intellectual" leader Palin, is that the gov't involvement in the economy actually worked.

No maybes, it did.

The success of Obama/Pelosi/Reid and the Democrats ramming through measures that the GOP said would ruin he nation havn't.

The facts destroy their blithe mocking of anything governmental.