Can We Fire the Pope? 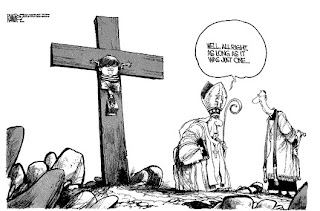 The Catholic Church is diseased right now. Amid the mounting global scandal over pedophilia, it's suffering from epidemic proportions of denial and enabling. It seems to care more about protecting its own image and interests than the faithful innocents it's been called to serve under God. Perched atop this mess is Pope Benedict XVI. And if it is ultimately proven that he was negligent in turning a blind eye to years of sexual abuse by priests under his charge--when he was Cardinal Joseph Ratzinger and as head of the oversight body, the Congregation for the Doctrine of the Faith (1981-2005)--then he must step down or be removed from the papacy. The corner office of the Vatican is certainly no place for sexual abuse cover-ups.

There are now unconscionable abuse cases arising out of Ireland, Germany, Minneapolis and Wisconsin, where over 200 deaf boys were sexually molested over a span of perhaps 25 years by then-Father Lawrence C. Murphy. The charges are beyond shocking and the acts they describe are heinous. And these are just the cases made public and over the last few weeks. To be sure, this is just the proverbial tip of the iceberg.

Despite being plagued by years of sexual scandal, the Church remains cavalier in its denial and arrogant defense of itself and of its failed self-policing mechanisms. It acts as if it's above the law and shrouds itself in secrecy, and its predatory monsters are afforded leniencies and forgiveness no other common criminal would receive. For example, Murphy, in a letter to the CDF, begged "I am seventy-two years of age, your Eminence, and am in poor health. I have just recently suffered another stroke which has left me in a weakened state. I have followed all the directives of both Archbishop Cousins and now Archbishop Weakland. I have repented of any of my past transgressions, and have been living peaceably in northern Wisconsin for twenty-four years. I simply want to live out the time that I have left in the dignity of my priesthood. I ask your kind assistance in this matter." He died in 1998, still a priest. After his death, Archbishop Weakland appealed to the Vatican to close the case: "...This Discastery commends Father Murphy to the mercy of God. And shares with you the hope that the Church will be spared any undue publicity from this matter."

What's infuriating here was Murphy's unbridled arrogance; after sexually violating over 200 young boys he felt confident enough in the Church's tolerance of these despicable crimes to ask to live out his years with the "dignity of my priesthood." Were the 200 boys left with any dignity? And it's nice to know that the Church apparently cared more about bad PR than deaf kids being attacked by this 'dignified priest.' As an aside, Rule #1 of effective PR is this: first admit the problem, then describe the aggressive measures being taken to fix the problem, and then assure that the problem won't ever happen again. That's what the Church should be doing if it's truly concerned about PR.

Upsetting as well is the excuse-making and bait-and-switching coming from the lay community. Case in point William McGurn's op-ed piece in Tuesday's Wall Street Journal in which he writes that Jeff Anderson, a victims' lawyer in the Milwaukee abuse case, has a history of suing the Church in other abuses cases: "...it's hard to think of anyone with a greater financial interest in promoting the public narrative of a church that takes zero action against abuser priests, with Pope Benedict XVI personally culpable." McGurn clearly finds it more relevant to assassinate the character of the lawyer in this abuse case rather than be outraged over the abuses, and the abusers, themselves. His position is symbolic of the overall unwillingness of the Church, and its supporters, to directly address its sexual abuse problem while blaming others.

There's also this preposterous notion that priests will not molest little children if we simply allowed them to marry and have opposite-sex relationships. The ridiculousness of this supposition is just another example of the colossal denial in religious circles. Let's be very clear about one thing: heterosexual marriage does not cure homosexuality and pedophilia. Our prisons are filled with lots of "normal" married folk who just also happen to sexually abuse children. We've got to stop looking for reasons to justify and excuse this vile behavior and instead focus on implementing real reforms that will identify, prosecute and punish the abusers.

Perhaps most infuriating is how Church officials have vociferously defended the Pope, who they claim has been a harsh and outspoken critic of the "filth" that infests the Church, citing him as an architect and promoter of reform. But it's gonna take a helluva lot more than mere words or public outcries from the Holy See to end the rampant molestation of children by its priests. We can no longer live with the double-standard that currently exists and which protects priests from punishment for their disgusting crimes and does so in a shameful covert cover-up manner. Repentance, demotions to desk duty, and other meaningless slaps on the wrist are inexcusable. These undeserved courtesies are an outrageous insult to victims, and do nothing but perpetuate the circle of horrific abuse. One thing must change immediately: whether your white collar comes from JC Penney or the Vatican, if you sexually abuse children you should rot in jail. Period.

On another note, we could use your help at The The Adrienne Shelly Foundation. We're a 501 c 3 tax-exempt, non-profit organization dedicated in my late wife's honor, and with a simple mission: supporting women filmmakers. Adrienne, who wrote, directed and starred in the hit film WAITRESS, was killed November 1, 2006. Through the Foundation, her commitment to filmmaking lives on. We've established scholarships, grants, finishing funds, screenwriting fellowships and living stipends at NYU's Tisch School of the Arts/Kanbar Institute of Film; Columbia University; American Film Institute; Women in Film; IFP; the Nantucket Film Festival; the Tribeca Film Institute; and the Sundance Institute. Your generous contribution will go a long way towards helping us achieve this very important mission. Please click here to make a donation. Thank you.
Posted by The Ostroy Report at 7:55 AM

No we can't fire the pope. The Catholic Church is run like a para military organization. The every day folks don't have any say. Besides many Catholics left the church not just because of the sex scandals. Many left because of the rabid rightie lurch after we breathed free for years under the Vatican II changes and the church's political alignment with the Repub Party. So no, the pope won't be fired. Those left in the current church are righties defending him.

I knew that Ratzinger was complicit in covering up pedophilia abuse cases before they appointed him Pope, but no one ever asks me anything. The media is covering this like it's a big new story but it has been around for years. The Church denies and obfuscates but it will never start to heal until some of those abusive "priests" do jail time.

In the course of a conversation about the weather with an Irish Catholic, I remarked that El Nino was Spanish for the Christ Child; he proceeded to go out of his mind and accuse me of attacking his faith. Personally I think the average catholic is so; for want of a better word, “brainwashed” that they perceive any remark no matter how innocent as an attack on their church and their faith and by extension themselves. No matter how much proof is offered of the atrocities committed by their church the average catholic just won’t believe it. Add to this number of Catholics in the justice system, police, courts, Supreme Court, prosecutors, etc I don’t think you will see anything approaching justice any time soon.

Two things: To be fair to the decision makers, they were only following protocol; Many of the clerics are not guilty of pedophilia but of hebophilia. That said, I am still greatly ashamed of my church for what it has done and what it has failed to do. I am also ashamed of how it treats convicted sex offenders as modern day lepers.

I have not been back to a RC church since 2005. I have since tried Presbyterian and Methodist and Baptists only to find that they too are devoid of Gospel morality.