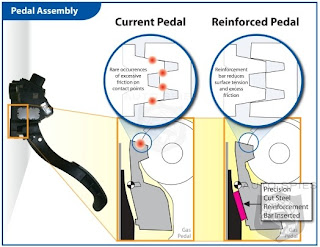 As if Toyota's recent recall of 9-million cars worldwide due to an accelerator defect wasn't enough of a disaster for the company, the Japanese automaker announced Thursday that it was now also investigating its hybrid-electric model, Prius, for breaking problems. The Prius is also the subject of a U.S. investigation.

The Prius is Toyota's wildly popular "green car," which has been a huge hit with environmentalists and eco-friendly Americans. 1.2 million have been sold worldwide since 1997, about half in the United States. The company said the new Priuses experienced “a slight unresponsiveness” of the brakes, a glitch caused by car's unique dual-braking system which can result in difficult transitioning between the two.

Toyota overall has always earned among the highest safety and maintenance ratings, becoming the engineering, productivity and financial envy of the troubled Detroit-based American auto industry. So to be recalling 9-million cars for faulty gas pedals, and drawing the Prius into the automaker's woes over braking problems, is indeed a crisis of epic proportions. Toyota's once-stellar reputation is at stake, and for the first time it's become incredibly vulnerable to the competition.

Adding to the company's troubles, U.S. Transportation Secretary Ray LaHood urged owners of recalled Toyotas to stop driving their cars immediately, but when pressed by reporters he claimed his statement was misinterpreted.

To be sure, Toyota's crisis is the biggest gift to American automakers since the government's bailout almost eighteen months ago. If Detroit is smart, we'll be hearing a lot of "Buy American" very soon. And, the industry must pounce on this once-in-a-lifetime opportunity to kick a hybrid when it's down, and use this rare window to accelerate production and marketing on its own hybrid vehicles and grab some much-needed market-share. Maybe even take the lead someday in the green-car space. But does Detroit have the savvy, resources and resolve to fully capitalize on this unprecedented gift? Only time will tell.


On another note, we could use your help at The The Adrienne Shelly Foundation. We're a 501 c 3 tax-exempt, non-profit organization dedicated in my late wife's honor, and with a simple mission: supporting women filmmakers. Adrienne, who wrote, directed and starred in the hit film WAITRESS, was killed November 1, 2006. Through the Foundation, her commitment to filmmaking lives on. We've established scholarships, grants, finishing funds, screenwriting fellowships and living stipends at NYU's Tisch School of the Arts/Kanbar Institute of Film; Columbia University; American Film Institute; Women in Film; IFP; the Nantucket Film Festival; the Tribeca Film Institute; and the Sundance Institute. Your generous contribution will go a long way towards helping us achieve this very important mission. Please click here to make a donation. Thank you.
Posted by The Ostroy Report at 7:18 AM

I live in the Metro Detroit area and work in Downtown Detroit. Michigan is the worst state in the union economy wise. We are so desperate for good news, that you bet we will capitalize on Toyota. I must say though, here in Michigan we buy American cars. It's the rest of the country that needs to wake up!

Andy,
U.S. Transportation Secretary Ray LaHood, hmmm. He was appointed by whom? This may be the political spine of regulation finally rearing its head; or it is the first shot in a propaganda war to "buy American".
Either way, if Detroit doesn't respond like Japan did in the seventies, they deserve to go out of business.

oount me in...I drive nothing but FORD!

Hi - I find this very interesting because I am still trying to figure out exactly what happened here. Your diagram was somewhat helpful but a little too small for me - I am not worrying about my toyota - Its a great car but long before this problem & I am very happy with it -
-good 4 U when buying new -- FORD - is still THE ONE!!!-