Favorite Moments from the State of the Union Address 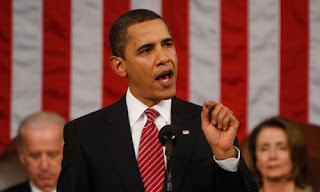 So the much-anticipated State of the Union Address has come and gone. Quite frankly, I'm not one for big grandiose, meticulously written and rehearsed, teleprompted speeches. Something about the staginess of it all makes it seemed contrived and lacking sincerity. I'm much more the Town Hall wrestling-match kind of guy. I like the unpredictability, and perhaps mayhem, of that particular forum. Nothing like catching a politician in an unscripted moment.

But I do love all the pomp and circumstance of these big televised government spectacles, replete with hokey symbolism and wannabe Monarchism. It's pure theatre. While they're often snarky and confrontational, as President Obama deftly demonstrated Wednesday night or as Rep. Joe Wilson (R-SC) did back in September with his "You Lie!" outburst to Obama, they're absent the silly wig-wearin' screaming matches of the British Parliament, or the knock-down, drag-out mega-brawls of the Japanese (personally, I'd love to see Barney Frank knock the crap out of House Republican Whip Eric Cantor sometime).

To me, the real excitement in the State of the Union Address was not what was said onstage, but what happened offstage. So in no particular order, here's a few of my favorite moments from the president's address:

-When Obama promised to repeal the "Don't ask Don't Tell" ban of openly gay men and women in the military, the Generals looked more uncomfortable than if they were getting blown by Clay Aiken

-Nancy Pelosi looking like she'd been sniffing glue all night

-Personally, I can never get enough of Eric Cantor's smug smirk

-Sen. Harry Reid (D-NV) yawning just 5 minutes into the speech, looking like he was past his bedtime at 9:05. Are we keepin' ya up, Harry?

-House Minority Leader John Boehner (R-OH) squeezing his ass cheeks so hard to avoid laughing when Obama joked that he expected some applause from Republicans after mentioning tax cuts. C'mon John, you can laugh at the other side's jokes once in a while. They won't kick ya out of the caucus

-Nothing but crickets from the Republican section when Obama discussed tax cuts. Man, nothing shows the likelihood of true bi-partisanship more than conservatives silent over sweeping tax cuts

-Justice Samuel Alito looking like he had an Irritable Bowl Syndrome attack, and mouthing "not true," when Obama chastised the court for its recent ruling on campaign finance

-Watching Republicans oddly silent at the President's promise to make banks and financial institutions pay back all of their bailout money. Perhaps TARP actually stands for Totally Amoral Republican Posturing?

-Republicans having that "are you fucking crazy?" look on their faces as Obama asked them to join him in passing health care reform

-Obama fantasizing about bringing civility and bi-partisanship back to Washington. Poor guy probably also believes in the Tooth Fairy and Easter Bunny too
Posted by The Ostroy Report at 7:16 AM

While I agree that Eric Cantor would benefit from a thorough thrashing, I couldn't find it in me to laugh about the State of the Union reception. I find it disgusting that the alleged leaders of this nation are barely more restrained in their behavior than are the students at a junior high school pep rally.

One would think that the people of this nation not tolerate such juvenile behaviors until one looks more closely at them. Then, an objective observer would note that the people of this nuclear-armed nation are hardly any better than their selected representation. Rather than be concerned that Nicholas Sarkozy is telling the world that the dollar has had its run as the world's fiat currency, and that the Chinese banks which loan us the money to keep our high school society in proms and football have slowed their lending to us, we worry about Ugly Betty going off the air and whether Conan got a raw deal from NBC.

I'm glad you found humor in such a grave farce as the State of the Union speech. At least one of us had a good time.

We are doomed and rotting from within. I blame the Repubs. They set up the current tone going back 30 years. Politics was and should be the art of compromise, but the Repubs made a deal with the devil to gain total control of the courts to make this the land of corporate greed and military might. They counted on an uninformed citizenry and we are reaping all their efforts now.

Politics should be the art of compromise....

Back in the halcyon Clinton days, Clinton would send his minions to sit down with guys like Trent Lott and meld their competing bill proposals into something that got a solid super majority bi-partisan support.

Obama's view of compromise is getting Susan Cohen or Olympia Snow drunk enough to be peeled off to defeat cloture.

You want to blame someone for the lack of compromise? Start with a president who refused to talk to the ranking members of the opposing parties for most of his first year in office.