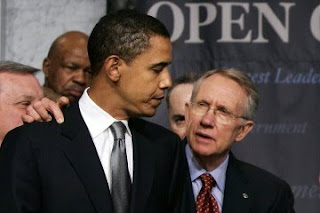 Ok, here's the deal: a new book, "Game Change," just came out reporting that Senate Majority Leader Harry Reid (NV) said during the 2008 presidential campaign that Barack Obama was a very viable crossover candidate who was a "light-skinned African-American" with "no Negro dialect, unless he wanted to have one." And hence ReidGate was born.

But, according to the 99.5% lily-white Republican Party, these poor black folk are either too naive or forgiving or both to understand just how offensive and insensitive Reid's remarks are. Thank goodness, I say, that Republicans are there to stand up for their black brothers and sisters when those racist Democrats disrespect and disparage them.

"There’s a big double standard," charged GOP Chairman Michael Steele. Speaking on "Meet the Press" Sunday morning, Steele, along with Senators Jon Kyl of Arizona and John Cornyn of Texas, called for Reid's resignation and claimed there was no difference between the "racist remarks" of Reid and those that Democrats claimed Former Senate Majority Leader Trent Lott made in 2002. At that time, Lott had expressed support for South Carolina segregationist Strom Thurmond and his failed 1948 presidential bid:

"I want to say this about my state: When Strom Thurmond ran for president, we voted for him. We’re proud of it. And if the rest of the country had followed our lead, we wouldn’t have had all these problems over all these years, either.”

Let's be very, very clear. There is absolutely no double-standard here. None. Zero. And it's highly offensive to compare the two episodes, in fact. Reid was praising Obama and calling for this young black man to run for president, saying he could win it all and promised his support, while Lott basically said America would've been a much better place over the years without all those pesky black people and their troublesome civil rights advances. Really, Republicans, Reid's and Lott's remarks have the same racist context? To the contrary, they're about as opposite in intent and severity as possible.

And while I am about as aghast at Reid's use of the word "Negro" in 2010 as I was in 1977 when my father innocently referred to our next-door neighbor as a "nice colored gal," it's important to remind everyone that we still have The United Negro College Fund in existence, and that NAACP still stands for the National Association for the Advancement of Colored People. Neither of these two monumentally important institutions have changed their official name, and both remain part of the national vocabulary, no matter how outdated, generational and undesirable they are. In that context, ReidGate is truly a non-story...except for the one Republicans want and so desperately need it to be as a distraction from what's really important in America right now.
Posted by The Ostroy Report at 8:30 PM

Andy - I know it's obvious, but this is pure partisan politics, nothing more - and we shouldn't be surprised. It's intellectually dishonest and emblematic of the sad state of politics in our country today. It's consistent with all Republicans voting in lock-step against EVERYTHING the administration puts forward or supports. If the White House supported a bill which said the sky is blue and the grass is green, the Republicans would oppose it. In an interesting twist, George Will, yes, that George Will, on This Week, took on Liz Cheney and pronounced that this wasn't a racist comment or even a big deal. Cheney, predictably went for the double standard, Reid is a racist angle and Will smacked her down. Maybe even HE is getting tired of the non-stop dishonest bashing. What a joke.

No matter how you cut it, vicious partisanship is making not just a mountain, but an erupting volcano, out of a molehill.

Considering the racist attitudes of far too many Americans who should know better, I had no illusions as to what Harry Reid was really saying. I found it an honest assessment -however distastefully put- of Obama's chances in a nation where race is likely to continue being a divisor for many more years. The fact that Obama didn't come off like, say, Jesse Jackson did mean that Obama was more likely to be deemed acceptable by people who generally won't vote non-White.

What bugs me is: who violated Reid's privacy by revealing these conversational comments to an uninvolved third-party? Such betrayals of trust can only create an environment where public stands on issues cannot even be discussed in hypothetical terms in private lest the apparent contradiction be used as a political weapon. It will make politicians of both parties much more closed and wary, and maybe even more set in stone against any change that doesn't match their public positions. It will certainly bring a welcome end to Obama's "bipartisanship" efforts, as the rise of the Tea Baggers should be deeply frightening the likes of the "approachable" Olympia Snowe into not being receptive to even hearing Obama's reasons for seeking her vote.

Suffice it to say that, while understandable, Reid has contributed to the growing impossibility of governing this nation with his comments. He played into those who seek to destroy this nation so they can rebuild it as the theocracy they think they desire. Heck of a job, Harry!