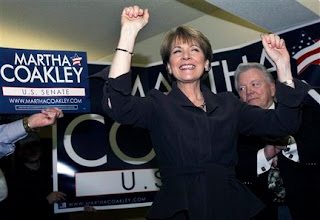 Massachusetts voters will go to the polls January 19th in a special election for the deceased Ted Kennedy's Senate seat. While there's no panic button being set off just yet--Massachusetts voters have not sent a Republican to the Senate in 37 years--a new Rasmussen poll indicates that Attorney General Martha Coakley's once comfortable lead over her Republican opponent Scott Brown is narrowing. In a political year wrought with voter dissatisfaction with Congress and dwindling approval of President Obama and his agenda, Democrats should take nothing for granted. The left must hold onto this seat if it expects to pass Obama's health-care reform bill and other measures on the Democrats' agenda.

The special election is just 10 days away, and Republicans are pulling out all the stops to win or at least come close. A Coakley loss would be nothing short of devastating. A narrow-margin victory for her in this solidly blue state could be a chilling foreshadowing of things to come in November's midterms and thus empower conservatives even further. The Democratic Senatorial Campaign Committee (DSCC) reports that the "American Future Fund, the guys who brought you the Swift Boat attacks against decorated war veteran John Kerry, are up with a $400,000 buy, smearing Coakley." Coakley's being portrayed as weak on terrorism, soft on immigration, pro-gay and pushing big tax increases. Democrats must win this state, and win big.

Please support Coakley's bid to continue the Kennedy legacy. Funds are needed immediately to combat the harsh attacks from the right. Click here to donate directly to the Coakley campaign or here to contribute to the DSCC. And please urge everyone you know in Massachusetts to vote Coakley on January 19th.
Posted by The Ostroy Report at 2:09 PM

If you please, Andy, come up with a better reason to support Coakley than to rescue Obama's pending disaster of the Senate health insurance subsidy bill. As one whose insurance package is deemed "Cadillac" and who is facing a 40% tax on coverage I hold in lieu of higher wages (for which I would be paying only 15% in income taxes), I have no reason to passively allow Obama's Frankenstein Medical Monster to eat the health care I need through forcing me to provide higher insurance company profits in trade for reduced coverage and higher out-of-pocket expenses.

Because I don't want to see the Tea Baggers use the GOP to take power in this country, I want to see the Democrats wake up and do what the nation demands. For that reason only I'm sympathetic to promoting Coakley. But if the Democrats fail me, and millions of others like me, by selling us to the insurance industry for thirty pieces of filthy silver, then to hell with the Democrats, and let the demonic Tea Baggers take the hindmost to roast as their celebratory pig.

Here! Here! Just what the republicans wanted by taxing the 'cadillac' plans. You are right in that they are ALL in on the 'pillaging' of the 'commoner'. I too am sick to death of the Dems complicity in the takeover of the health care bill and their refusal to allow a public option. It looks like it is time for a new revolution.

Yes, the Dems no longer represent the people. There will be no public option to compete against the private insurance industry (the only true way to control costs). This is despite the fact that 70-75% of the American people want a public option.

Progressives need to have a spine and do what is right -- Build the Green Party. Frankly, part of me wants the Republicans to take back the Senate because the Dems are really not offering anything!

As Suffolk DA, in lockstep with all other MA DAs, Coakley bought her political victories by promising white voters to disproportionately imprison people of color -- the en clair meaning of the code "I'm tough on crime." She delivered on her promise year after year. She continued the tradition as Attorney General. She embodied the racist white-voter pandering and fear-mongering of the past; in any new office she will habitually keep it alive.

If she squeaks by her GOP opponent, I will live with that, just as I have to live through Kerry as my entirely useless, clueless, clownish and incompetent now-senior Senator.

In demanding and begging for ANY Democrat to win every Senatorial race, you force on Massachusetts citizens a person of unbelievably low character who rose to this nomination on the well-documented dismal and inequitable suffering of African-Americans and Hispanics.

I don't know who WILL be MA's next Senator, but I know who SHOULDN'T be: Martha Coakley. The best thing anyone can say about her is that she MIGHT be marginally better than the GOP candidate.

By screaming "swiftboating!" you describe Coakley -- ever so inaccurately -- as a martyr being unfairly slandered by evil right-wingers.

That's not really the paradigm. She's a creep in a nasty race in which both sides will try anything to win.

May the slightly less creepy candidate win. The last GOP Senator, Edward Brooke, was a quite excellent public servant, and became vulnerable to defeat not for any crimes or corruption, but because of an ugly public divorce -- which had nothing to do with his work in the Senate.

Edward Brooke was a good man from another era. There is no one like him today in either party, although Bernie Sanders comes close, and Russ Feingold deserves an honorable mention.

I wish we could bring back the giants of the past, Senators like Mansfield and Baker and Dirksen, Birch Bayh and Carl Hayden and Margaret Chase Smith. I'd even go so far back as to wish for Stephen Douglas, Daniel Webster, and Thomas Hart Benton. Any one of these had more integrity than the entire Congress of today combined. If even one of these were in the Congress today, it would be a much different place. It might even be able to get something positive accomplished.