Is ABC's "The Bachelor/Bachelorette" Racist? 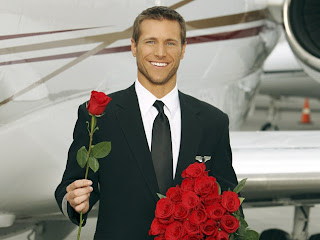 Critics of ABC's 6-year-old reality franchises "The Bachelor" and "The Bachelorette" argue that the programming lacks quality, depth and genuine purpose, having produced only one marriage, that of 2003's Trista Rehn and Ryan Sutter. There's also something else very noticeably missing: black people. Wat up with dat, ABC!?

On Monday's season premiere of "The Bachelor," hopeless romantic Jake Pavelka was presented with 25 beautiful, sexy gals from which to select his future wife, as he calls her. One after another they made their highly anticipated limo exit and awkwardly walked towards their dream-man (who unfortunately appears to have as much charisma as a gnat). One hopeful paramour even cheesily tripped right into Prince Uncharming's arms in what was clearly a staged damsel-in-this-dress moment. But not one sista in the whole entire bunch. Not a one. Not even a Hispanic chick. There was one Asian woman, but she totally freaked out poor Jake with her bizarre Vietnamese flirting, like she was Linda Blair in The Exorcist speaking in some demonic tongue. The over/under on her, btw, is not pretty.

The same glaring absence occurred on last season's "The Bachelorette," where Jilted-Jillian Harris had all sorts of guys--businessmen, artists, teachers...even several colossal assholes-- to choose from, but not one black dude. And only one Hispanic, Juan the Argentinian, but the only outwardly Latin thing about him is his name. Can't recall for sure, but I don't believe there was even a token Asian guy.

So what the heck is happening over there at ABC? Why the obvious conscious decision to keep the show lily white all of a sudden? Is there not even one smart, strong confident black woman that could've been vying for Jake's attention? Not even one successful, intelligent black man for Jillian? And I say this with a huge grain of salt, and a heavy dose of sarcasm, as the mere ethnic tokenism of these two shows over the years is insulting in and of itself. Out of 25 candidates, you'd think at least 20-30% would be black, Hispanic and Asian. Simply having one never made ABC inclusive.

For Pete's sake, in 2010 there's a black man running the White House, a black man heading the GOP house, but a black person can't get into The Bachelor/Bachelorette house? Did ABC think this glaring absence would go unnoticed? I think the public is owed an explanation.


On another note, we could use your help at The The Adrienne Shelly Foundation. We're a 501 c 3 tax-exempt, non-profit organization dedicated in my late wife's honor, and with a simple mission: supporting women filmmakers. Adrienne, who wrote, directed and starred in the hit film WAITRESS, was killed November 1, 2006. Through the Foundation, her commitment to filmmaking lives on. We've established scholarships, grants, finishing funds, screenwriting fellowships and living stipends at NYU's Tisch School of the Arts/Kanbar Institute of Film; Columbia University; American Film Institute; Women in Film; IFP; the Nantucket Film Festival; the Tribeca Film Institute; and the Sundance Institute. Your generous contribution will go a long way towards helping us achieve this very important mission. Please click here to make a donation. Thank you.
Posted by The Ostroy Report at 10:16 PM

I am white, but it is time for us to stop thinking only whites rule in the land.

BTW: Many whites are freaked out about Obama, because deep down inside they are racist.

The color of one's skin is a physical attribute like blue eyes, brown eyes, red hair, blonde hair, black hair, big frame, small frame and on and on endlessly. That is the only difference between human beings so can we please shut up about racism and discrimination based on skin color. Again, it is the content of the heart that matters and is or is not accepted as desirable. And one probably can't help it if he/she has physical preferences in another which turn him/her on.

These types of shows are for the stupid and the shallow idiots that zone out in front of their t.v.s after listening to Faux News. The bachelors and the bachelorettes are shallow, brainless idiots. Looks are everything! Money is everything! Brains are not so very important. The junk that passes for television is just that, junk!

Thank you for writing the article. It was are extremely valid. I think many readers (Anonymous....) misunderstood the article and viewed it as the show being accused of racism.

The article was a comment on the absence of diversity among the contestants/bachelor/bachelorette. Anyone who was opened minded would noted that the title of the article itself and that it was not accusatory in nature, but poses a question (or wasn't the "?") obvious..

Interesting, I would like to know if the writer has received any comments from show's producers. In the meantime, I'll keep posting my comments....
Carol-Ann, Toronto, Canada

Hi Carol-Ann....
Thanks for your very insightful post. It's truly amazing to me the type of comments I received from this particular blog. Over on Huffington Post, where it also appeared, I got about 70 comments. Most of them either attacked me for making "racist" comments aabout Juan or Asians, or, defended ABC by claiming that it's the Bacheler and Bachelorette who "pick" their 25 candidates based on personal "preference/type." So if they are not attracted to Blacks, then the producers won't put them on the show. Rubbish! And, terribly naive. Anyway, I have not heard from the show's producers and don't suspect I will.

Did you see the hateful comments on message boards that came out when Marshana was on London Calling. Same with the women on the show with her. I mean that fight and then when Matt kissed her they were like ewww why her when he can kiss us. Why would he want to kiss her gross. For one thing women competing for a man brings out some ugly you wouldn't believe. Those women almost got borderline racist. But the funny thing is the woman who goaded her into a fight got kicked off too. Now that was funny. The thing about the bachelor is that it's fake anyway.

Although i can understand that some of the Bachelors or Bachelorettes may not be attracted to particular ethnic groups.
It would be more interesting if they put women and men on the show who are from different ethnic backgrounds but who he will have something in common with the bachelor. Because at the end of the day you never know where you will find love.
That would be more interesting to watch.
People have there preference, if there preference is dark eyes dark hair or blue eyes blond hair it's not a crime but true love should be more than about appearance.

I am a black female and I am not at all offended about the choices ABC decides to use for the bachelor or bachelorette show. I am sure more than likely they choose the people based on who the selected bachelor/bachelorette would consider marrying. Folks need to get a grip! Blacks only make up about 13% of the population in the USA. So naturally this is what we will see regularly on Television and these kind of shows. With the exception of BET. I don't think it's a personal thing. It's just the popular choice.