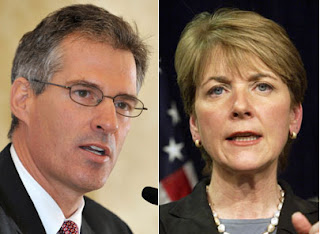 New polls indicate that Republican Scott Brown is either pulling ahead or tied with Massachusetts Attorney General Martha Coakley for the January 19th special election to fill the Senate seat held for 46 years by the father of modern American liberalism, Edward M. Kennedy, before his death in August. A loss by Coakley would be utterly devastating to the Democratic Party. A narrow victory for her is almost as bad in many respects.

Some perspective: Massachusetts is, by any measurement, America's most liberal state. In 2004, it became the first state to legalize same-sex marriage. Its citizens also voted in 2008 to decriminalize the possession of marijuana. Its entire Congressional delegation--ten Representatives and two Senators--are Democrats. Its governor, Deval Patrick, is a Democrat. In both state Houses, Democrats control 88% of the seats. President Obama received 62% of the vote in '08. Even the state's notable Republicans, such as former Gov. William Weld, have been Conservative-light. The label "Massachusetts Liberal" has become the political antithesis of "Southern Redneck." The state has become synonymous with Birkenstocks and Volvos, allegedly the chosen modes of transportation for the right-wing's much loathed granola-crunchin,' Save-the-Whales-y Kumbaya set. Let's face it: if Rep. Barney Frank were a state, he'd be Massachusetts.

Which is why the thought of Brown actually winning in Massachusetts seems about as likely as Frank winning in Alabama or Oklahoma. Not possible, right? But that's exactly what could happen on Tuesday if Camp Coakley cannot get its act together before then. Most critical at this stage will be voter-turnout: which party can drive more voters to the polls, literally and figuratively.

It would be quite a chilling foreshadowing of things to come in November's midterms if Brown miraculously squeaks out a victory or comes very close. Is it possible that after just one year in power the Democrats have become so inept that they could actually lose Massachusetts?

As the Monday holiday celebrating Dr. Martin Luther King Jr.'s birthday approaches, perhaps the Coakley team would be wise to remind the state's voters of the principles that they and the Democratic Party stand for, and those of Dr. King who, along with the iconic Ted Kennedy, would roll over in their graves if Brown is victorious.
Posted by The Ostroy Report at 7:42 AM

I am in shock. Brown is a tea bagger.

What the hell is wrong with MA?

Just wait if they do this.

We all know now that it's not the color of one's skin nor his political party affiliation, but the content of his heart that matters. I read on this blog about her "heart" and the way she administers the law in MA; and, I see how the Dems are treating seniors and other groups in the way they are governing. I'm a "Democrat for Brown.