Is the Tea Party the New Republican "Brand?" 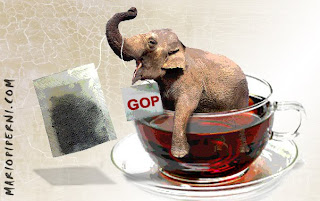 Ever since Democrats took control of Congress in 2006, and right through their 2008 widening House and Senate majorities and Barack Obama's presidential victory, much has been said about the fate of the Republican Party and its "brand."

"The Republican brand is badly damaged," said Mike Huckabee in 2008.

"The Republicans realize that their brand is badly damaged and that there's no heartthrob out there," said George Will in 2007.

"The Republican brand has been so badly damaged that if Republicans try to run an anti-Obama, anti- Reverend Wright, or (if Senator Clinton wins), anti-Clinton campaign, they are simply going to fail," said Newt Gingrich in 2008.

"It takes time to damage a brand," said South Carolina's Republican governor, Mark Sanford in 2007. "It takes even longer to rebuild it." And as we now know, Sanford's a firsthand expert at damaging a brand. The missing philander with the bizarre camping trip story, proved once again that history has one helluva sense of humor.

So what does the GOP with its "damaged brand" do? It rebrands. Which is exactly what the Tea Party movement represents. The Tea Party is the GOP's unofficial beard. As recent polls have demonstrated, Tea Baggers are little more than Republicans in wolves' clothing. And what's most interesting is how these rapacious wolves are eating their own; anyone not a card-carrying member of the far right wing has been purged (see Bob Bennett, Charlie Crist, Trey Grayson).

Under this rebranding, the party's hardline conservative leadership--Sen. Mitch McConnell, Rep. John Boehner, Rep. Eric Cantor and Rep. Mike Pence--have been deemed not conservative enough and have been replaced with rabble-rousing, narrow-minded extremists like Sarah Palin, Rand Paul, Glenn Beck and Rush Limbaugh, who represent the smallest yet most influential faction of the party.

Perhaps the Republican Party ought to rethink this new strategy. Rebranding doesn't always work. Remember "New Coke?" If Rand Paul's self-destructive behavior last week is any indication, "New Republicans" will be just as big a marketing disaster.
Posted by The Ostroy Report at 7:46 AM

The tea party has become much more than when it started. It is a haven for malcontents many of whom are moved by racist homophobic religious beliefs. Yes, there are those who do not like the Dems policies, but they are only part of this group. The GOP did this on purpose. They want power so badly they do not care if they destroy the country. Divide us so they can win. They make me sick. Fat pracing white folks (I am white) many of whom are on Social Security and Medicare screaming about their dislike for the government and its programs. WTF??????????????????????????????

I am confounded by the ad homninem attacks made against tea partiers.

One of the things that never ceases to astound me is that the party that most cultivates and attracts support from the LBGT movement would use, in a disparaging manner, a homophobic term.

Calling someone a teabagger is basically calling them a fag or gay or whatever word you wish to use.

Now I would expect that from the Archie Bunkers of the world. But from "progressive" and "open tent" people, why would anyone ever use a word like tea bagger to describe a political opponent other than to use the word in an ugly pejorative way?

The Tea Party movement? Is little more than the people who followed Ross Perot whom the Democrats really cheered on, because he was taking more Bush votes than Clinton votes.

And reinvention? Why wasn't it a problem when Bill Clinton was a "new" Democrat?

No one should make the mistake that they are speaking from righteousness or intellectual honesty.

This is about power and control and all these arguments are simply means to an end.

Wow! I am always amazed by people, under the guise of protecting others, commit the very same offenses of which they accuse others. Freud was spot-on with that "projection" thing. Look up what "Tea Bagging" actually means. You'll be surprised to see that it has 1000% nothing to do with homosexuality, and in no way, shape or form is it a "gay" slur or an attack on gays. Funny...you've used more gay slurs in your "interpretation" above that it makes me wonder just who the homophobe is here....