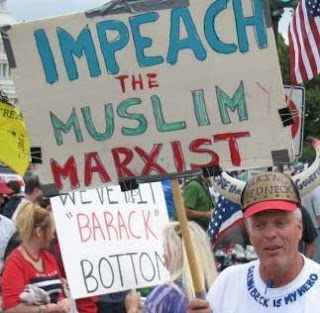 Let's get something straight: Rand Paul's "Tea Party" victory in Kentucky's GOP Senate primary Tuesday only proves one thing: that Republican voters are sick of establishment GOP candidates. It's right vs right. The Tea baggers can beat their chests and crow all they want about the "hugeness" of their movement's big victory, as Paul boasted last night, but all it portends for the party in November's midterm elections is Republican-on-Republican bloodletting. We're seeing it among the likes of Kentucky's Trey Grayson, Utah's Bob Bennett, Florida's Charlie Crist and others like Arizona's John McCain, who's facing a fierce battle for his political career from Tea Party favorite J.D. Hayworth. I say, let 'em eat their own and we'll step over the carcases in six months.

What should make Tea Baggers and the GOP shake in their over-caffeinated boots is their disappointing loss in Tuesday's only Democrat vs Republican contest, where Tea Party supporter Tim Burns lost by a wide margin to former John Murtha aide Mark Critz in Pennsylvania's 12th District to fill the deceased Murtha's Congressional seat. What makes this loss significant is that the 12th is the only district McCain carried in 2008 that John Kerry had carried in 2004, and which had tilted right leading up to the election. Will this be a foreshadowing of things to come in November for Republicans, especially those banking their campaigns, like Burns, on the Tea Party's anti-Obama/Pelosi/Reid, anti-big government, health care repeal platform? Does Burns' loss signify that the Tea Party's pot is running out of steam?

Tea Party and GOP officials are already downplaying Critz's victory, but that's not the song they sang leading up to Tuesday. This was a contest that the Party was clearly banking on:

On the Washington Post's conservative Right Now blog, David Weigel had written: "PA-12 is the only district in the country that Senator Kerry won and President Obama lost. According to non-partisan political independent analysts, PA-12 is exactly the type of district that House Republicans need to win this cycle."

Tory Mazzola, spokesman for the National Republican Congressional Committee (NRCC), predicted: "This is a seat where Democrats hold a two-to-one registration advantage, yet the race is competitive and coming down to the wire. The fact that we have a strong GOP candidate, Tim Burns--committed to job creation and repealing ObamaCare-- combined with a favorable Republican environment has turned this historically Democratic seat into a swing district."

Brian Walsh, NRCC political director: "...one thing is clear – Republicans are close in this traditionally Democrat-dominated district, and Nancy Pelosi and her liberal allies are running scared."

And Charlie Cook, Cook Political Report: "Republicans have no excuse to lose this race. The fundamentals of this district, including voters' attitudes towards Obama and Pelosi, are awful for Democrats."

"For all of their bluster about building a national wave this year...Republican policies were once again rejected when it came time to face the voters," said Rep. Chris Van Hollen of Maryland, head of the Democratic Congressional Campaign Committee.

At a time when the economy and jobs show continued signs of a major recovery, and with six months to grow even more robust, the Tea Party and GOP's anti-Obama/Pelosi/Reid health-care repeal message just might find their candidates playing golf with Burns come November.
Posted by The Ostroy Report at 7:33 AM

Rand Paul wants to destroy Social Security. As a Baby Boomer his message to me is: Drop Dead

I just can't believe the KY voters want to destroy Social Security. Millions of Baby Boomers can't be for it either.

They only thing that th PA 12th voted for was to keep the gravy train of pork rolling. This wasn't red vs blue. It was, who is going to keep giving them handouts.

Back to the time of musketts and tri~corner hats. Back as in take back the country. Back as in rolling back the Wellpoint model of dropping coverage and upping rates by 40%.

Time for the tea Partiers to go back to work.

What do you think it's all about?

The Tea Party is the "fringiest" of the Republican lunatic fringe. All Rand Paul's primary victory proves is that the nut jobs can choose the GOP nominee. NY23 and PA12 proves that that is a GOOD thing for the Democrats! Look for Paul to have his Ayn Rand liberitarian ass handed to him in the General Election

The fact that both KY Democrats outpolled Rand Paul belies the fact that the Democrats are not venerated by the average voter as the Party likes to think they are. What the Tea Baggers represent is the desire of voters for options that aren't affiliated with either major party. Rand Paul's success as a "Republican" could inspire future Tea Bagger candidates, maybe running without cover of the GOP. Their prospects for doing so are improving constantly. While Obama's shortcomings have yet to descend to the depths of Dubya's (although he's getting there quickly!), another quarter of poor economic "recovery" could take November beyond the ability of the Democrats to recover from two years of insanely stupid miscalculations. The Tea is brewing.