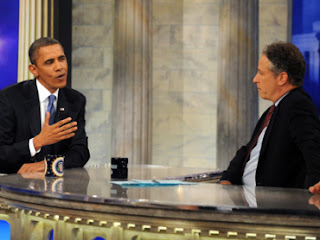 With the midterm elections just days away and bloated predictions of a massive
Republican victory sweeping the nation, President Obama has been pulling out all
stops to get out the Democratic vote, including an unprecedented appearance
Wednesday night on Comedy Central's The Daily Show with Jon Stewart, the self-described "fake news" show. It was a last-ditch strategy to reach young
people, and I seriously question the wisdom of this decision.

Obama's now being chastised by the right for denigrating the office of the
presidency by appearing with Stewart. But that's not the issue for me. In fact, I believe invading a sovereign nation like Iraq using false and manufactured evidence, or trampling on the Constitution with illegal spying, are much more egregious disrespects to the office. By comparison, these same Bush-supporting conservatives are therefore a tad disingenuous in their criticism of Obama.

My biggest problem with Obama's Daily Show appearance was that it was a dreadful performance. The president was unattractively defensive, and at times rambling, humorless, pleading and frustrated. He seemed exhausted. I'm not sure whose decision it was to put Obama on this program--let's assume his top advisor David Axelrod concocted this desperate scheme--but I suspect he's regretting it.

Obama desperately tried to convince the studio and home audience that his
administration, given the Bushevik shitstorm it inherited, has done a pretty
good job, especially with the economy, jobs and health care. I don't disagree. It/he has brought the nation back from the precipice of disaster. But his closing-argument prowess left much to be desired. He was not presidential. He was not convincing. He was not assuring. And he let Stewart best him, on several occasions. The most notable being "I don't think you wanna use that phrase, dude!" when the president said his former chief economic advisor, Lawrence Summers, "did a heckuva job." Stewart was referring to Bush's infamous misguided praise of former FEMA head Michael Brown, who notoriously botched the government's Hurricane Katrina rescue and relief effort (not exactly sure though how I feel about Stewart calling the president "dude," but I lean towards an apology being in order).

Another solid moment for Stewart came after Obama was seeking recognition for his accomplishments. "...We have done things that people don’t even know about." Stewart slyly shot back, "What have you done that people don't know about? Are you planning a surprise party for us? With millions of jobs and health care?"

And when a clearly disappointed Obama said "Jon, I love your show...and I don't want to lump you in with a lot of other pundits" before admonishing him for not cutting him some slack on the economy, Stewart deftly returned with "Not to lump you in with other presidents" before reiterating voters' frustration with the slow pace of the recovery. It was one of Stewart's patented "Oh, snap!" moments and the primary reason he is so loved by his viewers. There is no one in the media who can be so biting in such a non-threatening, nice guy way.

To be sure, appearing off teleprompter is not one of Obama's strengths. He's awful off script and is equally uncomfortable in one-on-ones. He speaks in a slow, measured monotone and comes off dispassionate and unconvincing, which is in total contrast to his unparalleled soaring oratory skills when addressing mass audiences. And when one assumes he was virtually preaching to the liberal Daily Show choir, the decision to appear, after being semi-admonished by its iconic host, let alone exposing himself to subsequent Republican ridicule, seems quite counter-intuitive.
Posted by The Ostroy Report at 7:46 PM

Republicans are remarking that Obama appearing on Jon Stewart's show was somehow demeaning? I"m old enough to remember Richard Nixon appearing on Laugh-In and I"m pretty sure saying"Sock it to me!"

I thought the President did a good job of answering what were tough questions and would have informed some who are not usually paying attention to what has been accomplished by the Democrats and President Obama. It seems petty to complain when the president is doing his best to keep the country from going backward into the corporate republicans hands so they can keep him from accomplishing anything else at all.

I didn't think it was so bad. At least he didn't have magic marker scribblings on his hand. It was a decent, and fair-minded interview. So what if it was a ostensibly a comedy show? There are no news shows.