Is It Palin Time? 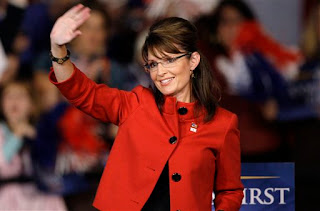 Tea Party Princess Michele Bachmann soared out of the starting gate, became the
instant frontrunner, and then started to speak. Her campaign then imploded. Tea Party King Rick Perry entered the race and overnight he became the new frontrunner. As Bachmann's fortunes fizzled, Perry was prematurely and naively anointed the eventual nominee and GOP savior. Then he started talking. And debating. And then he imploded. So with such Tea Party royalty fighting to stay alive does that make the landscape deliciously ripe for the Queen herself, Sarah Palin, to enter the race?

Perry, after three embarrassing debate performances where he's been trounced by Mitt Romney, is now a proven rank amateur on the national stage and is all but toast. As Bachmann struggles to regain some traction, albeit unsuccessfully, it's become the perfect moment for The Wasilla Wonder. Think about it: she's been sitting on the sidelines for months--spending no money and losing no political capital--waiting for Perry and Bachmann to kill each other off. Her timing could be genius.

To be sure, no Tea Bagger has more juice and star wattage than Palin. And with the implosions of the Perry and Bachmann campaigns there's no one to pick up the mantle and give the Tea Party a solid run for its money. Enter Palin. Were she to announce her candidacy she would surely leapfrog to the front of the pack and battle Romney for the nomination.

But here's where it gets real interesting. Given the general distaste for Romney among Republicans, his over sized RomneyCare baggage, and the liability of his Mormom faith, it is entirely plausible that Palin could end up the nominee.

But a Palin candidacy would virtually guarantee President Obama's re-election. Sshhhhh....hear that? That's the sound of Democrats everywhere screaming "Run Sarah Run!"
Posted by The Ostroy Report at 8:13 AM

Don't be so sure that Palin wouldn't end up the Leader of the Free World. There was a guy named Dubya, remember? And how did he get in? The first time, he was appointed by the Supreme Court, and he had 500,000 fewer votes than his opponent. The second time, he was aided by hacked electronic voting machines. Anything can happen.

Don't be so quick to make Obama the automatic winner against Palin. Weird things happen and no Democrat will be guaranteed victory against any TEA Party candidate, especially Palin. The only way Obama will retain his office is if all his supporters go to the polls. Sitting the election out will make one of the odd ball Republicans the 45th President.

I disagree that Quitler will ever be the nominee, or even get into the race. Those teabaggers are racist to a man or woman (and Cain does not change that,) and the Glen Rice revelation is already doing her a lot of damage, true or false. Her hardcore supporters will remain, but there just aren't that many of them.

The Goppers are looking for a savior at the moment, but Mama Grifter won't be that person. I wouldn't be surprised at all if somebody tries to slip Jebbo in as a "unity" candidate at the last minute.