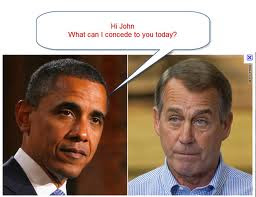 Several weeks ago President Obama announced he'd be addressing the nation after Labor Day to outline his plan to create jobs and kick start economic growth. For independents, Democrats and his progressive base, the speech needs to be a grand slam full of substance and viability and not merely another dispassionate Obama professorial lecture which lacks substance.

But even if Obama knocks it out of the park and delivers a solid blueprint for putting Americans back to work, House Speaker John Boehner, Majority Leader Eric Cantor and the rest of the rabidly anti-Obama Republican House will vehemently oppose it. As Senate Minority Leader Mitch McConnell proudly declared last year, their mission is to make Obama a one-term president. He could find the cure for cancer and they'll argue how it's gonna put undertakers out of work. So curing the nation's jobs problem is not something they're going to support.

Case in point the battle that was waged this week, and lost by Obama, over the scheduling of the president's jobs speech. Originally set for September 7th, Obama sent a letter to both Boehner and Senate Majority Leader Harry Reid requesting to address a joint session of Congress. Of course, Reid said yes. And of course, Boehner said no. The reasons? Because the GOP presidential debate is scheduled for later that night, and that there'd be little time to properly secure the Chamber on such short notice. A tug of war ensued for several days before Obama acquiesced and moved the speech to the following night.

But make no mistake, this debate wasn't about scheduling or security. It's about the Republican tactic of saying "no" to anything Obama requests and proposes. And it's precisely this sort of partisan chicanery and vitriol of which Americans are sick and tired.

And it was a huge mistake for Obama. He caved. Again. Without a real fight. Just backed off the way he's done repeatedly these past two and half years. And it's enraged his base and continues to make him appear weak, scared and lacking vision. What should he have done? Quite frankly, he should've told Boehner to fuck off. He should've kept the 7th and addressed the nation from the Oval Office instead which would appear more presidential than standing before a bunch of jeering Republicans in a pomp and circumstance show. Given the unprecedented level of disrespect they've shown this president since he took office, is there any reason to think they're gonna show him any respect that night?

As for the speech itself, he needs to go right for the jugular. He's gotta take of the gloves and attack Republicans for driving our economy off a cliff. He can't worry about coming off combative. He must appear tough and resolute, placing blame squarely on the GOP's shoulders, while instilling confidence that he knows how to combat both unemployment and his Republican enemy. It needs to sounds something like this:

"My fellow Americans....I am speaking to you tonight to offer an aggressive plan to put you back to work. A plan that will create jobs and rev the nation's economic engine again and put us back on the road to prosperity. Make no mistake, the economy stinks. It's been devastating to many, and I understand how it's been affecting each and every one of you...especially those of you who remain unemployed, with houses foreclosed or under water, and savings depleted. I'm fed up, just like you. And you know what I'm most fed up about? The constant partisan obstructionism of Republicans that's preventing me from helping you. I cannot do my job, I cannot end unemployment, if my opponents in Congress are hellbent on making me a one-term president more than putting you back to work. And that should anger you as much as it angers me. I can fix this economy and I can put you back to work, but I can't do it alone. Republicans have to stop worrying more about their own political interests than they do yours. They've got to stop worrying more about the wealthy and corporations instead of the poor and middle class. Republicans have to stop saying "no" to everything I propose solely because they want me out of office. It's infuriating that they're putting their political goals before the good of the country...and it's hurting you and it's hurting America. They're standing in the way between you and prosperity. So this is a critical time in our nation's history. A time when we can act to restore America's strength and prosperity or time for more political gamesmanship by those who are against America and root for it and you to fail. I speak to you directly right now House Speaker Boehner. I speak directly to you right now Majority Leader Cantor. I speak directly to you right now Senate Leader McConnell. It's time for you to stop obstructing and start working to put Americans back to work. They want you to stop targeting me and start targeting job creation. That's what they elected you to do last November. It's time to stop fighting me and start fighting unemployment. It's time to be Americans first and Republicans second. Enough is enough. So here's my 10-point plan to achieve full employment. I say to the Republican leadership, you can either approve this bill and get people working again or you can continue to obstruct this process and play games with America's future. The choice is yours, and I guarantee you, voters will be watching your every move. Point #1....."

And he better have a solid, actionable plan and not merely more of the same vague, over-intellectualized, esoteric drivel that he's blandly delivered multiple times. He needs to start looking at the polls which have Tea Baggin' Texas Gov. Rick Perry up 44% to his 41%. He needs to appreciate that, with the unemployment rate projected at 9% in November '12, no president since Ronald Reagan has been re-elected with a rate over 7%. He needs to accept that 72% of Americans now believe our government is not functioning properly and that our system is broken. He needs to recognize that only 45% of Americans approve of his performance, and just another 29% are happy with his handling of the economy. He's got to start accepting the ugly truth that there are people like Boehner, Canter and McConnell--those who he's misguidedly tried to make bi-partisan nice-nice with for almost three years--who were probably watching Friday's release of the zero job growth stats while shouting "Yeah!" and fist pumping in excitement. Because zero job growth is their political dream come true.

Next Thursday night's speech is Obama's FDR moment. It's just a week away. There's plenty of time for him to pull this out and demonstrate true leadership and regain some control of the debate. Let's hope he does. But I'm sorry to say that I, and millions of others, have lost faith and aren't so sure.
Posted by The Ostroy Report at 8:13 AM

Obama threw in the towel before the first round started. He has done nothing but cave to the Republicans since he was elected. I'm as disappointed in him as I have ever been in any Democratic politician.

Truth be told, I'm not convinced he was ever really on our (the people's) side. Progressives seemed to think he was one of us; he was not. For all his progressive rhetoric, for all his background as a community organizer, he has toed the corporate line all his political career, and never more so than sine he became president.

It hurts me to say it, but There is no way he is going to seize the moment and deliver the kind of speech that would put republicans on the defensive. I have waited for that moment repeatedly and repeatedly he has instead caved to republican intimidation.