How Jon Huntsman Jr. Could Be the GOP Nominee 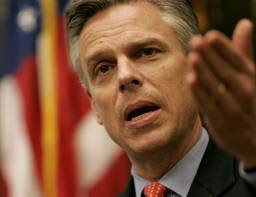 I'm gonna go out on a limb here and make an early prediction that Jon Huntsman Jr. is going to be the Republican nominee for president in 2012. By all accounts, the odds are I will be proven wrong. But I'm not so sure. I think the former Utah governor and Ambassador to China truly stands an excellent chance of winning.

To be sure, the GOP pack right now is in a state of disarray. Voters on the right are switching their allegiances as often as I cut my hair (about every four weeks). First they showed the love for Donald Trump, then Michelle Bachmann, then Rick Perry, then Mitt Romney, then Herman Cain and now the object of their disaffection is former House Speaker Newt Gingrich. A new CNN poll shows Mitt and Newt in a virtual tie for the lead, while Cain, embroiled in an embarrassing, campaign-killing sex scandal, has dropped from 25% to 14%. I suspect it's only gonna get worse for Cain.

But here's where it gets very interesting and wide-open. The current crop of Republican candidates are akin to the 'wild girls' you dated while single. They're fun, edgy and perhaps a bit more racy then the gal you plan to settle down with someday. But when it's time to walk down the aisle, you want someone mama will love. Hence, Huntsman.

Romney's problem is that he cannot break out of his 23% range because voters and the Republican establishment truly dislike him. He flip-flops so much that Birkenstock should name a sandal after him. And, he's a Mormon. Add all this up and you have serious voter apprehension, which explains his utterly stagnant campaign.

Gingrich, on the other hand, is the popular new "old" kid at the dance. He's got the momentum, and he's benefiting by the implosions of the Bachmann, Perry and Cain campaigns. But he's got more skeletons in his closet than a medical lab at Harvard. Let's not forget why his own campaign near-imploded early in the race. It's not that he's risen to the top, it's simply that the top has sunk below him. But those skeletons won't go away. He cannot be considered a serious candidate as a result. Too much personal baggage to overcome.

That leaves Romney, who is bound to stumble somewhere, somehow. But even if he doesn't, all it takes is for voters in New Hampshire to support Huntsman and he becomes the new front runner. And the rest, they say, could be history.

In the end, what it boils down to is this: will early primary and caucus voters ultimately dump the wild girls and bring a nice girl home to mama? Huntsman's smart, witty and squeaky-clean, and with his impeccable bi-partisan credentials, diplomatic and foreign policy expertise, and moderate positions he just may be the prom queen voters want to send up against President Obama next November. On paper, Huntsman certainly has the best chance of beating him.
Posted by The Ostroy Report at 7:59 AM

Isn't Huntsman a Mormon too? He definitely seems squeaky clean.

Nevah happen. Huntsman is Mormon too. That's the biggest reason Mittens hasn't broken out of his 25% range, not his flip-flopping. In '08, Mitts hit the evangelical wall in South Carolina when he'd been going gang busters in the North and East Coast, and the other Southern Bible states followed suit. Huntsman would get the same treatment. Plus, a) he's basically a kind person, and b) he's evolved beyond the stage of the primordial ooze, both immediate disqualifications for president in the current Republican fold.

Uh, hello, Mr. Huntsman is also a Mormon, so how does that fact add up to Romney not being the GOP nominee, but Mr. Huntsman landing it?

You just LOVE omitting Ron Paul from your articles dont you? Despite the fact that he has been consistently ranked in the top 3 of almost every poll and straw poll. The new Iowa poll has him at 2nd place, just 1% behind Cain. But you neer mention this Andy---why is that?? Huntsman---lol, you're kidding right?

YOU do more flip-flopping than anyone Andy. You say it's Huntsman, the its Gingrich, now it's Huntsman again! Jesus, my head in spinning from your flip-flopp-itis!

Stevie....show me where I say Gingrich will be the nominee? When I wrote about him having a strong chance now that Perry/Bachmann/Cain imploded that was before the new Freddie Mac scandal. That gives Huntsman, who've I've always sad should be the GOP nominee, a new life. This is all called analysis, pal...

Bob....I ignore Ron Paul because..well...he deserves to be. He's as serious a contender as you...