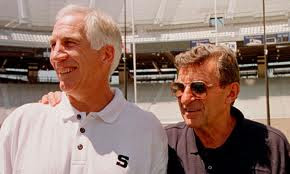 For the past several days now I've been literally sickened by the Penn State sexual abuse scandal and all the horrific images that get conjured up as a result. Nothing short of criminal charges and jail time would be a just punishment for those involved. This pathetic group includes the legendary but now disgraced head coach Joe Paterno; Mike McQueary, the then-28-year-old graduate assistant coach who witnessed the rape of a 10-year-old boy; athletic director Tim Curley; university vice president Gary Schultz; university president Graham Spanier; and that filthy piece of perverted trash Jerry Sandusky, whose reign of sexual terror on young boys most likely spans several decades. They knew of the crime(s), chose to do nothing and, worse, built a protective wall of silence around it. That makes them as complicit as Sandusky.

First off, what kind of grown man (can we please stop referring to McQueary as a "kid?") walks in on another grown man ass-raping a child and doesn't run over and beat the living shit out of him? What kind of human being witnesses that kind of sick evil perpetrated on an innocent, helpless boy and simply turns and walks away? This piece of amoral garbage goes home instead and tells his daddy about it, as if he saw some kid harmlessly bullying another kid in a schoolyard. They then told Paterno, Curley and Schultz. All did nothing. And no one called the police. Their behavior is beyond unconscionable.

And the spin? The "details" of the incident might not have been properly portrayed by McQueary. That he may have told Paterno it was some kind of "horseplay" or that something "inappropriate" had taken place, and not made a specific reference to sodomy. But does that really matter? Was the fact that a 50+ year old man and a 10-year-old boy were both naked in a locker room shower not enough? Would the fact that they were simply alone in a locker room not enough to raise a serious eyebrow? But let's keep the proper perspective here. By McQueary's own account, he witnessed Sandusky ramming his dick into this poor kid's anus. That this crime got watered down on any fucking level is beyond comprehension. How he lives with himself, how he sleeps at night, is unfathomable.

And for what? Football. Football took priority over the savage brutality perpetrated on this young victim. It was more important to protect the venerable Penn State's prestige and reputation than to protect little children from a vicious sexual predator and rapist. Those in the power seats shamefully and selfishly used that power to maintain the status quo and the $70-million that the football program generates. So beyond the shame, beyond the firings, beyond the potential criminal charges and jail sentences, the last and perhaps most fitting form of punishment would be to suspend the school's NCAA football status for 10 years and force upon it the very moral, ethical and human decency priorities it so woefully failed to recognize on its own. At Penn State, this scandal was all about football. So there should be no more football at Penn State.

And as far as all the fuss about Paterno, and whether the God of coaching deserves better treatment here? Fuck him and his iconic status. What we'll remember him by now is not his illustrious five-decade career, but rather how he de facto sanctioned the rape of little boys and then let the rapist stand, with other little boys, victims for sure, on his sidelines watching more Penn State football games.
Posted by The Ostroy Report at 8:16 AM

I appreciate your rage at the Penn State scandal, but it wasn't the football players who are to blame. Penalizing the University by taking away their right to what they worked for most of their young lives only creates 2 tragedies. As well, jumping to conclusions before all is known doesn't do anyone any good either. So if we have a conviction via the media, lets go down to State College and kill all that we as judge and jury deem responsible? And for good measure...lets shoot a few college football players just to show them our disdain for their activities that may have been near by? Yes?

Andrew, thank you for your 100% accurate detailing of this sickening scandal and whats worse, the top network news story every day/night -ad nauseum. To me, worse is the behaviour of these Penn State students, sopping up their parents and taxpayers money for the privilege of getting a college education - not a football education. A higher education is not a right -it is a benefit and advantage for a successful future -these kids are our future? - and they vote? - sadly for too long colleges have put their sports, especially football money, and outstanding players ahead of their obligation to educate! The riotous support these students have demonstrated for these sick, twisted adult perverts, is very disturbing, especially to those of us who did not have the advantage of sliding from high school to college - we had to slide to work!!