The Debate: What Would Ali and Frazier Do? 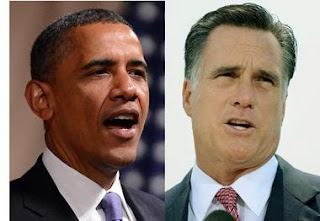 Tonight's the big showdown. The main event. Obama vs Romney. It's got the excitement and buzz of a heavyweight prize fight. Only in the past week, instead of staring down and psyching out their opponents, as boxers usually do at weigh-ins and press conferences, these two politicians, and their surrogates, have so effusively praised the other guy to the point of it being more over-the-top than a Lady Gaga concert:

"We know Gov. Romney has been practicing for months,” said Obama senior adviser David Axelrod. “I think the invasion of Normandy took less preparation than he's putting into these debates. So, I expect he'll be prepared and ready, and will be strong in these debates."

"President Obama is a uniquely gifted speaker, and is widely regarded as one of the most talented political communicators in modern history," said Romney's campaign adviser Beth Myers.

Even the candidates themselves got involved in the verbal lovefest:

But what if prizefighters did lavish the same kind of praise on their opponents before a battle? What would a typical Ali/Frazier press conference have sounded like back in the '70s?

Reporter: Muhammad, in what round do you predict you'll knock out Joe Frazier?

Ali: Knockout?! Are you kidding? Have you seen his left hook?! He'll probably knock me on my ass in Round One!

Smokin' Joe Frazier: Cassius, you are too kind. Your left jab's a killer and your rope-a-dope's gonna wear me out. You'll drop me with a right to the head  before I could say Howard Cosell!

Ali: Seriously, Joe's an incredible fighter. Probably one of the best, if not the best ever.

Frazier: No, it is Ali who truly is "The Greatest!" I'll probably suffer the same fate as Sonny Liston! Ali's gonna win.

And with that they both hugged and wished each other a good fight...
Posted by The Ostroy Report at 11:46 AM