My Rockaways in Ruins 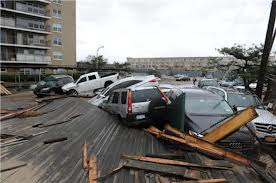 I spent Friday afternoon in Far Rockaway, a little burg along the coast in Queens, NY where I grew up in the beachfront Wavecrest Gardens apartments. It was an idyllic place in the 1960's and '70's. The sea air. The sound of crashing waves. The boardwalk. The arcades. The Good Humor ice cream truck stationed all Summer in the circle. 9pm fireworks. Riding my bike all over town like Fred Savage in The Wonder Years. That was a long, long time ago. And now, because of Hurricane Sandy, my beloved Rockaways is in a state of disaster.

The extent of the crisis can be felt soon after crossing the Gil Hodges Bridge, traveling along Beach Channel Drive through Belle Harbor, a seaside community that’s been ravaged by the storm. There’s a palpable sense of the devastation as piles upon piles of housing debris become visible along the road, as bulldozers clear the washed out, burned out neighborhood. Further down the peninsula, in Arverne, there’s a convoy of National Guard armored vehicles that pass.

There's abandoned cars, damaged homes and cops at every corner. Even in the daylight the loss of power is stark, as all the stores, except for the rare bodega with a generator, are shut and the people's faces, as they mill about trying desperately to figure out when and where their next meal will come from, are full of anger, frustration and fear. In many ways the place more resembles war-torn Afghanistan than a borough of New York.

At the East end, in Far Rockaway, we dropped off food at several makeshift relief centers. At our first stop, God’s Pentecostal Church on Cornaga Avenue, we were greeted like family. Tables were set up for both clothing and food distribution. Within seconds of placing a dozen trays of hot food in front of the volunteers, a line of thirty people formed.

“Where you from?” one organizer asked me, smiling at me, my girlfriend Phoebe and my daughter’s Emily and Kim. 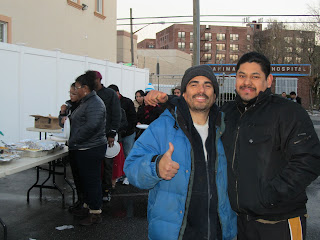 “Who are you with?

“Thank you, man. We really appreciate you helping us.”

“I grew up here,” I told him, pointing to the recreation center next door. “I used to play basketball there.” His eyes lit up and he high-fived me.

“Alright man, so you know what we’re going through here. Welcome home bro.”

“You’re not alone,” I assured him.

We asked where another center might be, and he told us to head to St. Mary’s Church on Central Avenue. We arrived there in 3 minutes, but they weren’t as organized as the last site and, surprisingly, passed on our offer for hot food. I stood for a second staring across the property at the lawn where, over forty years ago, I used to play tackle football.

Back in our two-car caravan we headed out in search of another center, winging it this time. We stumbled upon a little outpost off Beach Channel Drive on Nameoke Avenue. It was starting to get dark, and the folks there were hurrying to shut the small operation. It, like many others, sits behind tall metal gates that are quickly shut once the sun sets. No one wants to be on the streets after dark, and I can understand why. There’s been looting, mugging and robberies, and people are afraid. It’s a scary place and getting scarier by the minute.

A few people there said they needed food, so we dropped of some baked ziti and soup. Phoebe had been out in the Rockaways earlier in the week, and as she passed out food a sad little boy of about seven looked up and asked her, “Do you have any cupcakes?” Within two days she and our friend Daniela had gotten several Manhattan cupcake establishments-- Billy's Bakery, Molly's Cupcakes, Butter Lane Cupcakes, Buttercup Bake Shop and Georgetown Cupcake NYC—to donate dozens of boxes.  There were several small children hovering as the adults hurriedly packed up before complete darkness fell. We put the cupcakes down and the kids grabbed them with a fury.

A few blocks up Nameoke we came across what would be the most organized of the centers we visited, The Church of the Nazarene on the corner of Central. It occupies what used to be the Mel Chevrolet dealership where my parents bought their new yellow 1969 Impala station wagon for a mere $3500. There’s a FEMA presence there but the effort’s been organized and is run by the church's Orlando, Fl-based disaster relief team...a small army of committed folks who piled into a command trailer and mobile kitchen and drove 1000 miles to help. It’s run with the efficiency of the U.S. Army. They were thrilled to receive the grub and cupcakes. The hot stuff went right into the food line and the sugary treats were gone in a matter of minutes.

“Do you mind if I grab one of these for our volunteers?” the food director asked, holding a cupcake box. These volunteers deserve a helluva lot more than cupcakes for the incredibly selfless work they're doing.

There's talk that power and water may be out until Christmas. That's six weeks away. I can't fathom how the people of the Rockaways can handle that. They’re already terribly hungry, cold and unbathed. They’re afraid for their children, and at night, for their own lives. The elderly, many of whom are sick and needing medical care, risk dying if conditions don't improve fast.

It’s an absolute disgrace. The federal government isn’t doing enough. The City of New York isn’t doing enough. Relief organizations, like the Red Cross, aren’t doing enough. LIPA, the Long Island Power Authority, isn’t doing enough. Thankfully, there’s been an army of volunteers who’ve been filling the void as best they can. But it could be a very long, hard, cold and perhaps violent Winter if people’s lives aren’t restored, along with their electricity and water, back to normal soon.
Posted by The Ostroy Report at 7:27 AM

Extremely moving and well-written piece, Andy, thank you for this.

Now we see the bottom line. It was easy to write-off the govt's lack of response to Katrina as typical because it was the brown people being ignored.

I know Far Rockaway and the 101 Pct. have a high incidence of crime, but the majority of people seriously affected by Sandy, and ignored, are in three working class enclaves that are unique in NY.

It's the class of people being affected here along with the minority population that was decimated in Katrina that is important. Balck, white, Hispanic... doesn't make a bit of difference. We don't mean shit to the plutocracy.

I grew up in Belle Harbor and like you are devastated with the conditions on the peninsula. I am writing to let you know, not much has changed since your article. Most still do not have heat, power, communication, shelter - there are STILL not Red Cross or FEMA Shelters in The Rock. Allegedly, NYC has to give FEMA the green light to bring in trailers. Evidently, a Noreaster (when FEMA closed for bad weather, is that the sign said) then freezing temperatures and now snow and STILL no shelters or trailers - can you write another piece, and make some noise about this? How much more can these people take?

PLEASE keep writing about The Rock - Bert Elliot and I organized a benefit in one month to raise funds for the graybeards -- it was this past Sunday so it is still growing, but last I heard we had raised $25,250 and things there are still awful -- look at what this woman says -- we need to make some noise! http://ireport.cnn.com/docs/DOC-891071