Karl Rove's Back and He's Pissed! 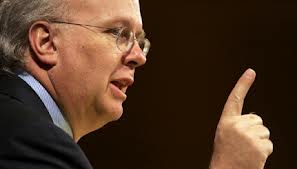 Gentlemen...let the civil war begin! Karl Rove, the former Bush operative-turned-superPACman, is creating a veritable shitstorm in the Republican Party with his new Conservative Victory Project, an offshoot of his American Crossroads super PAC. The project is squarely taking aim at the Senate, vowing to support conservative candidates it deems more electable in an effort to win back GOP control.  It's the establishment crazies versus the Tea Party crazies. What could be more fun for a raging lib than to see right-wingers eating their own?

You have to admire Rove. After getting his ass pummeled in the 2012 election dispensing hundreds of millions of big-donor bucks to Mitt "Remember Me?" Romney and countless House and Senate hopefuls--with an ROI so low it's unfathomable how he could raise another nickel--he's back trying to steer the party's future once again.

"Hello, I'm Karl Rove, the guy who almost single-handedly destroyed the modern Republican Party with my devious, race-baiting, vitriolic, polarizing antics. And now that the party's lying in a pile of obliterated rubble, who's better to straighten out this clusterfuck than the guy responsible for it?!

The guy who put the crazy in GOP crazy has now decided the GOP's too crazy to win elections anymore. Enter the Conservative Victory Project, which believes candidates who more resemble ousted moderates like Richard Lugar (IN) and Bob Bennett (UT) are the future saviors of the party. It's back to old school for Rove.

Perhaps Rove's right this time, and the Tea Party wackos must go if the current irrelevant rape-obsessed, homophobic, xenophobic, anti-science Republican Party is to ever become relevant again. But the biggest question is, does anyone give a shit what Karl Rove has to say anymore?
Posted by The Ostroy Report at 8:06 AM

If he wanted to help the GOP, he'd try to join the Democrats and destroy them. He's not a builder, he's a wrecker.

Rove and all the other repubs have not learned a thing from the 2012 election. Putting up golden boy Rubio without any policies changes won't fool anyone.
They are stuck in the past with old white angry repub men. Young voters just want them to all die out so we can move on. Sad.