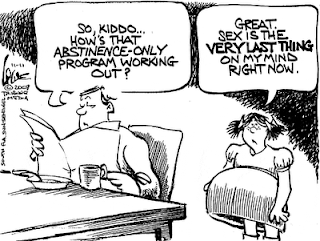 Teen pregnancy. It’s a problem for which Republicans have historically argued a common-sense solution, and it’s not contraception or sex-education. Their fix is simple and straight-forward: abstinence. Just keep the penis out of the vagina. So how come the same philosophy doesn't apply to gun violence?

In the wake of the Sandy Hook massacre the nation's attention has once again shifted to gun control and the need to ban semi-automatic weapons and high-capacity magazines as well as enact tighter restrictions overall. Most agree that the level of gun violence in America has risen to epic proportions. But the National Rife Association and virtually all Republicans contend that the last thing that needs to be factored into the gun control equation are the actual guns. Instead, their focus has been almost exclusively on background checks, registrations, mental health screening, video games and anything else that can take the gun out of gun control.

It's terribly contradicting that conservatives don't support contraception and sex-ed as a means of reducing unwanted teen pregnancies. How come, when it comes to a 15-year-old getting knocked up, it's the weapon, in this case the penis, that's to blame? If the same philosophy is applied to guns, i.e. taking away the actual instrument that does the damage, that would result in a dramatic reduction in gun violence, right?

But the problem is that when it comes to guns and sex, Republicans cannot think rationally. Ironically, their "abstinence" philosophy has terrific merit if applied to guns, but completely convoluted when the subject is teen pregnancy. If only they believed in education and mental health when and where it truly mattered.
Posted by The Ostroy Report at 7:19 AM

Funny, I thought Republicans only blamed the woman for getting pregnant. After all, it wouldn't have happened if she weren't such a slut who led the guy on. Silly Andy - men are NEVER responsible for anything in Republican La-La Land! (*snark*)

Strange argument but if you follow the logic of it then are not liberals guilty of the same thing? Teen pregnancy is the result of lack of education and is a behavior problem but gun violence is caused by the guns.

This is a stupid comparison and void of any logical thinking, instead setting up a partisan argument for liberals. If only you believed in rationale thought when it truly mattered.