Gay Boy Scouts: What Are Conservatives So Afraid Of? 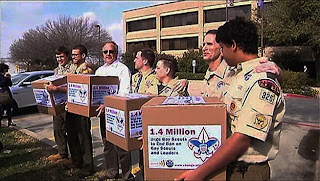 Here's the thing that I find fascinating about conservatives: they think that simply banning the things that terrify them actually make them go away. Of course, logic and reality dictate otherwise. This phenomenon is most prevalent when the subject is homosexuality...be it relating to gay marriage, gays in the military or gays in the Boy Scouts.

The Boy Scouts of America this week announced that it's delaying until may a decision on whether to lift its ban of gay scouts or scout leaders. This comes on the heels of recent buzz that the organization was very close to ending the ban as early as this week.  As expected, the specter of such a decision has been met with intense opposition, rooted in a frustrating and unsurprising cocktail of ignorance, intolerance and religious fanaticism.

So let's get right to the chase then. Banning gays from the Boy Scouts doesn't mean there'll be no gays in the Boy Scouts. Just like there's no way for conservatives to keep gays out of the military (fighting for your freedom), the schools (teaching your kids), hospitals (keeping you healthy/alive), politics (making your laws), police and fire stations (keeping you safe), television and film (entertaining you) and yes, your beloved sports teams (fueling your machismo). All a ban does is give these narrow-minded fools a false sense of security: "if I don't actually see gays then they're not there, right!?"

Get over yourselves already. It's 2013. It's time to stop the discrimination.
Posted by The Ostroy Report at 7:24 AM

I just don't get it. I was a Girl Scout for years. It was not about sex. It has been brought out that the Mormon Church is behind the blowback. Since the decision has been stalled, it looks like the Mormon plan is working. Sad.

The cocktail of ignorance also includes simple stupidity .. a lack of rational logic ... lack of ability to understand cause and effect ... relative risks, data etc. The fear is rooted on an irrational fear so ugly that the news media avoids talking about it. Ignorant people correlate homosexuality to being a pedophile. They believe there is risk to their children. If that is the goal .. I bet there is a lot better data to profile pedophiles than sexual preference. Ban football coaches!

It may be hard for you to let go of your Leftist assumptions, but try.

Homosexuality and transgenderism are parent-caused personality disorders that are preventable and treatable.

GayScam is ending. The people of this country are ending it.

You have been lied to by the Left for your whole life.

You people are amazing. How hard is it to understand that straight people don't want their kids indoctrinated by gays?

Wy do you insist on pushing your radical agenda on the rest of the world?

These comments are here for one purpose: to show the rest of us how ignorant some people can be

wow... there are scary folks out there

The cocktail of ignorance also includes simple stupidity .. a lack of rational logic

Also the spoke of Hollywood, where Hollywood writers seemed to put a gay person on every single sit-com and at least one scene or character in every single movie - stating that wasn't right because there just are not that many gay citizens in our country by proportion. Then they spoke of the ""gay agenda" in our politics in Washington DC, in our entertainment manufacturing, at our college campuses, and claiming that the GLBT crowd was preying on adolescents who are going through their own hormonal awakenings, thus, in a way brainwashing them as they are confused about the changes in their own bodies.