An Open Letter From the Spirit of Ronald Reagan 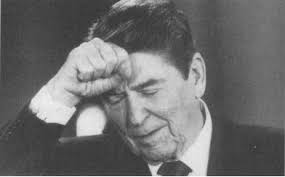 What the heck has happened to our party!? I don't recognize us anymore, and haven't for many, many years. I can't believe what we've become. This is the party of Lincoln? Of me?

I've listened for years now as candidate after candidate invokes my name as the standard-bearer of the Republican Party. Of the conservative ideal. I'm the one they all want to be like. The one they compare themselves to every five seconds. My coattails are filthy from their footprints. But to paraphrase Lloyd Bentsen, I know me, and none of these jokers are equipped to shine my shoes.

They should all be ashamed of themselves. Not just for destroying the party I loved so much, but for shaming America with their myopic, bigoted world view. And for their unprecedented obstructionism. And for creating such toxicity with Democrats that Washington has ground to a legislative standstill.

We've become not just the party of 'no' but the party of 'nothing.' We don't stand for anything anymore. We have not served those who voted for us. We are selfish, self-serving, petulant and angry. And that's the part I just don't get. Why all the vitriol? The hatred? The inability to talk with each other? Why has "compromise" become such a dirty word?

Back in the day, you disagreed with someone, found the middle ground, and moved onto the next subject. As I liked to say, if I could get 70-80% of what I wanted, that was considered a good day. Today we have leaders who vow never to agree to anything Democrats propose. Everything is summarily rejected, no matter how harmful this intransigence is to the country.

We can't even pretend to hold a hearing on a president's Supreme Court nomination. All this nonsense about "lame duck appointments." Shameful. Do they not remember that I nominated Anthony Kennedy in November of my 7th year, and that his hearing and confirmation took place in my last? Do these fellas not even respect the Constitution anymore? Is nothing sacred in their partisan war?

And, who the heck is this Donald Trump character? What rock did he crawl out from? He's the best we've got? Have our voters gone mad? Must we pander to the lowest common denominator? We're talking about the nomination for president of the greatest nation in the world, for Pete's sake, not host of some pathetic reality show.

I watch as Trump mocks, denigrates and offends everyone from minorities to women, immigrants to people with disabilities and war heroes. I shudder at the language he uses at his rallies. Not just the curse words, but the racist rhetoric that's been inciting violence. My God, are we really going to nominate this dangerous, destructive, polarizing individual to head our party in the general election?

Donald Trump has campaigned on the "Make America Great" theme. How ironic. He's turned the nation backward to its darkest, ugliest days. Remember the old "Keep America Beautiful" ad from '71? The one with the Native-American man crying as looks out onto a littered landscape? Well, when I see the political pollution that's destroying my beloved America today, the tears stream down my face.

My message was one of hope, strength, positivity and patriotism. Of taking an already great America and making it even greater. Trump's message is not my message. His ideals are not my ideals. And if I could vote in November, well, gosh darnit I'd be voting for Hillary Clinton.

Posted by The Ostroy Report at 7:38 AM